A few weeks ago, I posted part I of a guest blog by former Cressey Performance intern, Henry Lau. Like an asshat, I completely forgot about posting part II until Henry stopped by the facility yesterday to train and gave me the look of death. Without further ado, here’s part II.

NOTE: for those you missed it, click HERE for part I.

So, how did Bruce do it? How was it he was able to transform himself from a blobby 223 lbs to a svelt 170 lbs in less than a year? As I noted in part I, many of his friends, colleagues and family members have been dumbfounded by his astounding progress – and rightfully so.

As it is, he’s referred many of them in my direction since many of them are eager to follow the exact same program he followed. I ask them if they live their lives exactly the way Bruce does as well as take the same medication? Invariably they say no, and I respond with “how are you supposed receive the same plan Bruce did and expect the same results?” Fair question, right? Everybody’s bodies and lifestyles are different, therefore requiring different lifestyle changes.

Bruce continues to make great progress. He asks himself daily if the decisions he makes will, in turn, take him a step forward or a step backward. If he happened to fall off the wagon and eat something he shouldn’t have, he made the necessary adjustements to ensure he was right back on track the same day! Unlike many, he wouldn’t have put it off until the following week because he knew it would hurt him in the long run.

Being able to get right back on track made him very consistent in losing weight; he held himself accountable to his actions at every step. Additionally, having others hold him accountable was very helpful as well. All his friends knew he was trying to lose weight, so if he did anything incongruous, they would be all over him about it. No one would bring him cookies or pressure him into drinking because everyone was supportive of his goal. Those two factors: consistency and accountability are huge contributors to any fat loss goal.

Note from TG: this is why surrounding yourself around like-minded people, and building a social support network around you is so intergral in terms of success. Get rid of the “cancers,” and good things will happen.

Now Bruce’s exercise programming was pretty simple to start. As much as I’d like to say I’m the world’s best coach in terms of fat loss, it wasn’t that at all (although I’m really good). I gave him a workout based on some principles geared towards fat loss that he could easy follow and be consistent with. It wasn’t some cookie cutter program that you buy online, or a workout made on the fly. Contrarily, it had planned workouts day to day for a month at a time (solely based off his individual goals and needs) as well as new phases that were continually added based off the constant feedback he was providing.

To give you an example, here’s what a sample day looked like for Bruce:

Iron Work (the part where he lifted heavy things)

When any limitations arose – whether from weaknesses of certain muscles or lack of mobility – we would incorporate exercises to improve those areas in the next phase. By the time he was hitting his stride, not only was Bruce’s diet working for him, but his body was functioning more efficiently, too.

His first phases was two total body workouts a week and one day of regular cardio. Now as much as I hate prescribing regular cardio, it was something Bruce could do and would complete. This lasted for about four weeks. Afterward, we progressed to three total body workouts per week with one day of interval training. All in all, we stuck with this format for roughly five months with each training session lasting about one hour, and each cardio session running about half an hour.

Fast forward to today, Bruce now trains about 3-4 times a week (see above for sample day) doing a higher volume of work. It’s not complicated, but something Bruce can do on a regular basis and adapt to at his own pace. To remind you, every week he’s made progress, even though he wasn’t doing a super intense program when he started. Rather than focus on unrealistic goals equivalent to what you often see on shows like The Biggest Loser, we chose instead to focus more on small, manageable goals to ensure he’d see consistent progress moving forward.

By the end of our case-study, Bruce was pain free in his legs while walking up stairs, could carry his groceries without lower back pain, and was able to run around and play sports with his friends when he couldn’t have before. Prior to all of this, he never could have imagined living his everyday life without some semblance of pain and/or limitation. I don’t know about you, but that is definitely something you can’t put a price on.

The Nutrition Side of Things

With regards to nutrition, what Bruce worked on the most was simple: eating less processed food (think white flour, sugar, pre-packaged foods) and making a concerted effort to include more whole, natural foods into his daily diet. Incidentally, it wasn’t hard for Bruce at all since he loves stir-fries, salads, nuts, hummus, and yogurt.

He isn’t very picky with his food choices so this made it easy to suggest things. A sample day for Bruce looks like this:

Breakfast – A cup of yogurt with fruit, and some hummus with carrots or a two egg omelet with a ton of veggies.

Note from TG: I’m telling you right now, get yourself a Vidalia Chop Wizard – it makes prepping and storing veggies in bulk easy peezy, lemon squeezy.

Lunch – A sandwich with deli meat and tons of veggies in it or a chicken Caesar salad.

Dinner – A type of stir fry with chicken or steak with a mix of veggies.

Looking back, Bruce said what helped most was eating tons of veggies (as you can see above), cooking with fresh ingredients for taste, and eating foods low in calories. He had tons of food, but nothing was very calorically dense. Moreover, he also said cutting out (highly processed: bagels, potato chips, 100 Calorie Snack Packs) carbohydrates helped him a lot because it taught him that what’s really important is the quality of the foods you eat.

The biggest problem, however, was staying away from alcohol; that took a lot of willpower. He still has a few drinks once every 2-3 weeks, so he didn’t completely take it out, but at least he’s now more cognizant of the deleterious effects that excessive alcohol intake can have on body composition.

Of note, and this may come as a surprise to some, he did not take any sort of protein powder tor fat loss supplement. I recommended he not drink any type of shake because, at the end of the day, those were calories that could be eaten using whole foods. Instead of drinking a 300 calorie protein shake he could have a steak. Awesome. There is a reoccurring theme here: he consumed less than what he usually did. The serving sizes were not overwhelming, but he wasn’t starving himself either.

Now, while Bruce’s entire program does not seem very complicated, I took certain principles and applied them to the best of my knowledge and ability. He did use a low-carb diet because it worked for him. It does not mean everyone has to eat low-carb to lose weight. As well, Bruce’s exercise program wasn’t anything too advanced. The fact of the matter is, it doesn’t matter what program one follows: the one that is actually going to work is the one they’re actually going to follow. Most importantly, though, all it takes to lose weight and keep it off are a few lifestyle changes that include consistency with the program, accountability for yourself, and determination to stick it through.

Just to recap now. Bruce has lost over 50lbs, he went from 223lbs to his current 170lbs. Just to remind you, he did this all with hypothyroidism, a real metabolic disease.

There is no reason to blame your own metabolism for not being able to lose weight because here is an individual who has a real metabolic disease and still lost a ton of weight! Need proof? Check out the sweet before and after pics below! 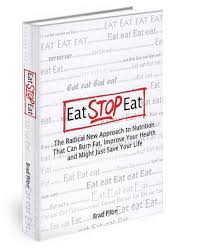 He would do this about 2-3 times a month on the days he would not work out. Eat Stop Eat is a book written by Brad Pilon that dispels huge myths in this health industry, talks about how to lose weight effectively, and keep it off. I remember reading it back in Spring of 2009 and thinking about how to apply the principles I learned. It is very research based and goes against a lot of bro-science that is taking over lately in the media. Definitely something a lot of people could use and is a great read to give you a different perspective on things.I have used a lot of recipes from this and used some of the methods applied in this product. It was very helpful in terms of helping build Bruce’s diet.

I bought this back in 2008 and have used many of it’s principles with my clients since then. It was a awesome back then, but John Berardi and his team have since updated it with additional sections and more information. Definitely something to pick up if you need some information on nutrition.

The workouts in here were definitely helpful in the last few phases I am doing with Bruce. They are something different than the workouts we have been doing and are based more on work and volume. They also break everything down for you, so there is no thinking needed or having to put together your own workout. It has been tested and used with many individuals with success. Beginners should probably start with a basic program, but definitely something and intermediate or higher experienced individual can use towards their goal in fat loss.

Fair warning: This will not be an all-encompassing post on how to train the shoulders or how to program around nagging shoulder injuries. Frankly, I don’t think anyone wants to read a Dostoyevsky length diatribe on shoulder impingement or how improving scapular upward rotation leaves me sexually aroused. Yep, I’m weird. Instead I want to give… END_OF_DOCUMENT_TOKEN_TO_BE_REPLACED