Registered Dietitian Quote of the Week: “Flax Seeds Are a Waste of Calories”

One of the many things I dig about my girlfriend – other than when she actually dressed up as Princess Leia the night we attended Star Wars in Concert last winter – is the fact that like me, fitness is a passion of hers. Some couples like to play Sudoko together. Other couples like to spend their time attending wine and cheese tastings and wearing sweater vests. We, on the other hand, like to crank the techno, chalk-up our hands, slap each other in the face, and deadlift together. Okay, we don’t slap each other in the face, but there’s no denying the fact that we’re pretty much the coolest couple ever. What can I say, we kinda like each other.

It’s not a surprise, then, when my girlfriend starts telling me stories of discussions she’ll often have with close friends of hers on any given topic from why lifting heavy things is good for them to helping them understand that two pieces of celery and a Diet Coke doesn’t constitute as a “treat.” To say that she gets mildly frustrated at times is an understatement.

This was never more evident than last week when she told me about one of her fellow interns that she had a conversation with. As it happens, as part of her internship, my girlfriend has to drive out to Western Massachusetts once per week, and as a result, her and the other girls will often car pool together. Given that they spend upwards of four hours in the car, it’s understandable that outside of the naked pillow fights, and lip syncing marathons to Baby, One More Time (both of which probably don’t happen except for in my dreams), they talk about, “stuff.”

Knowing that she’s a fitness buff, the other women will often ask my girlfriend questions on how to get into shape or what things they should be eating. Without batting an eye, Lisa will straight up tell them that they need to be lifting (heavy) weights, as well as making a concerted effort to eat less processed foods. She’ll often point them towards my blog, or even suggest they read The New Rules of Lifting for Women. 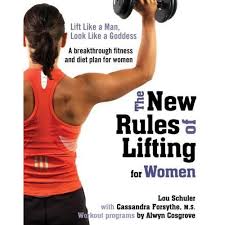 Anyways, getting to the heart of the matter, last week Lisa was telling me about how she’s been trying to convince one of the other interns, Victoria, to read the book and give it a go. Understandably, Victoria was a little intimidated – which shouldn’t come as a surprise since many women are brainwashed into thinking that lifting appreciable weight will make them “big-n-bulky” (as if it’s an easy thing to accomplish) and that spending an inordinate amount of time on the elliptical trainer or taking Pilates classes is the best way to shed fat and attain that “lean, long” look (Jesus, I hate that term) that many women aspire to have. Nonetheless, she caved, bought the book, and LOVED it.

Being told that copious amounts of cardio is really an inefficient way to approach things, and that eating REAL food (including FAT!!!!) is actually a good thing was a real wake up call for her. Victoria was buying into it, and making small, manageable progress to boot. Awesome

Fast forward a week or two, Victoria decided it was high time to visit a nutritionist/registered dietitian to get some semblance of structure and individualization. Now remember, she had been reading the book, and my girlfriend, too, had been encouraging her to try things like flax seeds and whole eggs instead of her usual bagel and cream cheese. Things were going really, really well.

Upon hearing that she was including flax seeds as part of her daily diet, the “dietitian” said, I kid you not:

“Why? Flax seeds are a waste of calories.”

Riiiiggggghhhhhhttttttt. Cause we wouldn’t want to give people an excellent source of fiber, healthy fats, and to a lesser degree, omega-3s in their diet.

Note: Alpha-linolenic acid (the type of omega-3 found in flax seeds) isn’t converted that efficiently in the body to EPA/DHA.

Nope, wouldn’t want to do that. What’s more, this dietitian went on to put Victoria on a 1350 calorie diet. This, for a woman who has NEVER dieted before and quite frankly, is probably used to eating double that on any given day.

Talk about setting someone up for failure right from the start. This would be analogous to me taking someone who has never lifted before in his or her entire life and having them perform a one-rep max test for the squat, followed by a few rounds of 400 meter sprints. They’re going to be sore as shit the following day, and the likelihood they’ll ever come back again – let alone exercise consistently – is slim to none.

By being too aggressive too early, and not taking into context someone’s starting point, you set people up for failure. Not always, of course. But it’s definitely more common than not.

So why such a “shot-gun” approach by this dietitian? Of course, I’m not trying to insinuate that she shouldn’t reduce calories and clean things up a bit. But come on – 1350?????? Should it come as a shock to anyone that by the middle of the week, Victoria was hating life, miserable, hungry, and hit up a local McDonald’s drive thru?

Hell, I think that describes 95% of the people who start a quote-on-quote “diet.”

Here was someone who was actually excited to train and prepare her meals – seeing PROGRESS; and then this “dietitian” comes along, and does nothing but confuse her even more. What ever happened to starting off with baby-steps? Maybe, have her learn to make better food choices and focus on getting more lean protein in her diet? Or teach her the importance of post-workout nutrition? Heck, teaching her how to incorporate more fruits and vegetables into her diet would be a step in the right direction.

Instead, she tells Victoria that flax seeds are a waste of calories and that she needs to basically starve herself in order to see results. Does anyone else see this as completely ass-backwards? Is my logic off? Chime in, please.

Fair warning: This will not be an all-encompassing post on how to train the shoulders or how to program around nagging shoulder injuries. Frankly, I don’t think anyone wants to read a Dostoyevsky length diatribe on shoulder impingement or how improving scapular upward rotation leaves me sexually aroused. Yep, I’m weird. Instead I want to give… END_OF_DOCUMENT_TOKEN_TO_BE_REPLACED