Sorry for skipping out on updating the blog yesterday. As you might have imagined, I’m still recovering from the weekend’s festivities. As I alluded to on Friday, it was my girlfriend’s b-day, and to say that the weekend was jam packed would be an understatement. We had all sorts of fun activities planned: early morning training session, lunch and dinner in and around the city, birthday get together with friends, and yes, there was a spa treatment thrown in there for good measure.

Was I out of my element? Hell to the yes. Did it hurt my ninja status? You’re damn right it hurt. It hurt like a bastard. But I persevered, and at the end of the day I like making my girlfriend happy (yep, I’m sucking up). And, to be perfectly honest, the cheese spread in the lounge area was to die for. OMG!!!!

In addition, another reason why I was unable to blog yesterday was because I received the first draft of the new artwork for my brand spankin new website from the guys over at Ennui Design. I kinda felt like a kid on Christmas morning when I saw what they had sent me.

Needless to say, Jason and the crew are doing a bang-up job, and I can’t wait for all of you to see what’s in store. I sent back some feedback yesterday and should receive the updated revisions soon. It’s going to be off the hizzle.**

All told, I’m hoping to have this puppy up and running either by the end of the month, or early December. Stay tuned………

On that note, as I mentioned above, Lisa and I got up early Friday morning to head to the gym to get our swole on. Well, she taught her spin class, and I just went off and did my own thing, which happened to be day two of phase four of Show and Go. 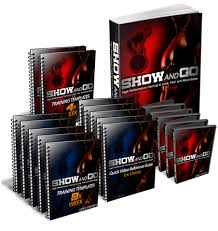 That said, almost without fail, every time I train at a commercial gym I can’t help but observe what other people are doing (or lack thereof). It really dumbfounds me what people “think” constitutes as exercise is actually nothing more than them just moving their arms around a little bit doing absolutely nothing. I also love how every gym has that one guy who tries to be the one-upper.

As an example, I had just finished a set of low incline alternate DB presses with the 85 lb dumbbells (don’t judge me, it was 6:30 in the morning), when this guy (wearing his tight wife beater no less) walks over and grabs the 100s and plops right next to me. He proceeds to do his set going maybe 1/4 of the way down – elbows flared out, feet up in the air – you know, being a douche.

When done with his set, he throws the DBs down to the floor as if to say, “that’s how you do it.” I just kinda chuckled, did my last set, and went about my business listening to Wu-Tang.

More specifically, though, I can’t help but wonder how some trainers get away with some of the absolute garbage they have their clients do. I watched one trainer as he literally “activated” his client’s glutes for a good 15 minutes. Afterwards, he really laid into her and had her perform some one-legged step-ups onto a BOSU ball while she curled a pair of five lb hand weights. That’s what I like to call sarcasm.

When all was said and done, she could have gotten more for her money if she just decided to flush it down the toilet.

Even more disheartening was the fact that pretty much everyone was using every fancy contraption OTHER than a barbell or dumbbell. It’s funny how people tend to gravitate towards the $3000 machine that targets the “inner pecs,” but fail to realize that the $80 barbell sitting over there in the corner can do the the job and then some.

Which brings up a point I want to make.

Last week I finished one of the more entertaining books I’ve read in a while called Brain Candy. In it, the author had a brief quip on the effect of placebos and how it’s getting harder and harder to introduce new drugs into the market because, interestingly, it’s getting harder and harder to beat placebos. In effect, unless a new drug is able to “beat” a placebo, it will never see the light of day.

Which got me thinking: Wouldn’t it be great if this same process was used in the fitness industry? Anyone who’s been up past midnight has undoubtedly come across one of those whacky informercials touting the latest gizmo designed to get you those 6-pack abzzzz you’ve always wanted. For a mere introductory price of $49.99, plus your first born child, you too, can have a lean mid-section.

Thing is, I have yet to come across any machine that can out-trump pushing yourself away from the table. Want to save yourself $50 plus shipping? Eat less.

Similarly, you’d be hard pressed to convince me that any machine can out-perform a power rack and a barbell. As well, while many will spend an inordinate amount of time on their favorite eliptical that coveniently has it’s own tv, fan, and massage therapist, I can’t think of many “machines” that are any better than a stop watch and a kettlebell in terms of elevating your heart rate and kicking the shit out of yourself (if that’s your bag, of course).

You guys picking up what I’m putting down, or what?

** I have no idea what that means.

People are often surprised when I state I’m an introvert. Confessions of an Introverted Strength Coach What most people fail to recognize is that “being an introvert” is part of a spectrum. No one is 100% introverted, nor are they 100% extroverted. Everyone’s a little of both. Another common misconception is that introversion is somehow… END_OF_DOCUMENT_TOKEN_TO_BE_REPLACED

I can sense the eye rolls already. “Really, Tony? A post on New Year’s resolutions? How profound and unimaginably unique!” Touche. I can appreciate that there’s no shortage of similar posts you’ve undoubtedly come across in recent days. You’re likely thiiiiiiis close to introducing your forehead to the keyboard in front of you.  What could… END_OF_DOCUMENT_TOKEN_TO_BE_REPLACED