Admist all the other blogs and websites out there, you happened to stumble upon mine.  I don’t know anything about you, but it’s readily apparent you’re off the charts intelligent.  And good looking.

Here’s a little bit about me.

The fitness me anyways.

No one wants to hear about when everything really got started…back in 1976 when my parents bumped uglies and made me. That’s just gross and a little bit too much TMI.

My parents (I mean “Santa”) gave me my first weight training set. One of those Joe Weider thingmabobbers with the cement weights covered in plastic.

I can’t recall why or what drew me to lifting weights, but I do know watching my fair of Arnold Schwarzenegger movies as a kid played a major role.

Anyways, that Christmas was a huge one.  To say I was a little excited would be an understatement. Here’s a brief reenactment that morning running downstairs, turning the corner, and seeing what was in front of the tree: 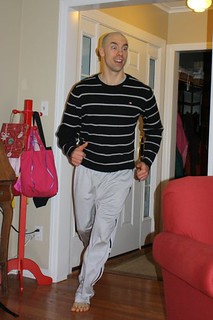 The Rest, As They Say, is History.

I grew up an active kid. You name a sport and I played it. Baseball, basketball, soccer, wrestling, swimming, kickball, and a ton of bike riding.  I was even an avid bowler. Yes, I was in a league. And yes, I had my own ball and pair of bowling shoes. As you can imagine, I had to beat off all the ladies with a stick.

Eventually, though, I gravitated towards baseball. I made the Junior Varsity team as an 8th grader. I was “called up” to the Varsity squad when I was in 9th grade, and by the time my sophomore year arrived I was a starting pitcher and infielder.

I’m not going to sit here and brag about all my accolades – 1st Team All Conference as a Junior and Senior, no big deal – but I will say that I was one of the rare athletes from my hometown (Groton, NY) to have the opportunity (and honor) to move on and participate in collegiate athletics.

I played two years at Onondaga Community College in Syracuse, NY where I was named Most Valuable Pitcher both my Freshman and Sophomore years and I also made All-Conference and All-Region my sophomore year.

Note:  that’s me in the top right-hand corner

From there I earned a scholarship to play at Mercyhurst College (now Mercyhurst University), a Division II school located in Erie, PA.

Long story short, I played two years there and unfortunately there wasn’t much demand for a 6-1 right-handed pitcher who’s fastball sat in the mid 80s. I wasn’t drafted.

I had a handful of professional (invite only) tryouts, but nothing transpired.  I was sad.

Alas, I moved back to NY and decided to finish up my degree locally at the State University of New York at Cortland.

The Fork in the Road

I could either 1) enter academia and become a health teacher (and have to wear a tie everyday to work) or 2) work in a gym and wear sweatpants to work everyday.

The choice was easy.

I worked in corporate fitness for three years just outside of Syracuse in a small town called Skaneateles in addition to working as a personal trainer part-time in the commercial gym setting.

In the fall of 2004 I met Eric Cressey for the first time in person. We knew each other through various fitness forums on T-Nation.com and a now non-existent RuggedMag.com.

That is correct: he and I met on the internet. Much weirder back then than it is now.

In the fall of 2005, after Eric graduated with his Masters from UCONN, he convinced me to move out to Connecticut. He and I worked at Ridgefield Fitness Club for a year and then we both moved to Boston in the fall of 2006.

When I first moved to Boston I worked at SportsClub LA (which is now Equinox), a very high-end commercial gym located right in the heart of the city, across the street from Boston Common. It was there that I really started to hit my stride as far as my own continuing education as well as starting to dabble in some writing.

In 2006 I had my first article on T-Nation published. In addition, due to a client connection, I had the opportunity to write a fitness blog for The Boston Herald titled Step-Up. <— Not my choice for a name, but whatever.

In the summer of 2007 Eric Cressey, myself, and Pete Dupuis opened up Cressey Sports Performance.

What started out as just the three of us working in a 2600 sq. ft space in the corner of an indoor batting cage facility training local high-school athletes and general fitness population grew into a 15,000 sq. ft facility, and I’d argue the foremost baseball training facility on the East coast (if not the entire US).

In the fall of 2015, after eight years serving as strength coach, I decided to leave CSP and venture off into the horizon. I now train people at my own spot, CORE, located in Brookline, MA.

But Back to Me

I love coaching. I love that I get to work with such a wide variety of clientele on a daily basis. I love getting people stronger and helping them buy into the mentality of setting performance based goals (whether that’s hitting a 2-3x bodyweight deadlift or helping a female client perform her first, strict un-assisted chin-up).

As a coach I feel it’s important to take everyone’s training history, experience, and personal goals/needs into consideration. As much as I love lifting heavy things, I understand (and respect) that not everyone cares about how much they can squat or bench press.

Moreover, it’s crucial to take into consideration one’s current status and unique injury history. Being able to asses one’s movement quality and to ascertain what’s the best approach to get them from Point A to Point B in as time efficient and as safe of a manner as possible is kind of important.

What works for one person won’t necessarily work for the next.

Which is why, as a coach, I feel it’s important to not only talk the talk, but walk it as well.  I don’t just write about training people.  I actually train people.  Like, in real life.

I’ve been doing it for well over a decade now, amassing thousands of client contact hours (in a non-creepy way), helping hundreds of people feel better, performance better, and live better lives.

Oh, I’m also obsessed with Star Wars, Matt Damon, beef jerky, and hating on Tracy Anderson. And, I have the cutest cat in existence, Dagny.

UPDATE: I now have a kid, too. Holy shit. He’s pretty freakin cute as well.