Preparation H Makes Girls Want to Hang Out With You

First off I want to give Fox News a high five for actually running this story and deeming it “news” worthy (click link to view video of story). It’s nice to know that they realize what’s important and run stories that really make a difference in people’s lives. I wouldn’t be surprised if down the road they have a story asking a panel of experts “who would you rather have babysit your child: the inside of a shark’s mouth or Britney Spears?”

Anyways, lets get back on topic, this is serious stuff here. Apparently the new “rave” of the New York City club scene is for dudes to slather up their torsos with the hemorrhoid cream Preparation H to make themselves look “ripped” for the ladies. No I am not making this stuff up. 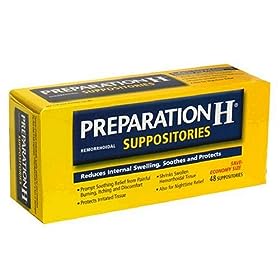 According to Rob Fitzgerald, a New York bouncer, blogger, and author, he’s noticed this trend amongst men waiting outside to enter the clubs. Fitzgerald asked one of these guys to describe the practice for his blog:

“The way you use it is to take your shirt off and rub it all over yourself before you go to the club. If you want to get (lucky), you have to know how to dance, and if you want girls to dance with you, you have to look ripped.”

Truer words have never been spoken my friend. If there is anything I have learned about women it’s that:

1. They love dudes who can do the robot.

3. That’s about it. Point. Set. Match. Now who’s spinning tonight at the club?

As Lauren Cox reported on ABC News (man, this was an important story, even ABC got in on it):

“Preparation H contains a medication called phenylephrine HCL that — when used for the drug’s intended purpose — will shrink the swollen tissues of hemorrhoids. It works by constricting the nearby blood vessels that feed blood and fluid to the area.

But the ingredient doesn’t discriminate what kind of tissue it will shrink, hence the underground beauty tips of applying Preparation H under the eyes, on love handles or other places.”

Fitzgerald noted that many bodybuilders have used Preparation H (mostly on their obliques) to take away any lingering water weight before shows. To put it very simply, P to the H takes water out of the skin (via vaso-constriction) and makes you look shredded.

Of course, the above scenario is debatable, and not without its drawbacks. Many have noted allergic reactions, breaking out in rashes and/or hives all over their body. Additionally, Dr. Darrell S. Rigel, clinical professor of dermatology at New York University Medical Center in New York City has noted that Preparation H can have more serious side effects inside the body. Since the active ingredient works by constricting blood vessels, Preparation H has the potential to raise blood pressure.

That’s weird, they obviously forgot to mention some other common side-effects–namely coming across as extra “douche-baggy,” and increasing your chances of being drop kicked in the face by my foot. Always read the warning labels people!

Today’s guest post comes courtesy of Minneapolis based personal trainer and nutrition coach, Megan Schall. Megan’s been a distance coaching client of mine for a number of years (I write her training programs), but is someone I’ve referred many other clients to when they have any nutritional needs or questions. She’s an awesome coach. I’m… END_OF_DOCUMENT_TOKEN_TO_BE_REPLACED

Today see’s the return of a TG.com OG…George Kalantzis. George is a long-time friend and colleague of mine. We first crossed paths when he started as an intern at Cressey Sports Performance over a decade ago. He then transitioned to a full-time coach where he spearheaded CSP’s Strength Camps. In the years since George has… END_OF_DOCUMENT_TOKEN_TO_BE_REPLACED