First off, sorry I’ve been slacking on the blogging front as of late. I know everyone’s day is not complete until they’ve had a little dose of awesome, but I had some personal issues to tend to at the tail end of last week and had to take a little hiatus. And while many of you may think that spending my weekends as a secret ninja spy who makes out with models while driving a Ferrari doesn’t constitute as a “personal issue,” all I have to say is that you’ve clearly never tried driving a Ferrari. I can’t drive stick. Dammit!

In any case, it was a rough week and I just want to say thank you to all those who were there for me and continue to do so.

So I figured I’d make my “come back” with a little bit of a WTF moment. Here is my good friend Eric Cressey at his last meet deadlifting 650 lbs at a body weight of 174 lbs.

Since Eric posted that video seven months ago, most of the comments left consisted of high praise. That is until two days ago, when someone, who calls himself cyberdave03 left this moronic comment:

“Your lower back is significantly rounded during the lift. This is putting you at great risk for a disc herniation.”

Oh brother. Wanna know what else that is at a great risk of happening? Me wanting to throw cyberdave03’s head into an oven. I’m guessing cyberdave03 has never lifted anything heavier than his pen holder, or I don’t know, his Captain Kirk PEZ dispenser. Furthermore, he probably doesn’t realize that more people injure their back bending over to tie their shoes than deadlifting. And yes, I realize that more people in this world tie their shoes than deadlift, so simmer down guy who is going to to be a smart-ass and leave that comment. Is Eric’s “lower back significantly rounding” during this lift? I’d argue, not even close. Sure, he may be rounding it slightly, but he’s definitely staying out of those 2-3 degrees of end range motion, which would actually place him at risk of herniating a disc. And lets not forget, IT’S FREAKIN 650 LBS!!!!! A maximal effort deadlift is not going to look remotely close to picture perfect deadlift form.

The reason why it looks like he’s rounding his lower back significantly is because he IS rounding his upper back (kyphosis), which is due to the fact that it’s nearly impossible to maintain scapular retraction while pulling that much weight. On a side note: look at the backs of elite powerlifters and you’ll always see monsterous “upper” erectors compared to their “lower” erectors. With people who have a history of low back pain, the opposite is usually true (because they tend use their lower back too much).

How come no one is ever concerned for a high jumper’s back? No one ever tells them, “hey dude, that’s way too much extension there. You could really increase your risk of Spondylolysis (fractures) and spondylolisthesis (vertebral slippage).” 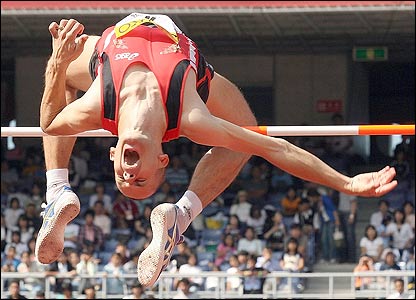 Or what about overhead athletes, such as pitchers?

Look at the third picture (arm acceleration) from the sequence above. This is the point in the delivery when a pitcher reaches maximal external rotation and elicits 7500 degrees/sec of internal rotation torque force on the shoulder, and 2300 degrees/sec of extension torque force on the elbow (AKA: the equivalent of hanging a 40 lb dumbbell from the hand). Ouch.

The point is, when you’re referring to anything that requires someone to get up from sitting in front of their computer and actually doing something remotely athletic, “stuff” just doesn’t look pretty. Get over it and shut up.

Back tweaks are an inevitability. They happen to people who lifts weights regularly, and those who just look at weights. They happen when doing something as inane as bending over to tie your shoes, as well as when you’re doing some less inane, like, fighting crime at night. They happen on a Wednesday. There’s no… END_OF_DOCUMENT_TOKEN_TO_BE_REPLACED

Hello, hello! I know. It’s not lost on me that I’ve been an abject failure on the “writing new content” side of things. If it’s any consolation I’ve also been lackluster on a few fronts: Calling my mom. Avoiding pizza. Not (not) being jacked. Hugs. My free time has been monopolized by what can only… END_OF_DOCUMENT_TOKEN_TO_BE_REPLACED