Yep you heard it here first – according to a local exercise physiology TA:

Deadlifts are one of the worst things you can do for your spine.

Last week one of the readers of this blog emailed me and couldn’t believe what he had just heard. He walked into class and overhead the TA talking to another student.

They said “something something deadlifts something something”, and since I love the deadlift like a fat kid loves cake, I asked what they were talking about. At that point they said “its one of the worst things you can do for your spine”. I talked about how a proper deadlift with a good flat back is great for you, and that a shitty deadlift will hurt you (a shitty anything will hurt you). They were un-swayed, and he mentioned how someone had him doing deads off of a 6 inch box and “it destroyed my back…not in a good way.” 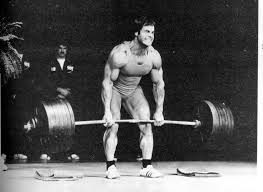 Oh where to begin. I don’t quite understand the mentality of some people today. Between squats being too dangerous and making our inner thighs flabby and deadlifts being one of the worst things we can do to our spine, what are we left to do: Easy stuff like Pilates and leg presses? Both of which are the equivalent of a nuclear bomb going off in your spine?

I know many of the political pundits out there like to go on and on about how we’ve fallen into this “wussification of America” mentality (everyone gets a trophy, there are no winners and losers, kickball being banned, can’t say Merry Christmas without offending someone), and after reading stuff like the above, I couldn’t agree more. We ARE a bunch of wussies.

So, lets try set the record straight and see if we can hit this TA over the head with a bucket of idiot sauce.

Point #1: Wolff’s Law and Davis’s Law. You can’t discount physics. The former states that bone in a healthy person or animal will adapt to the loads it is placed under. The latter states the same thing, except with regards to soft tissue.

Deadlifting = strong bones + soft tissue. You need a minimal essential strain (MES) in order for tissue to adapt. Likewise, in order to strengthen tissue, you need to load it. Sorry, but your cute little leg extensions and leg curls aren’t going to get the job done.

Point # 2: If we were to take a peek at the Nachemson Chart, which is a measure of intradiscal pressure (pressure on spinal discs) in response to compressive load, we’d see that PROLONGED sitting in a slouched position (you know, what you’re doing right now as you read this) places almost as much compressive load as a deadlift. 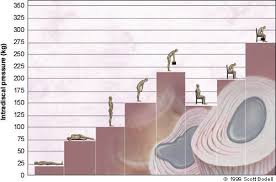 As a matter of fact, my good friend Bret Contreras had these zingers to say on this very topic:

Obviously regular sitting wouldn’t give you more intradiscal pressure than really heavy deadlifts, but I would definitely agree that prolonged sitting is more deleterious on the spine than deadlifting. You’ve got prolonged intradiscal pressure, plus sitting decreases glute activation by several mechanisms : compression on the tissue, neurological reciprocal inhibition of the hip flexors, and mechanical inhibition of end range hip extension due to adaptive shortening of hip flexors.

Point # 3: I’m biased. You’d be hard pressed to convince me otherwise that the deadlift isn’t one of the best overall exercises for hypertrophy, not to mention the best functional exercise you can do with respects to posterior chain strength, core stability, glute activation, power development, and transference of force throughout the entire body. And lets not forget: a heavy set of deadlifts will make any woman within a two-block radius spontaneously conceive. True story.

And if that doesn’t convince you, one of the smartest guys in the industry, Gray Cook, produced an entire dvd on why EVERYONE should include deadlifts in their programming. Are you going to say that lifting a bag of groceries off the ground “is one of the worst things for your spine” too?

Point # 4: I’d agree that deadlifts, when done incorrectly, are horrible for the spine. However, as myself, Eric Cressey, Mike Robertson, Bret Contreas, and countless other coaches have noted: when coached correctly – with a neutral spine and with a proper hip hinge – they’ll do more as far as “bullet proofing” the body than any other exercise. Furthermore, as Bret noted, deadlifts teach the glutes to share the load which spares the spine.

Point # 5: And while we’re at it, there’s this guy who’s kind of a big deal, Dr. Stuart McGill, who’s essentially the world’s ninja when it comes to lower back research. He wrote two books, Ultimate Back Fitness and Performance and Low Back Disorders (you should check them out), and in not so many words noted that the trunk extensor muscles (longissimus, iliocostalis, erector spinae, etc) do a really good job of counteracting shear force on the spine. 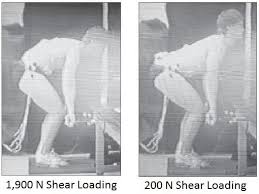 Point # 6: Since Bret Contreras is more of a research geek than I am, I asked if he’d send me some words of wisdom/studies that would help debunk this nonsense.

Granhed et al. (1987) found that powerlifters were able to sustain 4,824 lbs of compressive loading during the deadlift. Theoretically this load is too high for the spine to handle. According to the authors, “the study showed that intensive training will increase the bone mineral content (BMC) to an extent that the spine can tolerate extraordinary loads.”

Still think deadlifts are bad for the spine?

Here’s what I think happened. This TA did his 135 lb (HINT: that’s not a lot) deadlifts from a six-inch box (something I would only have ADVANCED lifters do), with atrocious form. He tweaked his back and all of a sudden his n=1 conclusion was that ALL deadlifts are bad. Ehhhhhhhh. Wrong, thanks for playing.

Being human means being enamored by a litany of things in the health/wellness/physical preparation realm. Some people are easily swooned by fancy watches and elaborate looking exercises Others by cryochambers and Paleo recipes that taste like sawdust. I am not here to play judgement police. For the most part, everything has a time and place… END_OF_DOCUMENT_TOKEN_TO_BE_REPLACED

Back tweaks are an inevitability. They happen to people who lifts weights regularly, and those who just look at weights. They happen when doing something as inane as bending over to tie your shoes, as well as when you’re doing some less inane, like, fighting crime at night. They happen on a Wednesday. There’s no… END_OF_DOCUMENT_TOKEN_TO_BE_REPLACED