1.  Wow – what a scorcher of a weekend we had up here in Boston.  It reached 104 degrees on Friday and 100+ degrees again on Saturday….with close to 100% humidity, no less.  It was awful.  On the bright side, however, yesterday was a cool 80 degrees and I decided to make it an “academic quarantine day,” where I set up shop at a local coffee shop and plugged away at my last presentation for Muscle Imbalances Revealed – Upper Body.

As it happens, Rick Kaselj – the mastermind behind the Muscle Imbalances Revealed series – just sent me a link with the final draft of the graphics attached (which you can see to the left), and it looks freakin SWEET!!!!

I’m really excited to see how this whole thing turns out, and even more excited to find out people’s reactions when they realize that I did both of my presentations with no pants on.  HA!  Just kidding.

Note:  for those not in the know – all of the presentations are Power Point presentations that we “record” on our computer screens and you basically listen to it as you go.

Anyways, for those curious, my two presentations are as follows:

Corrective Strategies for Overhead Athletes (and Meatheads, Too!):  in a nutshell, I basically outline some common upper body pathologies seen in the overhead throwing population and then discuss how to assess, correct, and program around said pathologies.

Avoiding Common Programming Bloops and Blunders: Rants, Diatribes and Observations of a Strength Coach:  as the title suggests, I discuss things that people do that inevitably make my eyes bleed.  You know, stuff like benching with their feet in the air, training the rotator cuff to fatigue, not having a clue as to what proper “core” training entails, ignoring the important role that the lats play in squatting and deadlifting, and wearing polo shirs with the collar popped up.  Jesus, I hate that.

If I do say so myself – and I totally am – both presentations are chock full of useful information that I hope many coaches and trainers listening can apply right away.  And, of course, both have a little Tony G flavor, so there may be a few references to Optimus Prime or even Harry Potter.  Just a fair warning…..

The pre-launch is slated for early August, so I’ll be sure to keep everyone posted.

2.  Interesting story: I went to the dermatologist on Friday and to make a long story short, I asked if there were any dietary factors that could come into play which would explain my skin flarring up.  Not surprisingly, she suggested that protein powder could come into play (artifical sweetners) – and to be honest, I trying to make a concerted effort to cut down on it anyways; but she also mentioned that I should tone down the protein powder AND creatine due to the fact that they both contribute to high cholesterol.

I bit my tongue, kept my mouth shut, and instead did what any person who hates confrontation would do:  mention it on my Twitter account that I felt her comment was borderline the dumbbest thing I have ever heard.  Here’s what my Tweet said:

New Rule: If you’re a doctor, and you tell me that taking creatine will increase my cholesterol, your license should be revoked!

I mean, really?  Do doctors STILL believe this non-sense?  Am I missing something?  Must be she didn’t get THIS memo.

Anyhoo, what was REALLY funny was that when I checked the following day, some OTHER doctor (who read my comment on Twitter) made this remark:

No, but it’ll put u into renal failure

Yep, that’s right, supplementing with creatine – the most researched supplement in human history – will put you into renal failure.  What’s more, I can only assume, this doctor must also believe that high(er) protein diets do the same.

This despite the fact that there’s NO research to back his claim up.  Sure, there’s evidence to suggest that creatine supplementation and high(er) protein diets aren’t wise for people who have a PRE-EXISTING renal condition (well, duh).  But there’s not one iota of evidence to suggest the same can be said for healthy individuals.  If you can find it, I’d love to see it.

It’s not surprising that you didn’t make out with girls.

This, after telling my girlfriend that not only was I in a bowling league back in high school, but I actually watched the PBA Tour on television.

5.  Here’s a fascinating book that I can’t recommend enough – The Psychopath Test by Jon Ronson. 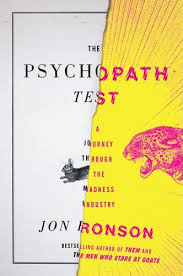 A psychopath is someone who shows no emotion or empathy towards other people.  Guess how many politicians and CEOs out there could clinically be considerd a pyschopath?  3-5%!  Holy s***!!!!!!!!

While not entirely about crooked politicians and scumbag CEOs, the author does shed some interesting light on just how batshit crazy some people are out there – including a VERY interesting story on the london train bombing from a few years ago.  Get the book, trust me.

On that note, time to pack my meals and head to work.  Enjoy the rest of the day everyone!

If you train people for a living, read this. Don’t Guarantee Results It’s seems counterintuitive, maybe even borderline asinine, not to guarantee your clients results, right? I mean, what the hell are they hiring you for? HINT: It’s not to trade baseball cards or tickle fights. I had a new client start with me recently… END_OF_DOCUMENT_TOKEN_TO_BE_REPLACED