Adapt, Darwin, I Ching. Whatever Man, We Gotta Roll With It

For those wondering what’s the deal with the funky blog title today, it’s a quote from one of my favorite (and arguably one the most underrated movies in the past ten years), Collateral.

In it, Tom Cruise’s character (Vincent) plays an assassin who “recruits” a random cabbie – Jamie Fox’s charcter (Max) – to drive him around for one night as he goes around LA killing people that he’s been contracted to do.

I won’t give away any details (other than Jamie’s character dies.  Just kidding), but one of the main themes throughout the movie is adapting to the situation.  Things aren’t always going to go as planned, and sometimes, you just have to learn to roll with the punches and go with plan B.

Similarily, yesterday I was having a conversation with one of our athletes – Cincinnati Reds pitching prospect, Tim Gustafson – and he mentioned how, when he was with the Atlanta Braves organization, John freaking Smoltz used to stop by and talk shop with a lot of the minor leagues and state that no matter who you are you’re never going to figure everything out, you’re never going to know everything, you’re never going to be perfect, and those who don’t learn how to adapt to the situation are generally the ones that don’t make it too far in professional sports.

Now, I never played professional baseball, but I held my own back in the day as a collegiate pitcher, and I can speak from personal experience that on some days had “it,” while on others, well, I sucked donkey balls.  And, it was on those days when I knew I didn’t have my best stuff that I had to adapt to the situation, and make the best of it.  Usually it panned out.  Sometimes, though, I’d throw an 0-2 curveball to the clean-up hitter and give up a three-run homerun that people are still saying hasn’t landed yet.  Shit happens.

Accordingly, I couldn’t help but notice that many of the same themes and concepts that Tim and I had discussed (as well as those in the movie) paralleled what we see in the strength and conditioning community as well.  Although I’ve touched on this topic in the past, I can’t help but be amazed when trainers and coaches never change their point of view on ANYTHING.

They’ve used the same system for a decade, using the same exercises, the same set/rep schemes, the same progressions, the same broken record without really taking into consideration that the industry is constantly evolving and changing.

With this in mind, I did a little experiment last night and went back and perused some older programs I wrote a few years ago.  I wanted to see how long it would take me before I felt the urge to throw up a little in my mouth.  Needless to say, it didn’t take long.

I noticed one instance where I programmed some kind of hip flexor stretching for EVERYONE – assuming, of course, that because most people sit all day, they ALL needed it.  95% of the time, this is true.  But tell that to the one person who may have anterior hip instability (or, snapping hip syndrome).  Nice one, Tony!

Now, I am in no way insinuating that there shouldn’t be some semblence of continuity in one’s programming.  But to say that a program should never evolve or change is a bit pigheaded, and is something that I feel is an EPIC fail on the part of many coaches and trainers who fail to see the big picture.

As an example, two years ago, we were all about sleeper stretches for most (if not all) of our baseball guys. 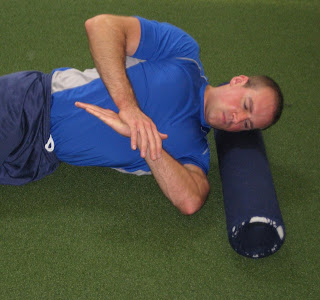 As such, you would have been hard pressed to see a program that didn’t include them to some capacity – whether it was part of their pre-work, used as a filler exercise, or done on their own at the end of their training session.

Fast forward to today, and we’ve almost done a complete 180.  After some experimentation, as well as insights from people like Mike Reinold, we concluded that we can use better alternatives to improve internal rotation (assuming that it’s actually needed) without actually cranking down on the shoulder itself.

Alternatives like the Side Lying Crossbody Stretch work appropriately:

But more importantly, working on one’s breathing patterns has a HUGE influence as well.  We can achieve upwards of 5-10 degrees MORE internal rotation without even touching the shoulder.

The point is, we tweaked our line of thinking – and as such, our programming – to reflect the fact that we’re constantly changing our approach and ALWAYS trying to improve.   Trust me, you’re not that big of a deal where this doesn’t apply to you.  If someone like Mike Boyle or Dan John can admit when they’re wrong and are ALWAYS evolving, you can too.

Have a nice weekend everyone.  Go Yankees!  Oh wait………..LOL!

Also, just a friendly reminder that Mike Robertson’s Complete Core Fitness is on sale through midnight tonight (10/7).  TODAY is the last day you can purchase it at the discounted price of $30 off.  Holla!

I’ve been a fan of “offset” loading for a number of years now. Without getting too deep in the weeds on what offset loading is and what the benefits are… …it’s when you either stagger your foot or hand position on certain exercises OR you load an exercise a certain way (how you hold a… END_OF_DOCUMENT_TOKEN_TO_BE_REPLACED

Last week I received an email from Jon Goodman. At first I thought he was going to extend an invite to me to come up to Toronto for a weekend of watching Jean Claude van Damme movies. But that wasn’t the case. Fingers crossed for next time. Nope, instead Jon was curious if I’d be… END_OF_DOCUMENT_TOKEN_TO_BE_REPLACED