1. Hope everyone had an awesome weekend (and remembered to turn their clocks back one hour before going to bed Saturday night).

Not surprisingly, like an idiot, I forgot to turn mine back and as a result got up earlier than I needed to do the weekly grocery shopping.  It wasn’t until I logged onto my computer to check emails really quick that I realized I was an hour early.  DOH!!!!

Nevertheless, once we were properly aligned with time, Lisa and I had the epitome of a “chill” day.  As is the case most Sundays, we use it to catch up on life, but also to do a little window shopping, too.  And by “window shopping” what I really mean is, “I follow Lisa around like an obedient puppy.”

At the start everything is rainbows and roses.  You want to walk into Marshall’s?  Sure, lets do it?!  Target?  Rock on.  I love me some Target!

By the time stores like Bebe or Sephora start entering the picture, I’m pretty much a walking zombie and have to fight off the urge to hurl my body in front of a moving bus.

Thankfully we were in a part of the city that not only had a Chipotle, but also had a movie theater nearby – so we decided to go see the new Denzel Washington flick, Flight.

Denzel will undoubtedly get a nomination for his role as a man who struggles with drug and alcohol abuse. Granted it’s a topic that Hollywood has seemingly squeezed dry time and time again, but if it’s any consolation, Lisa, a mental health therapist who has extensive experience working with people who suffer from substance abuse, was hit like a ton of bricks from Denzel’s extraordinary performance.

The last 10-15 minutes of the film were pretty powerful and left both of us speechless for a decent amount of time.  Later on last night, even as we were crushing filet mignon at a Morton’s, Lisa randomly said, “I’m still thinking of that movie.”

It was a good one people.

I know many will go into it thinking that the movie is about how Whip (Denzel’s character) lands the plane and h0w much of a miracle it was – and that’s not far from the truth.  But in reality, it’s a movie about a man’s inner demons and how he just can’t seem to get out of his own way.

2.  Just a friendly reminder:  I’m challenging everyone to a DEADLIFT BATTLE starting TODAY (Monday, Nov. 5th), and I’m hoping more will join in on the madness.

There will be daily giveaways as well as a randomly selected grand prize winner at the end of the week.  What’s more, and maybe even more pertinent, it gives you a perfectly good reason to deadlift your face off this week and earn some bragging rights.

Of course, it’s all in good fun, but I’m going to kick all your asses.

No, but seriously, my competitive juices are overflowing right now, and I can’t take responsibility for any hurtful words that come out of my mouth this week. Which is to say I’m pretty certain all of you were adopted. 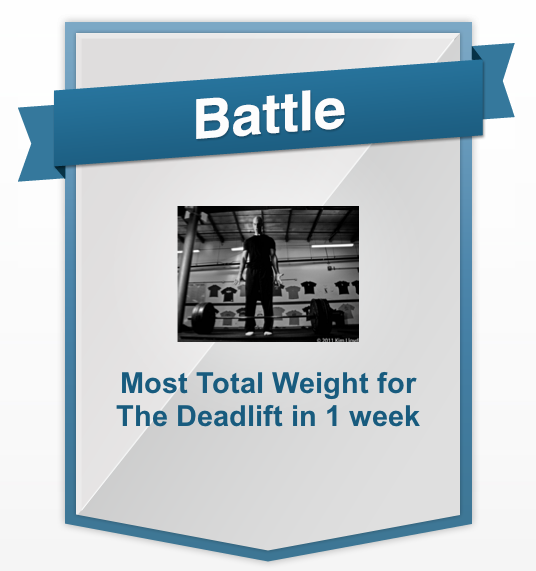 3. A lot people on this site are familiar with my friend, Sirena Bernal, who’s a fantastic personal trainer/pilates instructor/nutrition coach/overall kickass human being here in Boston.

Sirena and I have been chummy for the past year or so exchanging numerous emails, bumping into one another at the local Panera (where we both do a lot of writing and people watching), and she also came to one of my lectures earlier this year that I gave to a group of Boston based trainers.

In addition I’ve highlighted a handful of her articles in my Stuff You Should Read While Pretending to Work series – which I like to think is sort of a big deal for those who make it on.

Anyways, Sirena is a well of information and she’s really good at what she does.  So good in fact that she’s built a very successful online business that allows her the freedom to work where she wants, when she wants (hence what we always seem to bump into one another at Panera).

Currently, she’s in the process of putting together a FREE webinar titled Top 10 Weight Loss Foods to Get at Trader Joe’s, which for anyone who registers, will receive $50 off her next Lean Body Challenge in January along with a free TJ’s downloadable cookbook she’s putting together.

Even if you’re not located near a Trader Joe’s Sirena will be providing a bunch of useful information that could be applied to any grocery chain – plus, as I noted, you’ll get a hefty discount off her next challenge just for attending.  What’s not to like?

4.  My thoughts towards yoga have definitely skewed a little more towards the “it’s a tool in the toolbox” way of thinking in recent years.  In the past, if many recall, I’d adamantly be opposed to it because I often felt it was marketed in a way that made people think it was some sort of health and well-being panacea where everyone who did it would be magically have six pack abs, be able to jump over mack trucks, have clear skin, and shit diamonds.

I still think it’s marketed in a way that can be shady, but I also understand that there is a time a place for it – Heck, I even took a class and blogged about my experience HERE and HERE.

Anyways, one of my readers sent me THIS blog post which sorta feeds into the whole “yoga isn’t necessarily all it’s cracked up to be” mindset.

I think many of you will enjoy it.

PS:  I still need to write my review of the CP seminar from last weekend, and will hopefully get that up at some point this week.  Sorry!!!!!!!!

I’ve been a fan of “offset” loading for a number of years now. Without getting too deep in the weeds on what offset loading is and what the benefits are… …it’s when you either stagger your foot or hand position on certain exercises OR you load an exercise a certain way (how you hold a… END_OF_DOCUMENT_TOKEN_TO_BE_REPLACED

Last week I received an email from Jon Goodman. At first I thought he was going to extend an invite to me to come up to Toronto for a weekend of watching Jean Claude van Damme movies. But that wasn’t the case. Fingers crossed for next time. Nope, instead Jon was curious if I’d be… END_OF_DOCUMENT_TOKEN_TO_BE_REPLACED