The Post Where I Slap the Wrist of a Deadlift Troll

As it happens I don’t get a ton of hate mail or “troll” activity that’s directed my way.  Part of that is because I generally – not always – steer clear of controversial topics (CrossFit, intermittent fasting, Jacob vs. Edward) that somehow always gets people’s panties all up in a bunch.

On the other side of the coin, I like to think I go out of my way to provide top-notch content with a little lightheartedness that doesn’t come across as me being an uppity know-it-all snob.  And even if I do take a strong stance on something, I’m always willing to keep an open mind and respect other’s opinions on the matter.

That said, on the off-chance that I do get someone going out of their way to be a big meanie head and write me a scathing email or comment, I’ve learned to politely say “thank you,” or ignore them altogether and move on with my life. It’s just not worth getting into a war of words with some people.

It was a hard pill to swallow when I first started writing. I took any negative feedback I received as a direct blow against my character, and I’d be lying if I sat here and said that it didn’t sometimes affect my mood.  I wouldn’t cower in the corner in the fetal position sucking my thumb or anything, but there were times back in the day where I’d be thiiiiiiiiiiiiiis close to turning on a Julia Roberts’ movie and crushing a pint of Ben & Jerry’s.

When you think about it though, anytime you open yourself up to the masses and decide to write in an open forum, whether it be blogging, articles, or any form of media, you’re going to expose yourself to criticism.  It’s the nature of the beast, for better or worse.

Throughout the years I’ve learned to pick my battles.  Sometimes I deserved to be called out and I was always appreciative (although maybe not right at that moment) in the long-run, because part of why I’m in this industry and why I write is to learn and help people.  I’m not that much of a conceited person where I can’t say “my bad, I’m wrong” and move on.

And then you just have those people who have nothing better to do with their lives than to be a big, fat meanie-head.  Like I said, normally I ignore stuff like this and use it as a good laugh, but for some reason I felt this particular person, based off his holier than thou tone alone, deserved a little taste of his own medicine.

I think most of you reading will agree.

Here’s the email that was sent my way in its entirety – with a few words/lines highlighted on my end.

Why are you stating that an upper rounded back in a deadlift is incorrect. Please explain the shear you speak of.

So I guess Konstantin Konstantinov must be a shitty deadlifter eh? The fact is it depends on body composition and the weight being pulled.

It would be nice if you trainer, no back and no trap, types get your shit correct before you put this crap on the web.

So, essentially, what this guy was saying was that:

1. He read ONE blog post of mine (I don’t know which one) and decided that that encompassed my entire thought process on everything deadlifting. And….

2. Because he watched a Russian deadlift once, on the internet, that that somehow makes him an authority. And….

For starters, one blog post doesn’t define me and my thoughts.

Secondly, here’s a picture of some random dude juggling some chainsaws.  Man that is nifty!  I could probably do that!  In fact, I know I could do that because I saw it on the internet.

Thirdly, isn’t it funny how everyone somehow deadlifts over 500 lbs????  Uncanny.

Anyways, here was my initial response to him (with more to follow afterwards):

Well, if you actually read more of my stuff, you’ll understand that I’ve also said that when someone is lifting heavier loads it isn’t always going to be pretty.

And as a coach and trainer I’m certainly not going to teach someone to deadlift with a rounded back. It’s just not worth the risk. If or when they get to the level of Konstantinov then they’ll get a little more leeway..

Thanks for setting me straight, though, I really appreciate it.

I’m sorry.  I just couldn’t resist closing off my response with that last line.  Childish, I know – but sooooooooo worth it.

So lets break this down in a more conducive, less confrontational way.

His main beef with me was stressing how I’m not a fan of people deadlifting with a rounded upper back.  Specifically he asked if I could explain this whole “shear” phenomena, as if I was pulling a random word out of my ass.

Let me clarify a bit before I proceed.

For starters, as the co-owner of a gym (and as such: having the luxury of paying liability insurance), part of, if not the most crucial component of my job is to keep people from getting hurt.

Think about how much responsibility we accept when a parent drops off their 14 year old kid to train with us. How do you think it bodes for business if we have kids injuring themselves left and right because we don’t take the time to teach them how to lift correctly (but more on that in a bit)?

As someone on my Facebook page so succinctly noted, “it must be nice to Monday morning quarterback from a far. If they did have their butt on the line everytime an athlete picked up a bar, this junk would be the last thing you would be arguing about.”

More to the point, if we were to look at the biomechanics of the lumbar spine (or read anything Dr. Stuart McGill has written in the past 15+ years:  HERE and HERE would be a nice start), we’d understand that the spine can handle compressive loading fairly well (assuming it’s not loaded and someone is living flexion), but it’s shear loading that many fail to pay attention to.

When the (lumbar) spinal muscles – namely the erector spinae, longissimus, iliocostalis, etc – are doing their job when lifting heavy things off the floor, they’re mainly counteracting perpendicular forces to the axis of the spine which attempt to slide the components away from their normal axis.

As my boy Dean Somerset noted,  “McGill showed elite powerlifters could get their spines to within a few degrees of full flexion and maintain that position through the pull, whereas amateurs or intermediates would go beyond full flexion without control and wind up exposing their discs to stupid forces and injury, so teaching a rounded back to a beginner is completely different than allowing an experienced puller to creep into flexion during their max lifts.

It also doesn’t talk about how when the experienced lifters are training with less than max weight they get closer to neutral and work on maintaining and grooving that pattern while staying away from flexion.”

For the visual learners out there, it goes a little something like this: 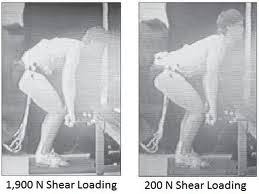 Now, to be fair: guys like Konstantin Konstantinov have a TON more leeway because he’s trained his body to stay out of danger when the shit hits the fan. He’s the elite of the elite. Using him as an argument as to why lifting with a rounded back is advantageous is borderline the dumbest thing I’ve ever heard. Excuse me while I go throw myself in front of a mack truck.

Moreover, it’s important to note that as a coach I’m ALWAYS going refrain from teaching the deadlift with a rounded back because it’s just common sense.  It’s important to engrain the proper motor pattern, and CEMENT that pattern with smart, properly progressed strength training so that if or when they do start lifting heavier loads, they’ll be better prepared to not crumble like a deck of cards.

That and so their max pulls don’t end up looking like this walking ball of fail:

So that’s my more “polite” response. Agree?  Disagree?  Want to give me an internet high-five?  Please share below.

Being human means being enamored by a litany of things in the health/wellness/physical preparation realm. Some people are easily swooned by fancy watches and elaborate looking exercises Others by cryochambers and Paleo recipes that taste like sawdust. I am not here to play judgement police. For the most part, everything has a time and place… END_OF_DOCUMENT_TOKEN_TO_BE_REPLACED

Back tweaks are an inevitability. They happen to people who lifts weights regularly, and those who just look at weights. They happen when doing something as inane as bending over to tie your shoes, as well as when you’re doing some less inane, like, fighting crime at night. They happen on a Wednesday. There’s no… END_OF_DOCUMENT_TOKEN_TO_BE_REPLACED