Deadbugs: The What, Why, and How

I know what some of you may be thinking:  “Really, Tony, a post on deadbugs?  What’s next….telling us how much you love Twilight or that you’re adopting another cat?  You haven’t gone soft on us now have you?”

<—– LOL, get it??  I actually put a picture of a “dead bug” here, when I’m actually just referring to the exercise.  High five!

Full confession time.  Okay, I admit it: back in 2008 I read the first Twilight book.  But only because I wanted to see what all the hoopla was about and see for myself why so many people were going bat shit crazy over it.

Well that, and it was a dark period in my life. I was single at the time and was going through some existential phase where I was trying to figure out what everything means.  Vampires wasn’t the answer.

I read it, didn’t care for it, and moved on with my life.

With regards to deadbugs, however, in many ways I feel they get a bad rap and that they’re one of the more UNDERrated core exercises out there.  Perhaps a more apropos way to explain things would be that deadbugs are almost universally seen as a “sissy” exercise and a waste of time by many trainees, meatheads, and athletes alike.

I was recently asked by MensHealth.com to provide a “hot list” of some of my favorite go to core exercise that I either use with my athletes and clients, or that I pepper into my own training as well.

While I offered the prerequisite favs like Pallof press variations, stir-the-pot, and carry variations, I 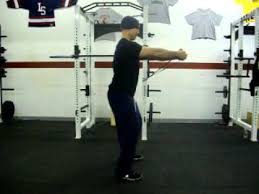 1.  I didn’t want the incessant eye rolling pointed in my direction.

2.  Despite their perceived “easiness,” deadbugs are actually an exercise that are absolutely butchered by, well, everybody.

3.  As such, I took the greedy way out, held back, and decided to keep deadbugs to myself and dedicate an entire post on them in an effort to persuade everyone reading that they’re the bees knees (and that they should take the time to pay a little more attention to detail).

Getting the obvious out of the way:  deadbugs are an exercise that, for all intents and purposes, help with motor control and can be seen as a “baseline” exercise to ascertain whether or not someone has any glowing imbalances that need to be addressed.

While it’s fairly common in the athletic realm, more and more we’re seeing people in the meathead/weekend warrior or what I like to call the “I like to lift heavy things category” present with an overextended posture or anterior pelvic tilt.

While this isn’t necessary anything to write home about – there IS a “range” of acceptable anterior pelvic tilt – it does become problematic when it’s excessive and otherwise leads to other imbalances up and down the kinetic chain.

For starters, those in excessive anterior pelvic tilt will almost always have extension based back pain – where the facet joints, posterior discs, etc are placed in an ungodly amount of stress which can manifest into more profound issues like spondylosis (end plate fracture) down the road.

Mike Robertson has a cool term for this called Flawed Active Stability – whereupon you’re cueing the body to engage the paraspinals and spinal erectors, effectively crushing the spine, in an effort to gain stability.

What’s more, in general, because of the misalignment associated with APT, it’s not uncommon for people to experience chronic pulled hamstrings, anterior knee pain, hip pain, and a myriad of other issues.

All of this to say: it just plain sucks donkey balls and can really mess with one’s training in the long run if not addressed or at least kept under wraps.

Deadbugs are a fantastic way to teach the body to “encourage” more posterior pelvic tilt while simultaneously enhancing motor control and to engage the lumbo-pelvic-hip stabilizers to do their job.

As note above, most people flat out do a piss poor job when it comes to performing deadbugs correctly.  Here’s a great example.

Upon first glance those don’t look too shabby, right?  Offhand those look pretty good.  But with a closer look we can definitely comb through some common technique flaws that many should be able to appreciate.

1.  Before anyone makes fun of me for tucking my t-shirt into my sweatpants, just know that I did it for a reason. Which was to show how most people perform their deadbugs:  with an excessive arch in their lower back and with their rib cage flared out.

Well that and we had people visiting the facility from Australia yesterday and I didn’t want to make things awkward by walking around with my shirt off.

Admittedly, it’s still hard to see in the video above, but if you were in the video with me (oh, hey, hello!) you would easily be able to fit your hand in between the floor and my lumbar spine.  This shouldn’t happen and essentially defeats the purpose of the entire exercise.

And this is why I tend to lean more towards deadbugs from the get go – rather than birddogs – because the floor provides more stability and kinesthetic feedback to the body.

2. Another mistake is that people tend to rush this exercise.  Many will just haphazardly flail their arms and legs around hightailing it through the set.  While we could make a case that extending the arms and legs may be too much of a progression and we need to REGRESS the exercise – read THIS for more ideas – much of the time it just comes down to slowing people down.

All that said, lets take a look at what PROPER deadbug should look like.

I know it doesn’t look much different than the first video, but I assure you there’s a lot to consider.

2.  My lower back is flush against the floor – and I’m encouraging more posterior pelvic tilt.

3.  Moreover I’m also taking a massive breath and inhaling THROUGH MY NOSE to focus more on a 360 degree expansion into my torso.  In other words:  I’m not just breathing into my stomach, but also trying to expand sideways and INTO the floor as well as my ribcage (but without allowing it to flare out too much).

4.  From there I lower contralateral limbs – controlled, in an effort to resist extension – while FORCEFULLY exhaling my air through my mouth.  I do this until ALL my air is out.

By doing this a few things happen (and I apologize in advance for all the enumerations in this post):

2. The diaphragm is better engaged.

3.  Many don’t think of this part, but with all my air exhaled out, I now have nothing to help stabilize my spine except the muscles themselves.

It’s not uncommon for people to literally start shaking as they proceed with their set. This is okay – so long as you maintain proper spinal position – as it just demonstrates that the muscles in the surrounding area are now doing their job more efficiently.

I’ll typically shoot for 2-3 sets of 5-8 repetitions PER SIDE.

And there you have it.  It’s nothing flashy or Earth shattering, but I guarantee that if you go a head and try to perform your deadbugs in this fashion you’ll notice how much MORE challenging they can be, and they’re anything but a sissy exercise.

Give it a try and let me know what you think.

Fair warning: This will not be an all-encompassing post on how to train the shoulders or how to program around nagging shoulder injuries. Frankly, I don’t think anyone wants to read a Dostoyevsky length diatribe on shoulder impingement or how improving scapular upward rotation leaves me sexually aroused. Yep, I’m weird. Instead I want to give… END_OF_DOCUMENT_TOKEN_TO_BE_REPLACED