Something I Never Thought I’d Call Myself…..

Bahahaha! Just kidding. Actually the word I’m looking for is “foodie.” I never thought I’d refer to myself as a foodie. 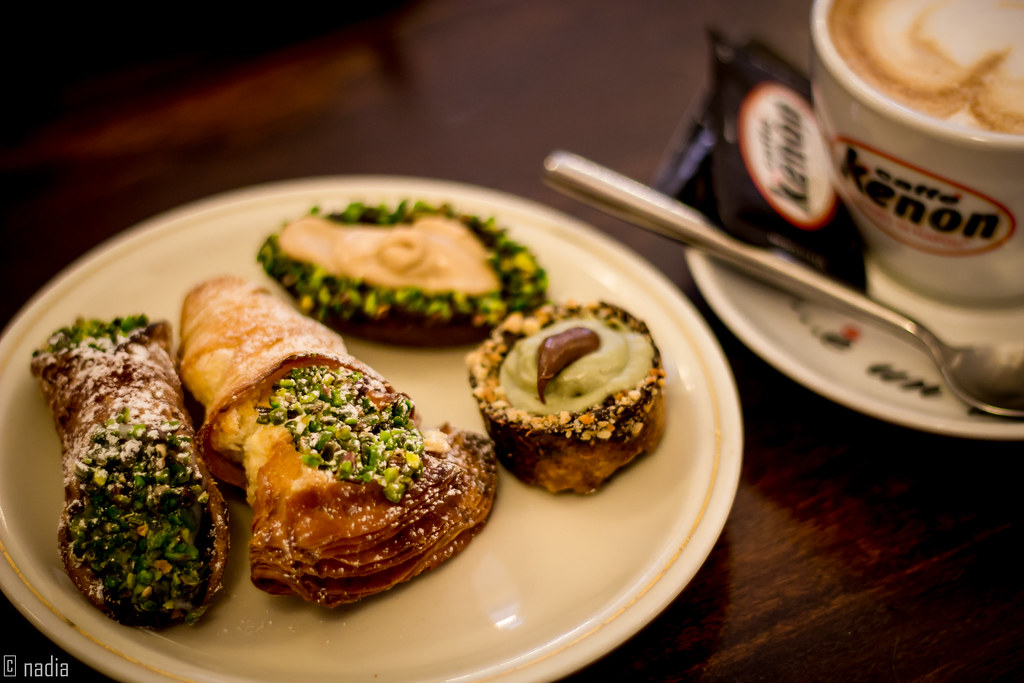 Or, as Urban Dictionary eloquently refers to it, “a douchebag who likes food.”

In that case I’ll raise my hand and offer myself to judgement and possible ridicule:

“My name is Tony Gentilcore, and I’m a douchebag who likes food. A lot.”

In my own defense I’m not one of those uppity bourgeois a-holes who nitpicks over fork placement on the table and pretends to like caviar1.

Liking pizza? Sure, I get it. What’s there not to like? Liking some fancy schmancy entree such as sauteed pig rectum? Shut up. Just, shut up.

Nor am I one of those people who refers to an entree as “delish” or stresses that such and such is “to die for.”

NOTE: in this instance “to die for” is said while flicking one’s wrist and the word “die” is accentuated with an exaggerated English drawl. Bonus points if you happen to be of royal descent or hunt foxes in your free time.

Lisa and I go out almost every Saturday night as part of our “date night” ritual. And given we live in a pretty baller city – Boston – we have the luxury of endless restaurant options.

As it happens, the most current season of Bravo’s Top Chef was filmed in Boston. And one of mine and Lisa’s favorite restaurants – The Regal Beagle, located in our own neighborhood in Coolidge Corner –  was featured because their executive chef, Stacy Cogswell, was/is a contestant on the show!

So yeah, we’re fortunate to live in such an amazing city.

I wasn’t always a foodie, though.

There was a time in my life, back when I lived in my native central New York (hometown: Groton), when going out to eat was an event reserved for “special occasions.” You know, things like birthday parties, rehearsal dinners, Syracuse Orange basketball games, leap years, or sometimes on the off-chance when someone of the opposite sex agreed to be seen with me in public.

In addition there was also a time in my life when “fine dining” meant T.G.I Fridays, Applebees, or Olive Garden.

Two for one appetizers goes a long way when trying to woo a girl. And don’t even get me started on unlimited bread sticks! BOM CHICKA BOM BOM.

I know this comes across as me insinuating said establishments are somehow lame or lowbrow…but that couldn’t be further from the truth! 1) I still frequent those places. And 2) Who can resist unlimited bread sticks?

It’s just that when you live in a more metropolitan area and have more options to choose from, you learn to have a better appreciation for what really good food (and service) should be like.

And it’s with that I’d like to have a little fun (seriously people: don’t take all of this, well, seriously), breakdown some of my “criteria” for what separates good restaurants from excellent restaurants, and discuss some of my pet peeves when it comes to dining out.

Lisa enjoying a martini prior to dinner at Blue Water Cafe located in Vancouver.

Listen, I’m not saying that whenever I walk through the front doors of a restaurant the hostess has to greet me as if I’m General Zod.

Would it hurt from time to time? Hell no!

But all else being equal I realize I’m not the center of the universe, and I don’t expect to be treated like an A-list celebrity. And, honestly, I always feel awkward when a place goes above and beyond and gives the royal treatment. I can chew my own food, thank you very much….;o)

That said, nothing sets off the “red flags” more than when you’re ignored when you walk in and/or you have to wait more than fifteen  minutes when you have a reservation.

It’s not the end of the world, of course……but it doesn’t set a nice precedent.

Listen, if I’m going to pay upwards of $30-$50 for an entree, you better sure as shit serve some bread beforehand! When I know we’re going out to a big dinner I almost always refrain from eating a lot of food that day because I know I’m going to go to town once I sit down at the table.

As a result I almost always show up hangry (angry because I’m hungry and ready to swallow my hand).

Not only is it important to serve bread, but it should be good bread. None of this hard, day old, white BS that some places serve.

Outside of that, if you’re charging people $30-$50 per entree, act like you’ve been there and serve some whole grain bread for crying out loud!

Sorry, but if your bathrooms are a nightmare that even an Orc wouldn’t drop a deuce in it, it only makes me wonder what the hell is going on back in the kitchen.

This is probably my biggest pet peeve and will guarantee that I’ll never go back to eat at a certain place if they try to pull this off.

Being a fitness couple, Lisa and I, to some degree, still try to eat “healthy” when we go out to eat. We’re not Paleo Nazis by any stretch, and we don’t hyperventilate into a brown paper bag at the mention of gluten, but we’ll try to tone it down to a certain degree when eating out.

I.e., instead of the mashed potatoes swimming in butter and cheese we’ll opt for something green; like kale, Brussels sprouts, or broccoli.

We made reservations at a place near our apartment not too long ago that, when the time came to order, said they couldn’t make any substitutions when it came to our meal.

5. We Only Cook It This Way

This same place, when I ordered my steak ‘medium,’ went on to say that the chef wouldn’t cook it anywhere above ‘medium rare.’

And, I forgot:  Am I eating at a local neighborhood tavern that serves sup-par food or at Smith & Wollensky Wannabe Snobby McSnobbypants Emporium?

I’m not opposed to deferring to the chef’s judgement on how certain food should be prepared – especially with regard to bringing out it’s full flavor. But come on….steak?

You’re going to play that card with steak?

I always laugh at this one.

I’m a meathead. I lift heavy things and I like to eat a lot of food. It shouldn’t come as a surprise, then, that when I go out to eat it’s not uncommon for me to order meals which are designed with the intent to serve two. Or maybe I’ll DOUBLE certain orders.

For instance: if we go out to brunch I’ll often order a double omelet. 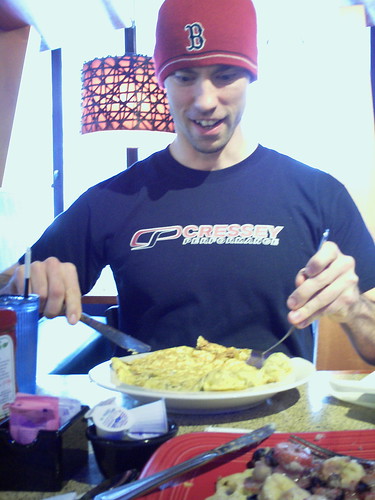 I’d wager a guess that 75% of the time the waitress or waiter will give me “the look,” as if to say “yeah right, like you’ll be able eat that much food!”

Then they’ll politely say something to the effect of: “Are you sure? That’s a lot of food.”

To which I’ll say, “yeah, you’re right. Better make that a triple order.” It’s almost as if they’re challenging me. And if that is indeed the case: BRING IT!!!

It’s funny though. Most won’t say a word to the people who order a large pizza on their own or order the stack of pancakes that would rival the peak of Mordor (<— That’s TWO LoTR references in this post, bitches) with peanut butter chips, M&Ms, and whipped cream.

No one blinks an eye.

Order a 6-10 egg omelet, however, and everyone becomes a cholesterol expert and thinks you have a death wish.

I ate at a place once where, after ordering a double omelet, the waitress brought out a t-shirt from the chef as a pseudo trophy. Apparently he had never been asked to make such a large omelet before.

Who knows: maybe one day I’ll eat a place where I’ll win a jacket, a PS4, or a new car!

Like I said before this post was written in jest. I understand that some of the things I’m “complaining” about are minute and borderline trivial. But in this day and age, with the advent of social media and pretty everything being placed underneath a social microscope, it’s the finer details which often separate the good from the bad.

So, what about you? Do you have any dining pet peeves? Keep it light people……;o)

Being human means being enamored by a litany of things in the health/wellness/physical preparation realm. Some people are easily swooned by fancy watches and elaborate looking exercises Others by cryochambers and Paleo recipes that taste like sawdust. I am not here to play judgement police. For the most part, everything has a time and place… END_OF_DOCUMENT_TOKEN_TO_BE_REPLACED

Back tweaks are an inevitability. They happen to people who lifts weights regularly, and those who just look at weights. They happen when doing something as inane as bending over to tie your shoes, as well as when you’re doing some less inane, like, fighting crime at night. They happen on a Wednesday. There’s no… END_OF_DOCUMENT_TOKEN_TO_BE_REPLACED