The Most Underrated Exercise in Strength and Conditioning? It’s Not Deadlifts.

While I can’t say it’s always been the case (I’ve grown less dogmatic and immature as a coach the older I’ve gotten1, I operate under the guise that every exercise has its time and place.

Except for maybe this one. 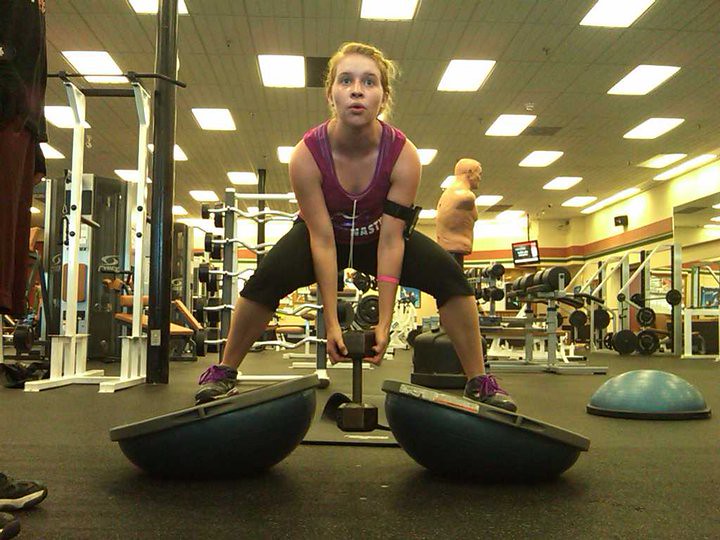 If she were juggling a pair of chainsaws while standing on the BOSU balls I could see myself giving a nod of approval.

I used to scoff at any coach or trainer who had the audacity to have his or her client leg press instead of squat.

Roll my eyes whenever I saw leg extensions or leg curls programmed.

And don’t even get me started on the Smith Machine.

I was a gym snob through and through. Borderline douchey. I still am to a small degree. But I’ve toned it down considerably as the years have passed.

I mean, for what it’s worth: I’ve actually been including more low intensity aerobic training in my own training (and that of my athletes), which is something I would have punched myself in the face for in the not so distant past.

I’d like to think of it as a form of evolvement on my end. More to the point, I’m not so singular in my train of thought on any given topic2 In short: I’m more open and less of a dick.

In fact, my thoughts on the topic mirror that of Bret Contreras (in THIS post):

“If there’s one movement that I absolutely loathe, it’s the “movement” that attempts to convince readers to avoid certain exercises altogether.”

Flipping the script, though, rather than waxing poetic on exercises not to do, today I wanted to instead discuss an exercise I feel is vastly underrated and underutilized.

Dare I say…most people reading should make it a point of doing it more often.

This is an exercise I’ve been using for years at Cressey Sports Performance and have always understood its benefits. I’ve used it with many beginner and intermediate lifters, and for those who feel they’re above this exercise and think they’re “too elite,” I’d defer to strength coach, Joe Kenn, who uses it exclusively with many of his NFL athletes too.

Side Note: I’d encourage you to listen to his interview on Mike Robertson’s Physical Preparation Podcast HERE.

Why I Heart This Exercise

1. I’m not an anti-back squat guy. We incorporate it – and it’s many iterations – at CSP often. I do feel there’s a cost-benefit to the exercise and that it has to be paired well to the athlete/person given their injury history, training experience, and overall goals.

Having said that, the Anterior Loaded KB Front Squat (from now on referred to as ALKBFS because I’m lazy and don’t want to type it out every time) lends itself to be a much more “back friendly” variation that most anyone can do on day #1.

The fact the load is more anterior (and not directly over the spine) seems an obvious advantage.

2. The ALKBFS elicits an almost unparalleled “core” challenge. Because the load is more anterior, one must fight like crazy not to tip over.

I.e., this is an excellent drill to help teach/coach people to maintain t-spine extension. You’ll still want to encourage a flexion moment, but because this variation encourages more extension it allows people to stay more upright.

It won’t take much to humble even the strongest back squatter. I’ve seen numerous trainees (both male and female) second guess their weight selection.

3. Moreover, for those with upper body imbalances or mobility issues – which may make back squatting difficult – the ALKBFS is great option. If someone doesn’t have the requisite shoulder abduction/external rotation ROM it doesn’t make much sense to slam a square peg into a round hole.

Of course we can utilize a Safety Squat bar, a giant cambered bar, or even have them perform a traditional barbell front squat, which makes the aforementioned imbalance moot. However, I encourage you not to disregard this movement just to be a contrarian.

4. Another reason why I like the ALKBFS so much is that it can transform or melt itself into more of a “hybrid” exercise if one so chooses.

The possibilities are endless.

You could even perform them offset style:

Give them a try today and let me know what you think.

Fair warning: This will not be an all-encompassing post on how to train the shoulders or how to program around nagging shoulder injuries. Frankly, I don’t think anyone wants to read a Dostoyevsky length diatribe on shoulder impingement or how improving scapular upward rotation leaves me sexually aroused. Yep, I’m weird. Instead I want to give… END_OF_DOCUMENT_TOKEN_TO_BE_REPLACED