Exercises You Should Be Doing: Deadstop DB Row

Without blinking an eye, I’ll be the first to admit that my favorite body-part to train is the upper back.  For me at least, when I see someone with a thick or defined upper back, I know (s)he has put her work in at the gym.  Comparatively speaking, there are a lot more people walking around with six packs than there are those with an impressive upper back.

I mean, what looks more impressive, this (AKA: the walking bag of douche who will inevitably make this his Facebook profile picture)

Or this (Oleksandr Kutcher’s upper back) 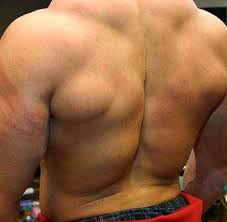 Not even close if you ask me.

To no fault of their own, though, most trainees like to train what they can see, and the back often gets the shaft in favor of things like the pecs, abs, and biceps; or, the mirror muscles.

That said, while things like deadlifts, barbell rows, and chin-up variations are undoubtedly the “go to” movements for sculpting a powerful upper back, one of the more underrated, or less utilized exercises out there is the dumbbell row.

As a matter of fact, I’d argue that the dumbbell row is one of the more underrated upper back exercise, since not only does it help build a thick upper back, but it’s also a great movement for the lats as well.

Unlike the aforementioned exercises listed above, dumbbell rows are a single limb movement, which carries its own advantages in the sense that it’s easier to ascertain whether or not there’s a strength imbalance or weakness between the left and right side.  Too, due to the lack of equipment needed (all you need is a single DB), anyone can do them at any time.

First things first, however, as simple as the dumbbell row might appear, it’s surprising how much this movement is actually butchered.  Simply put, what most trainees feel is a dumbbell row is anything but, and is often nothing more than a test to see how long before my eyes starting hurting.

Before we get to the actual exercise, here are some common technique flaws that I tend to come across.

Here, there’s really no emphasis what-so-ever on the upper back itself.  Instead, the movement resembles some sort of explosive arm curl with momentum taking over.  Worse still are those guys who do this and grunt as if they’re giving birth to a bowling ball on every rep.  LOOK AT ME, LOOK AT ME, LOOK AT ME!!!

This one is quite common, where you’ll see someone performing a “row,” only to completely rotate their upper torso because they’re using too much weight to do it correctly.  Ideally, the torso should stay completely stationary, with the chest/nipple line pointing towards the bench the entire time.

The I’m Completely Using the Worst Form Ever Guy:

This one should look familiar to anyone who trains at a commercial gym – rounded back, head protruding forward, absolutely no scapular retraction (adduction) taking place.  I cringe everytime I see this.

Which takes us to today’s exercise of the day

Who Did I Steal It From:  strength coach, and fellow t-nation.com contributor Tim Henriques

What Does It Do:  As noted above, this is a fantastic exercise to build a thick upper back (big biceps, too, since they’re in the direct line of pull), but also targets the lats as well in addition to providing a nice stretch in that area to boot.

Key Coaching Cues:  While maintaining a neutral spine position throughout (the body should make a straight line from the head to lumbar spine), start with the dumbbell resting on the floor.  Grab the handle and crush it – gripping it as hard as you can.  Doing so will single the rotator cuff to fire and to pack the shoulder back through a process called irradiation.

From there, I like to tell people to pretend they’re starting a lawn mower – rowing the dumbbell by bring their elbow towards the hip (not just going straight up and down).  Effectively, you’ll be “pulling through the elbow,” finishing at the top by retracting (technicaly, adducting) your shoulder blade towards the midline of the body.  In other words, squeeze your shoulder blade like a mofo at the top.

To finish, you’ll return the dumbbell back to the floor, coming to a complete STOP.  Pause for a second or two, and repeat for desired number or repetitions.

Of Note:  for those with shorter arms, you may want to grab a stepper or a few mats to place on the floor to decrease the range of motion.

And there you have it.  Try it out today and let me know what you think!  Also, just a friendly reminder, if you found this post useful, be sure to click the “Like ” button located at the bottom.  I’ll be your best friend forever if you do.

Fair warning: This will not be an all-encompassing post on how to train the shoulders or how to program around nagging shoulder injuries. Frankly, I don’t think anyone wants to read a Dostoyevsky length diatribe on shoulder impingement or how improving scapular upward rotation leaves me sexually aroused. Yep, I’m weird. Instead I want to give… END_OF_DOCUMENT_TOKEN_TO_BE_REPLACED