A Rant on Chicken Leg Syndrome

Note:  I got this question via email the other day, and once I started writing my response, it got so long that I just figured I’d use it as a blog post.  Take it for what you will – if anything, I was just writing off the top of my head, so feel free to chime in below.

Q:  This is a totally random question but one that (a) I wouldn’t mind seeing you tackle in your blog at some point and (b) has been on my mind for quite a while now.

Here goes: Why don’t we see more emphasis on great (not necessarily big, but defined) legs instead of JUST big arms and a hyooge chest? I’m all for the latter (to a point), but I find it rather odd that so many guys have guns and pecs but their legs are toothpicks. We always talk about single-leg training, squats and deads, but in my gym and everywhere else, I see no guys sans bodybuilders focusing on their wheels.

This has always been an issue for me because a great pair of wheels on a guy ALWAYS yields attention.

It’s true even of many trainers. I remember commenting to my wife that a trainer she once hired had “no legs.” She responded, “He has a nice upper body.” Then, when he finally showed up in shorts, she said “I wanted to throw up at seeing his chicken legs.”

Just a little rant, but each time I’m lunging with 110s or deadlifting 8 plates, a few of the guys with the best upper bodies always comment that they wish they had my legs and/or leg strength. I always think, “You could, if you stopped benching three days a week.”

Just wondering if there was some memo I missed.

A:  Well, I’ll be the first to admit that I have the worst calf genetics known to man, so this may come across as the teapot calling the kettle black, but I’ll bite.  I mean, I’ve pulled close to 3x my bodyweight off the ground, so that gives me some street cred.

I’m very similar to you in that I can look at a dude’s physique (no homo), and tell if he’s put his work in.  For instance, if I look at a guy and see a thick, wide back, he’s obviously put his time in.  I mean, any tool wearing a fanny pack and a cut-off shirt can have biceps and abs.  However, not every guy is walking around with a back that looks like the Grand Canyon. 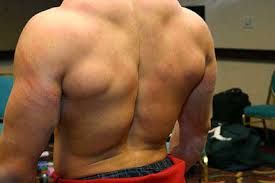 Similarly, we can think along the same lines with the lower body.  Now, speaking from a personal standpoint, I have one goal and one goal only in life:  and that’s to have a big ass.

So big in fact, that when I walk past J-Lo, all she can say is “damn!”

Nonetheless, I’m a bit skewed in my perspective since I see guys walking around with tree trunks all the time at CP; but I can definitely see your point when referring to the typical commercial gym scenario where a “leg day” usually entails some quarter squats in the Smith machine, a few leg extensions and curls here and there, and, of course, some leg presses for good measure – sometimes while reading the newspaper.  Believe it or not, I once saw a gentleman doing that at a gym I used to work at.  Unbelievable.

I think in the end, it comes down to a few factors:

1.  Guys like training what they can see.  Until the day comes where it’s socially accepted to walk around with our pants off (fingers crossed), most dudes are going to hit the push-ups and curls before they go clubbing.  That’s just the way it is, and the it’s always going to be.

2. Training upper body is easier than training lower body.  It’s akin to asking someone whether they’d rather go for a two mile “jog,” or go to the local track and do a few rounds of 400M tempo runs or sprints.  The less masochistic in the crowd will more often than not pick the former over the latter.  Similarly, what sounds more appetizing to Joe Inflated Lat Syndrome:  front squats or concentration curls?

3.  Training the upper body, at least in my humble opinion, lends itself to be a little more “volume friendly.”  In other words, 70% of our muscle mass is below the waist line (I’ll refrain from using an obvious joke here).  We have the glute max, hamstring group, adductor group, and obviously our thigh muscles, too (rectus femoris, etc).  These are big freaking muscles – and when we train them (hard) it takes them a little longer to fully recover.  Anyone who’s ever done a set of breathing squats for 20 reps or broken a deadlift PR can attest that you essentially feel like you got hit by a Mack truck for the next three days afterwards.

Tricep kickbacks?  Not so much.

On the flip side, however, our pecs (as bulletproof as they are), are a relatively small muscle (comparatively speaking) and can be trained a bit more frequently, and can handle a bit more volume.  In much the same light, we can say the same for our triceps, deltards, abs, you name it.  Training our upper body generally isn’t quite a taxing on the body (especially from a CNS standpoint) as the lower body.  This isn’t to say that training upper body is always a cake walk, but lets be honest, chest flies aren’t nearly as “vomit in my mouthish” as say, barbell bulgarian split squats.

As such, most (not all) guys will automatically gravitate towards training their upper body more.  Heck, just look at most body building splits:

Mon:  Chest and Back

Wed: Legs (again, this can vary between being a raging vagina (leg extensions) or actually putting some effort in – deadlifts, squats to actual depth, single leg work, GHRs, Prowler, etc).

By that token, dudes are hitting their upper body four times per week, and their lower, once.  Giving credit where credit is due, as I alluded to above, if you train your legs right, sometimes once a week is plenty.  But, given the likelihood that most guys (again, not all) have no idea what it’s like to use a squat rack for its intended purpose, this is a non-issue.

Anyways, to make a long rant short, I feel your pain.  I think if more dudes spent more time training their lower body, they’d see marked improvements in their overall physique.  But until the day comes where girls compliment a guy’s quad sweep as much as his biceps (or all these same guys actually start training in a “real” gym), it probably isn’t going to happen anytime soon.

I’d love to hear everyone else’s thoughts on this.

I received a question recently via my Instagram DM’s and figured it prudent to take some time to write a more thorough response I could share with the masses here. 1. I hope it helps and makes sense. 2. Um, why aren’t you following me on IG? Here’s the question: “What is your response to… END_OF_DOCUMENT_TOKEN_TO_BE_REPLACED

Fitness professionals are notorious for myriad of things: Wearing sweatpants to work everyday. It’s definitely one of the perks of the job. Always forgetting about the protein shake shaker in their gym bag (or in their car) that invariably, three weeks later, ends up melting someone’s face off once it’s opened. Their affinity for smedium… END_OF_DOCUMENT_TOKEN_TO_BE_REPLACED