My Case Against the Leg Press My Case Against the Leg Press

Without much hesitation, I’d argue that there isn’t any one exercise in the fitness community that’s more hotly debated than the leg press.  On one side of the fence, you have those who are interested soley in aesthetics and really only care about gaining citizenship to Quadszillaville, USA.  And that’s cool….I get it.  More power to you.  I’d be remiss if I didn’t recognize that the leg press IS an excellent choice if your main goal is hypertrophy and building legs the size of Kansas.

Too, and just as little aside, there’s also “some” efficacy for utilizing the leg press for those in a rehabilitation setting.  For instance, it’s not uncommon for physical therapists to program leg presses for those post-surgery in order to regain motor control and/or strength in the quadriceps in a more controlled setting.

So before I continue on, let it be known that I, Tony Gentilcore, do solemnly swear that there IS a time and place to implement the leg press into someone’s program.  There, I said it……..happy?

Having said that, if we were to jump over to the other side of the fence – the side where yours truely hangs out – we’d find that there many people who deem the leg press as nothing more than an oversized coat rack.

Again, just to reiterate, I do recognize that there are extenuating circumstances where implementing the leg press is warranted and worthwhile.  It’s just that as a strength coach, and as someone who’s main objective is to help athletes perform better at his or her’s chosen sport, or help regular Joe’s and Jane’s not move like poop, I feel that those circumstances are few and far between.

Yes, I do realize that I’m lending myself up to public criticism for even bringing this topic up, and that’s okay.  Invariably there’s going to be an internet warrior or two who’s going to chime in and tell me how much I suck at life and otherwise go off on some tangent about how I don’t know what I’m talking about – all from the comfy confines of his their parent’s basement.   LOL – zing!!!

This is just MY opinion, and believe me, I’m not that much of a pompous ass to think I’m 100% correct in my line of thinking.  Just maybe more along the lines of 97%.

Okay, enough of the jibber-jabber.  Lets get it on!

Reason 1 (Because I Said So)

There aren’t many sports (or real life events for that matter) which ask for an individual to step into a contraption, slap 400 lbs on, sit down, and proceed to push said 400 lbs up and down an incline at 45 degrees using what mounts to a eight inch range of motion.

I have no idea why the woman in the video above is wearing an ankle weight, but regardless, this disaster only solidifies why I haven’t included the leg press in any of my client’s programming in like F.O.R.E.V.E.R.  If there ever was a case where leg presses give people a false sense of “strength” then this is it.

But before I go on, I know what some of you may be thinking:  “Well there aren’t many sports or real lift events that require us to stand in a power rack, place a (loaded) barbell on our back and squat it, either.  What’s up with that, huh, Mr. Smartypants?  Are you telling me squats are more functional than leg pressing?”

Valid point.  I’m picking up what you’re putting down.

Well, not really.  I think the phrase “functional training” has gotten so convoluted and watered-down within the past few years, that no one even knows what the heck it means anymore.  Going back to the point above, leg pressing “could” be considered functional in the context of people who are undergoing rehab.  Certainly though, at least in my eyes, leg pressing, when dealing with HEALTHY individuals, IS NOT functional.

I can’t think of any instance where anyone will need to acquire the ability to push a load up an incline.  Squatting, on the other hand, is a basic human movement pattern that everyone needs to be able to do on an almost daily basis.  Does it necessarily have to be loaded?  No.  But it DOES need to be done. 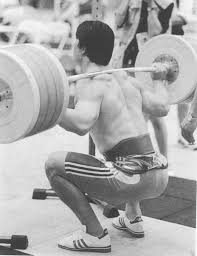 Which brings us to my point.

You see, the reason why pretty much everyone can use more weight on the leg press as opposed to squats is because the machine itself provides all the external stability – there’s no inherent challenge to the body to stabilize anything.  You just load and go.

Conversely, with squats, the body itself has to provide the INTERNAL stability to perform the movement correctly so as not to tip over, fall on your face, get stapled by the bar, etc.  Here, pretty much every muscle in the body is engaging and playing a role in the movement.  Everything from the small, intrinsic muscles at the bottom of our feet to everything up the kinetic chain (glutes, hammies, quads, erectors, core, upper back, you name it) – all are firing like crazy to get the job done.

And that’s why I feel squats have MUCH MORE carryover to sport and real life events compared to the leg press – just by the mere fact that you actually have to, you know, work harder to complete the task.

While many will state that the leg press is a safer alternative to squat variations, I will counter that argument by quoting Dr. Stuart McGill, who in his book Low Back Disorders, states:

“the leg press sometimes causes the pelvis to rotate away from the back rest when the weight is lowered. The resultant lumbar flexion produces herniating conditions for the disc!”

Translation: your back hates you.

Of course, when ANY exercise is done haphazardly it can result in injury – squats included.  But ,why anyone would want to go out of their way to reinforce a faulty motor pattern that will more than likely end up promoting disc herniations is beyond me.  It makes about as much sense as Tom Selleck shaving off his mustache.

Personally I’m not a big fan of mustaches. However, while I can’t really back this up with any recent scientific data, I’m pretty sure I read somewhere that global warming can be attributed solely to the effects Tom Sellecks’s mustache has on women.  Either way, no man should ever give up that kind of power. Ever.

See what I just did there?  I just equated leg presses to Tom Selleck’s mustache.  If that doesn’t impress you, I don’t know what will.

Getting back to the topic at hand:  Am I saying that if you perform leg presses, you’re going to herniate your disc(s)?  No.  But when the world’s ninja of low back research says that leg presses aren’t necessarily a great idea due to the fact that, more often than not, they produce the mechanism for disc herniation, I’m going to listen to him.

Reason 3 (No, Really, They’re a Waste of Space)

Granted, this is the small business owner in me speaking, but from a cost-benefit standpoint, leg press vs. squats is a no-brainer.   Looking at the picture above, can someone tell me how in the heck something the size of a small car can be of any value?

For the same amount of money that it would cost to buy a ginormous leg press (which will take up a lot of space, mind you), we could probably buy two power racks.  Additionally, with the leg press, you can’t really do much more with it than well, leg press.  More to the point, with a power rack, I can have upwards of two to three athletes using it at once, and I can get A LOT more use out of it – squats, rack pulls, single leg variations, pull-up variations, push-ups off the pins, not to mention I can also hang a TRX off it as well.  Really, the possibilities are endless.

From a cost-benefit standpoint, it’s not even close.

Well, I’m going to go pack my meals for the day and head to the facility to lift heavy things.  But, I hope that my off the cuff post was able to shed some light on why I’m not a huge fan of leg presses.  Understandably, I realize this post is going to rub some people the wrong way, and it’s going to come across as me bashing the leg press.  Well, I kinda am bashing it – my bad.  The world will go on, I promise you.

That said, I’d be curious to hear everyone else’s opinion on this.  Sound off below…..

Last week I received an email from Jon Goodman. At first I thought he was going to extend an invite to me to come up to Toronto for a weekend of watching Jean Claude van Damme movies. But that wasn’t the case. Fingers crossed for next time. Nope, instead Jon was curious if I’d be… END_OF_DOCUMENT_TOKEN_TO_BE_REPLACED

There are many things that can make your shoulder(s) hate life. Poor programming balance Less than stellar exercise technique Muscular imbalances Bony adaptations (acromion type Poor scapular kinematics Orcs And, for some, we could even make the case for faulty breathing mechanics and/or contralateral hip/ankle mobility restrictions. I try not to get that into the… END_OF_DOCUMENT_TOKEN_TO_BE_REPLACED