It’s the day after Christmas, and I’d be lying if I said I wasn’t just a little bit bummed.  All that preparation and suspense leading up to the big day, and seemingly, it’s over in just a blink of an eye.  I don’t know about you, but mine was wonderful, and I soaked up every minute of it yesterday.

It started off Christmas Eve night where Lisa and I had dinner reservations at a local restaurant right down the street from our apartment.  To say that I ate really well all last week would be an understatement.  All told, I had filet mignon TWICE, as well as a decadent rump roast yesterday.  And don’t even get me started on all the desserts that have been sneaking their way onto my plate.  Whatever….it’s the Holidays, right?

Anyways, yesterday morning, Lisa and I woke up early to get the party started.  For both of us, growing up (me in New York, her in Florida), exchanging Christmas stockings was a significant part of the celebration, and we both decided to continue with that tradition ourselves.

Afterwards, we heading out into the living room to exchange gifts. I won’t bore you with the details of what we got for one another, but lets just say that while she didn’t get a Nintendo 64, this is pretty close to Lisa’s reaction when she opened up her (main) present.

Okay, what the hell. I shouldn’t leave everyone hanging like that. I got her a Macbook Pro (ie:  not a ring, but a close second). The look on her face when she opened it, and the reaction that followed, was easily the best Christmas present that I got this year. It was priceless.

What’s more, Dagny, our cat, even got a little sumthin sumthin from Santa.  Catnip!

Come to find out – she LOVES the stuff.  We mistakenly left the (sealed) bag up on the living room table last night, only to get up this morning to find the bag ripped to shreds and catnip all over the living and dining room floor.  I can only imagine the state of frolicsome bliss she was in.

In any case, for those those reading who it pertains to, here’s my sincerest hopes that the Holiday season was a safe and happy one.

In light of a post that my good friend Bret Contreras put up last week – The Three Most Idiotic Things I’ve Done as a Personal Trainer – after reading it, I felt compelled to “steal” his thunder and throw my hat into the ring as well.

Much like I Bret, I’ve been training people for upwards of a decade now, and while I’ve had many successes and rewarding experiences in that time frame, I’ve also had my fair share of epic fails.

In no particular order, here are a few that come to mind.

You know the saying “you shouldn’t assume anything, because it makes an ASS out of U and ME?”  Well, I learned this one the hard way. 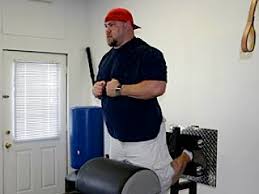 It was three summers ago (summer of 2008), and we had only been in our new facility for a couple of months. As is the case, we had seen an influx of new clientele make their way in, and one such client was a graduate student from Boston who was preparing for his very first powerlifting meet.

Giving full disclosure, I had been writing his programs for the past 2-3 months, and knew that he had a few quality training years under his belt. At any rate, this particular month, I had programmed GHRs and didn’t think anything of it. I mean, all along he had been performing more advanced exercises:  SSB squats, conventional deadlifts, front squats vs. chains, you name it.

….can you sense the foreshadowing yet?

Typically with any new (monthly) program, we generally like to walk people through it to make sure they know what everything is and that there’s no confusion.

***I was surprised because most college students rarely – if ever – have access to a glute ham raise machine.

Him:  Well, yeah, kinda…..just not with a GHR like yours.

He proceeds to hop on, places his knees against the pads, and his feel above the foot rollers, not in between.  Before I could say anything, he starts.  Almost as if it were in slow motion, he proceeds to flip over and lands face first onto the ground.

I was freaking speechless. I couldn’t believe what just happened, and all I could do was stare.

He quickly got up, and walked to the bathroom. I followed. He had a bloody lip, and we noticed, too, that he had chipped his front tooth – which he mentioned he had work on a few days prior at the dentist’s office.

I felt bad, but even worse, he felt embarassed.

He left a few minutes after to make an emergency trip to the dentist’s office, and luckily there were no long-standing ramifications.  He came in the following week and we all had a good laugh about it, but it just goes to show that you CAN NOT assume anything as a coach.  No matter how confident you feel about someone’s abilities, it’s important to remember that it’s your job to make sure people know what they’re doing and understand how to properly perform any given exercise.

Back when I was a personal trainer in Connecticut, I was working with several younger athletes – one of which was the son of one of my older female clients.

One day we were performing some dumbbell flat bench presses, when I decided we needed to up the weight a bit. Without really showing one iota of common sense – in mid set – I slapped on a pair of plate mates.

After like two reps – and with the gym owner coincidentally right behind me, watching – one of the plate mates slipped off and fell right onto the kid’s forehead.

The owner, Jim, busts into action and immediately grabs a towel and applies pressure.  It wasn’t like blood was gushing out, but enough to the point where we had to put a couple of band-aids on and send him home.

This isn’t a slight against plate mates – they’re an awesome tool – it’s just that I had a brain fart and was careless.  As a coach – it’s my job to be “present” and to use better judgement.  That was an instance where I failed miserably.

3. Realizing That I’m Not the Bees Knees

** the following is actually an excerpt from a post I participated in over on Jon Goodman’s site, HERE.

Not so much now, but most definitely back in the day, I thought I was the bees knees.  I mean, I read books on training, and even watched a dvd here and there – so it only made sense (at least in my eyes) that I knew everything there was to know about anything – ESPECIALLY when it came to training people.

When I first entered the industry and started training people one-on-one, I’d try my best to wow them with fancy words (synergistic dominance anyone?) and go out of my way to show how much they needed my help, nit-picking every minute detail of their assessment (Look at that!  Your left big toe only dorsiflexes 12 degrees.  OMG – we need to fix that).

The fact of the matter is, they don’t care.  Sure, it may sound cool (to you), but all your clients want to hear is whether or not you can get them from point A to point B.  Whether it’s helping them lose 20 lbs of fat, improving their deadlift, or helping them understand that performing endless repetitions of sit-ups probably isn’t doing their chronic back pain any favors – no cares how much you know, until the know how much you care.

While I could certainly sit here and come up with ten more examples, I think I’ll stop there.  Besides, the title of this post did say THREE and not TEN Coaching Fails.

Suffice it to say, I feel it’s good to demonstrate some humility from time to time, and it’s valuable to look back and learn from our mistakes. No one is perfect, right?

Do you have any similar stories?  Share them below.

Being human means being enamored by a litany of things in the health/wellness/physical preparation realm. Some people are easily swooned by fancy watches and elaborate looking exercises Others by cryochambers and Paleo recipes that taste like sawdust. I am not here to play judgement police. For the most part, everything has a time and place… END_OF_DOCUMENT_TOKEN_TO_BE_REPLACED

Back tweaks are an inevitability. They happen to people who lifts weights regularly, and those who just look at weights. They happen when doing something as inane as bending over to tie your shoes, as well as when you’re doing some less inane, like, fighting crime at night. They happen on a Wednesday. There’s no… END_OF_DOCUMENT_TOKEN_TO_BE_REPLACED