My bad in getting this one up later than usual. Better late than never, right?

1. First off let me just say that my most sincere and heartfelt condolences go out to the people most effected by the tragic events this past weekend in Colorado.  In a way we’re ALL affected, and it just saddens me that so many people had their lives forever changed by such an egregious and pathetic individual.

I can’t even begin to imagine what it must have been like to go through something so surreal, and there’s really nothing I can say that will help heal those who lost loved ones and are currently suffering.

2. To that end. I did go see The Dark Knight Rises yesterday (along with the rest of the world), and all I have to say is:

It was everything I expected it to be, and more.  I don’t want to say too much in case there are people reading who haven’t seen it yet, but lets just say it was epic to the epic degree.

Admittedly, I don’t think there were as many “memorable” scenes compared to The Dark Knight, but Christopher Nolan did an amazing job and this was a solid (SOLID) film.

What’s more, did anyone else destroy the back of their pants when they saw the teaser trailer for next summer’s Man of Steel?

Here’s hoping that both Zach Snyder and Christopher Nolan can undo the walking pile of cow dung that was Superman Returns.

By the looks of the one minute and 34 seconds above:  they TOTALLY will.

3.  Soooooooo my girlfriend is in Europe for the next month. Serving two purposes: A). as a present to herself for attaining her PhD, and  B). as one last hurrah before she enters the “real world,” she left for Germany this past Tuesday to visit an old high-school friend of hers, who’s husband is stationed there as part of the military.

Lisa has been planning this trip for months, and as I type this post she and her friend are exploring the hills of Tuscany (Italy) and then heading back to Germany to spend the next few weeks doing whatever it is that two grown women do.  Presumably having pillow fights, braiding one another’s hair, and drinking copious amounts of German beer.

Before she left Lisa made sure to stock the fridge with at least one week’s worth of prepared meals and also gave me a laundry list of things to do while she’s away.  You know, the staples like water the plants, feed the cat, and take a shower.

And of course, no laundry list is complete without a note saying “DO NOT FORGET TO DO THE LAUNDRY!!!!!!!!”

Like a champ I’ve been on top of everything this week:  cat is still alive, plants are still green, and I’m down to one pair of clean underwear, but I have things under control.

The fridge, however, is empty! While I did hit up the grocery store to buy the basics, there’s no longer any prepared food in sight.

How messed up would it be if in a few weeks when Lisa comes back, I look like Christian Bale’s character from The Machinist?

Okay, that’s not going to happen.  I hope.

No but seriously, I’m scared.

The last set was arguably my best set of the day.  Bar speed was pretty fast and my back didn’t bother me at all.

Dean and I are still playing it a little conservative on the programming front, but needless to say, I’m ecstatic with my progress in only a matter of four weeks.

Four weeks ago I couldn’t even sneeze without dropping an f-bomb.  And now I’m hitting 500+ lb deadlifts like the Tony of old.

5.  The following rant is a direct result of reading THIS article from John Romaniello, who has a much more eloquent way with words than myself.

As a health and fitness professional, I like to think that I have pretty good grasp of what the latest research has to say on a variety of topics related to my field.

Heart disease:  cholesterol has little – if any – effect on one’s predisposition to having a heart attack. Inflammation – more specifically, endothelial dysfunction, and how to control it, along with suppressing inflammatory markers like c-Reactive Protein – is the main thing to keep your eye on.

Taking it step further  – with regards to the world I live in (strength and conditioning) – you have numerous studies coming out weekly on what the best approach is for making people bigger, faster, and stronger.  Likewise, there’s a plethora of research stating which muscles do what, how fascia effects EVERYTHING, and what we can do as coaches to help make our athletes (and clients) better.

I like research.  I hate reading it, but I understand that research is an important component of what I do and how I go about writing safe and effective programs.

I just really, really, REALLY get irritated when people attempt to use research to explain EVERYTHING.

Sometimes what works, works. Who cares how.

Not everything can be explained in a controlled lab setting by dudes in white coats who haven’t lifted anything heavier than a Bunsen burner in the past decade.

Note: I actually know some jacked up lab nerds, so I’m not throwing all of them under the bus……;o)

I don’t need research to tell me that throwing my face into a brick wall will probably hurt a little bit.

I don’t know, I just find it comical when people debate things like whether or not to keep the chin tucked when deadlifting or squatting or whether it’s better to hold an isometric contraction for three seconds or 4.345424965399 seconds.

Don’t get me wrong, I think research is integral – I use it every now and then to prove a point*** – and it helps “govern” our industry, but not everything HAS to be explained in a lab, does it?

6.  And finally, for those who are addicted to behavioral economics (like me) and are 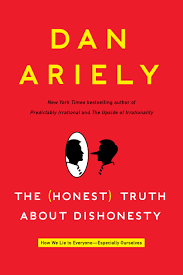 looking for an awesome book to read, I HIGHLY suggest Dan Ariely’s new book, The (Honest) Truth About Dishonesty:  How We Lie to Everyone – Especially Ourselves.

I’m a huge fan Ariely’s work having read his previous two books (The Upside of Irrationality, and Predictably Irrational), and this one doesn’t disappoint.

If it’s any consolation, I read it in two days and much of what it covers is applicable to the fitness industry.

***The best example I have is a brief story from when I first started training people back in 2003.  I had just started working at a commercial gym in Syracuse, NY and was helping a young female client with her deadlift technique.  We literally completed her first set – like, EVER – of deadlifts. It didn’t look pretty, and I was about to make some comments when one of the AEROBICS INSTRUCTORS high tailed it over to ask what I was doing.

“You shouldn’t be performing those like that,” she chimed in.  You’re placing way too much strain on her spine and you’re going to hurt her!”

While I wanted to drop kick this woman in the liver for going out of her way to not only interrupt my session, but doing a fairly good job of compromising my expertise in front of my client, I handled it as professionally as I could.

I said, “thanks, I have it under control,” and went on to complete my session.

Afterwards, however, it was game motherfuckin on.

I went home that night and looked up at least ten different studies demonstrating how ground reaction forces during AEROBICS classes placed waaaaaaaay more “stress” on the spine than lifting a barbell off the ground.  I also chimed in with some spinal biomechanics, and invited her to come and talk to me anytime she wanted to chat about how to train clients.

Needless to say, we didn’t exchange X-mas cards that year.

Fair warning: This will not be an all-encompassing post on how to train the shoulders or how to program around nagging shoulder injuries. Frankly, I don’t think anyone wants to read a Dostoyevsky length diatribe on shoulder impingement or how improving scapular upward rotation leaves me sexually aroused. Yep, I’m weird. Instead I want to give… END_OF_DOCUMENT_TOKEN_TO_BE_REPLACED