Today’s guest post comes to you from Michael Anderson, Boston based strength coach and personal trainer.  Mike has contributed a handful of posts on this site, and this one is yet another fantastic piece.

The medicine ball is often seen as an archaic tool because they’ve been around for so long. Sand filled balls were used as training tools for wrestlers 3000 years ago in Persia and Greece. Savages who were preparing to do hand to hand battle were using these, and now they’ve been relegated to this; being used by dorky personal trainers to load their weak clients in a crappy exercise.

Frankly, this is B to the S. This makes me as mad as seeing people using kettlebells instead of dumbbells for regular exercises like biceps curls or triceps extensions. The 18-pound kettlebell you’re curling with shouldn’t even be considered a real kettlebell! But I digress; that’s a topic for a different day.

Medicine balls can, and should, be used to make you explosive as hell. Notice that I used the word “explosive” and not “strong”. Medicine balls should be used in a forceful fashion; save the nice controlled tempo for barbells and dumbbells.

Note from TG:  although, to be fair (and I think Mike will agree), I’ll always encourage people to be “explosive” with their DB and BB exercises as well – particularly on the concentric or overcoming portion of the lift.

It’s just that with med ball training, the objective – ALWAYS – is to be explosive and to help develop power.

These things are strong (or should be). They are made to be tough, rugged and to take a beating. Unless you’re a medicine ball that is unlucky enough to be destined for Cressey Performance. 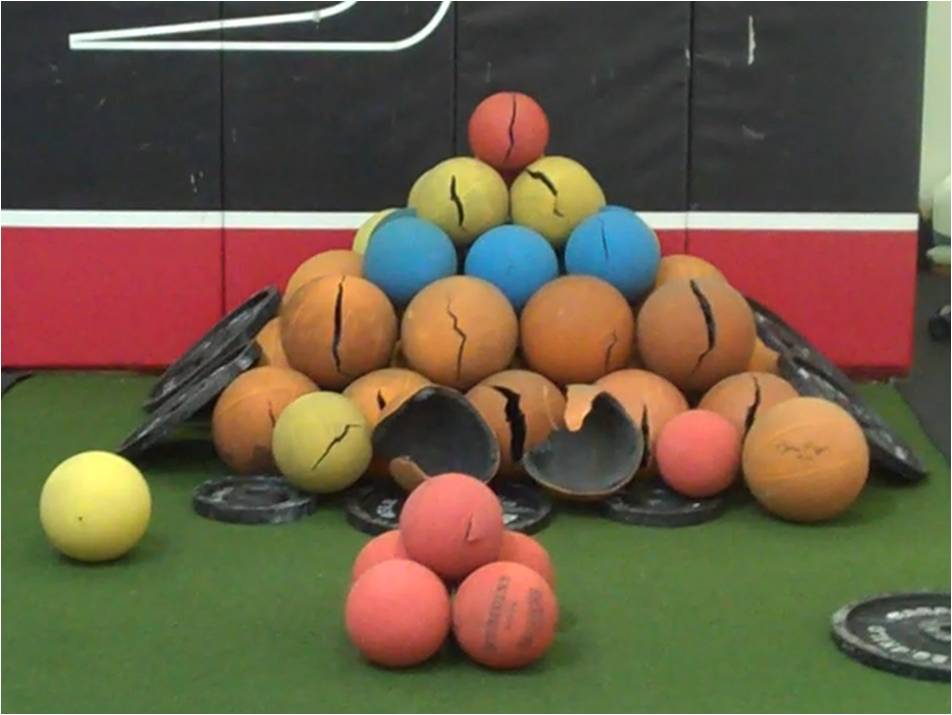 Note from TG (again): There’s no question that we absolutely crush med ball at Cressey Performance.  We used to use First Place med balls exclusively (pictured above), and had great success with them, but at some point they changed rubber manufacturers and their durability went down the tubes.

What once took a few weeks (if not months) to eventually break, turned into days…..sometime hours.

Now we use DynaMax med balls and love them.

Here are some of the most common medicine ball mistakes that I have seen during my time in both commercial gyms and strength facilities:

Not throwing the damned ball.

More often than not, when I see someone doing a medicine ball drill, they are simply completing the exercise in a fashion that could most aptly be described as “flaccid”.

Moving a MB with a submaximal force does nothing besides make you look like a turd. When you step up to do a drill, you should be prepared to produce the maximal amount of force that you can for the given exercise. This is not the time to be gentle: act like you are trying to kill something with the ball. Anything less and you won’t be getting the right training effect.

Hey there!  It’s me again, TG: Two great cues we like to use at CP when people are quote on quote “being turds” while throwing the med ball are:

Here is an example of how different they will look: one is powerful and awesome. One is lazy and foolish.

Using a ball that is too heavy.

A ball that is too heavy is going to limit the amount of velocity (v=d/t…check me out with the equation!) that you can produce.

The name of the game when throwing a medicine ball is to move it as quickly as violently as possible. Yes, you can argue, that throwing a heavier ball will result in the produce of more force (f=m*a).  This is true in theory, but not in practice.

Using a heavy ball will simply make you move slowly, and you want to move fast. If it doesn’t look fast, it’s not fast. Mike Boyle used to tell people to “make it look athletic”. Clumsily throwing a ball thats too heavy certainly doesn’t look athletic.

This is a personal preference, to be honest. I find that it’s analogous to jumping back down after completing a box jump. I want each rep to be a separate entity so that you are only concerned about being able to produce as much force as possible for each rep.

Using the bounce of the ball allows you to move faster through the exercise, but not produce more force. While there is nothing wrong with the other way, I simply think too many people rely on it. There may be instances when you want your athletes to learn to quickly receive the ball and return it forcefully, but it’s a more advanced variation that has a more limited application.

Using them to mimic sporting movements

This is one that falls on the coach specifically. If any coach or trainer starts telling you, as an athlete, that they will be utilizing medicine balls/loaded balls to strengthen your sporting motion, tell them to sit on a blender. Throwing or shooting a weighted ball will do nothing but murder your mechanics and probably inflict some serious injury to your joints. A baseball weighs 5 oz and a basketball weighs 20 oz, performing your mechanics with a ball that is twice the weight will simply butcher anything you go do on the court afterwards.

Note from TG:  We do implement SOME weighted ball drills with SOME of our pitchers – typically at the end of their throwing session at a distance of 10 or so feet into the matting. But as a whole, they encompass a fraction (10-15 throws total) of their total throwing volume.

Thanks for reading today! I hope you enjoyed it, and if you get a chance please go check this out (http://operationrun365.blogspot.com/) and help a great cause. Have a great day and go lift something heavy!

Being human means being enamored by a litany of things in the health/wellness/physical preparation realm. Some people are easily swooned by fancy watches and elaborate looking exercises Others by cryochambers and Paleo recipes that taste like sawdust. I am not here to play judgement police. For the most part, everything has a time and place… END_OF_DOCUMENT_TOKEN_TO_BE_REPLACED

Back tweaks are an inevitability. They happen to people who lifts weights regularly, and those who just look at weights. They happen when doing something as inane as bending over to tie your shoes, as well as when you’re doing some less inane, like, fighting crime at night. They happen on a Wednesday. There’s no… END_OF_DOCUMENT_TOKEN_TO_BE_REPLACED