Do Assessments “Need” to Be New and Exciting?

I’ve been doing a lot more traveling this past year.  Some for pleasure, mostly for work, but sometimes I’m fortunate and get to combine the two which is always cool.

In the past two months alone I’ve been to Cortland, NY (which doesn’t really count since that’s basically my home town), Fargo, North Dakota, and Kansas City, Missouri….all of which were for speaking engagements

Next week I’m heading to Cancun, Mexico to spend 4th of July with Lisa and some of her family. In addition I’ll also take part in a 1-day “coaching the coaches” workshop at Warrior Fitness where I’ll have the opportunity to talk shop with a dozen or so local trainers and coaches, and possibly discuss my secret fascination with Lucha libre; or Mexico’s version of “free wrestling.”

In short, I have every intention of going all Nacho Libre on their asses!

But seriously, the game plan is to break down how to coach the squat, deadlift, bench press, Turkish get-up, and, oh who am I kidding…….the piledriver, too!

Later this summer I may be doing some staff in-services for SportsClub LA, which takes us into the fall where my schedule kicks into overdrive.

Dean Somerset and I will be in London (Sept) and Washington, DC (Oct) for our Excellent Workshop High Five, and we’re also looking at adding a date in  Los Angeles in November.

And, serving as a bit of a teaser, all signs point to me (and Lisa) heading to Australia in March 2015 for two separate, 2-day workshops in both Sydney and Ballina respectively. Nothing is set in stone yet, but the prospect of being able to put some of my Crocodile Dundee quotes to good use is making me pee my pants.

After all that, what’s left is trying to set-up dates in Hoth, Minas Tirith, and Cybertron. Fingers crossed.

My point to all of this is something that came up a week or so ago. Now that I’m “in demand” and traveling more for work, it’s always interesting some of the feedback I receive from my presentations.

As an example, my use of colorful language has come up. Whereas on the east coast, and Boston in particular, talking like a sailor and peppering a few f-bombs here in there is the norm, in the mid-West it may come across as bit more juvenile and un-professional. And that makes a lot of sense.

This is something I’ve had to learn and adapt to the more and more I’ve travelled to different places. But, in general, a good rule of thumb is to not be too gratuitous with language and make references to explosive diarrhea with a bunch of doctors in the audience.

However, on a more relevant level I’ve noticed another “theme” that’s been present the more I’ve spoken. It’s nothing glaring and it’s more the minority mindset, but it’s been brought up a handful of times.

And it’s the notion that I don’t offer anything “new or exciting.”

To be more specific, I had someone comment that I offered “nothing new or exciting” with regards to shoulder assessment as part of a presenter evaluation for a recent speaking engagement.

I’m all for constructive criticism and I appreciated the feedback, but since when did assessment or screens need to be exciting or revolutionary?

Sometimes it comes down to doing the “boring stuff” correctly, no?

I’ll be the first to admit that I’m NOT a researcher, and the likelihood I’ll ever offer anything “revolutionary” is on par with Justin Bieber not coming across somewhat douchy.

This is also the same mentality I take with program design. Boring is generally what works best for most people in most situations. Focusing on the principles – whether it be assessment or program design or “insert whatever you want here” – is what many people overlook, and why most tend to miss the forest for the trees.

How am I supposed to make shoulder assessment more glamorous?  Do I need to add some pyrotechnics?  Have them juggle a pair of chainsaws? Please, tell me!

Walk into an assessment or screen at Cressey Performance and you’re bound to see things like:

1.  Looking at standing/static posture. Posteriorly, what’s the medial border of the scapulae tell you?  Is the inferior border closer to the spine than then superior border, as shown in the pic below (which is of me by the way, taken from Eric Cressey and Mike Reinold’s Functional Stability Training of the Upper Body). 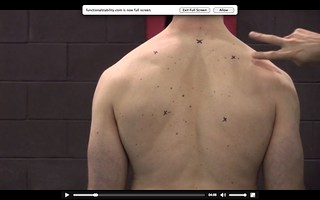 If so, the scapulae are downwardly rotated and could be the root cause of someone’s shoulder pain.

How about anteriorly?  What about clavicular angle? Drawing a line from the medial border of the sternum along the clavicle, does one present with a more horizontal angle? 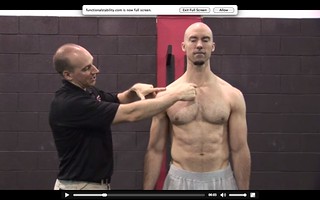 If so, that’s not ideal.  We’d like to see a 10-15 degree upslope of the clavicle.  Again, this translates to a “depressed” shoulder girdle  and downward rotation emphasis.

2.  If someone presents with a wonky static posture (<=== how’s that for a scientific term?), you can almost guarantee they’re going to present with aberrant movement patterns with regards to standing shoulder flexion or when testing scapulohumeral rhythm.

Then again, they could “fix” things once you start adding dynamic movement, but you’re never going to know unless you screen/assess for it.

Admittedly, these tests aren’t sexy or revolutionary….but they sure as hell get the job done. And, when done right, consistently, offer more than enough feedback and information to come up with an appropriate corrective strategy and training program.

Sans fireworks or anything “new and exciting.”

I received a question recently via my Instagram DM’s and figured it prudent to take some time to write a more thorough response I could share with the masses here. 1. I hope it helps and makes sense. 2. Um, why aren’t you following me on IG? Here’s the question: “What is your response to… END_OF_DOCUMENT_TOKEN_TO_BE_REPLACED

Fitness professionals are notorious for myriad of things: Wearing sweatpants to work everyday. It’s definitely one of the perks of the job. Always forgetting about the protein shake shaker in their gym bag (or in their car) that invariably, three weeks later, ends up melting someone’s face off once it’s opened. Their affinity for smedium… END_OF_DOCUMENT_TOKEN_TO_BE_REPLACED