What The Princess Bride Can Teach You About Dealing With Critics

Behind deadlifting and eating carrot cake my next most favorite thing to do in the world (that’s PG-13 enough to discuss on this blog, wink wink, nudge nudge) is watching movies.

I’d say “going to the theater” or “watching film,” but I don’t want to come across as some uppity, Pruis driving, bourgeoisie snob.

I go the movies dammit.  Just like I order large drinks at Starbucks and not “Grande,” and prefer to not correct people when they refer to soccer as futbol and not, well, soccer.

For those that do do that….get over yourself will ya!

I often joke that if I weren’t a strength coach or baseball player (or professional tank driver), I’d opt to watch, review, and write about movies. I freakin loooooooove watching movies.

As many of you know, and maybe sometimes hate, I often digress about the movies I go see or make random pop cultural references to movie quotes all the time on this blog. One minute I’m discussing rotary stability and how it applies to rotational sports, and the next I’m quoting Tarantino or making my 118,306th reference to Star Wars.

It’s my blog, so unfortunately you have to suck it up and deal with it. But I do try really hard to stay on task and keep it strictly fitness and lifting heavy things 98.97% of the time.

This is not one of those times.  At least, not entirely.  Bear with me.

Going back to my movie obsession, as it happens I’m a member of the local independent theater house here in Brookline, The Coolidge Corner Theater, or The Coolidge for short.

It’s an amazing place, showcasing smaller, lesser known, independent movies, some of which have subtitles and stuff (okay, fair enough, I’m getting a little snobby, sorry), and as a member I’m privy to many of the special events they’ll host throughout the year.

Last night Lisa and I were able to attend a special advance screening of director Rob Reiner’s upcoming movie And So It Goes, starring Michael Douglass and Diane Keaton, and afterwards, Rob Reiner himself appeared in person for a brief Q & A. 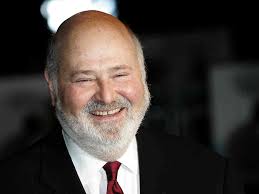 Freakin Rob Reiner.  In person!!!  The man is a legend!  You’d be hard pressed to discuss the history of Hollywood and not mention his name at some point.  On top of being an established actor (TV show All in the Family, as well as numerous bit roles in movies like Sleepless in Seattle, Edtv and The Wolf of Wall Street), where he’s (arguably) more recognized and established is as a director.

See if you recognize any of these famous quotes from movies he’s directed.

1. “My name is Inigo Montoya.  You killed my father, prepare to die!”

Note:  Quick movie trivia.  The woman who actually says “I’ll have what she’s having” at the end of the scene is Rob Reiner’s mother, Estelle.

If you’re a movie buff (or even if you’re not), chances are you’ve seen one of his films.

So needless to say, I was in full on fan-boy, geek fest mode when Mr. Reiner showed up last night to discuss his latest project as well as answer questions from the audience. Here’s a pic I took from my seat:

I was too much of a wimp to ask anything, fearing I’d pull a Chris Farley from his uproarious skit back in the day on Saturday Night Live, The Chris Farley Show.

However, there was one question asked from another audience member that struck a chord with me which had a lot of relevance to the fitness world.  And Mr. Reiner’s answer was the tits.

The question related to the movie and how it ended. Don’t worry I won’t spoil anything, but the audience member asked whether or not he (Mr. Reiner) would take issue with the critics (possibly) bashing it and whether or not it would bother him?

SLIGHT Spoiler Alert:  the movie ends in a predicable, borderline overly sentimental fashion, and Mr. Reiner himself was quick to note that he KNOWS that that will be what many of the critics will take issue with.

He went on to say, “I’ve had a fair share of bad reviews, as well as been fortunate enough to receive many good ones.  In the end, though, I don’t really pay much attention to what critics say because, when all is said and done, I’m doing what I love to do.

To bring his point home, he went on to share two anecdotes.

One was about a baseball player –  I don’t remember who – whom he idolized as a kid growing up.  He remarked how this particular athlete, during his rookie year, would demonstrate an extreme spectrum of emotions.  Whenever he hit a home-run he’d be super excited and jump all over the place.  Conversely, whenever he struck out, he’d toss his bat, yell, and go into tantrums.

This is not dissimilar to what Mr. Reiner had gone through with critics or what I (or anyone else who makes a part of their living writing) goes through.  You have those people who go out of their way to praise your work (and you react one way), and you have those people who are life-sucking vampire doucheholes who go out of their way to shit on your work (and as a result, you react another way, and not coincidentally they deserve a raging case of genital herpes). 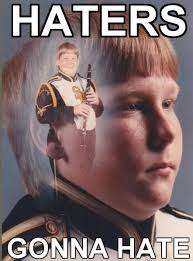 The moral of the story was that it wasn’t until later in his career  when the baseball player realized that BOTH events – hitting home runs and striking out – were part of the game and that both came with territory.

Coach Wooden is widely regarded as the human equivalent of Yoda (make that 118,307 references!), and there are endless stories of him sharing sage advice. In this case, the story revolved around him telling his players that it’s okay to act one way when you win a game, as it’s okay to act the polar opposite when you lose.

The key is to make sure that once you leave the arena and you’re around friends, family, and loved ones that they won’t be able to tell the difference.

You leave happens there, there.  And you don’t take it with you.

Which is as appropriate of a segue as any to my point.

I’m often asked by interns that pass through Cressey Performance or by others I know if it ever bothers me when someone goes out of their way to be nasty or derogatory towards me with an article I write or anything else I put out there?

I’d like to think that I consistently put out good content and that it doesn’t happen often, but sure, yeah, sometimes it bothers me.  I’m human after all.

When I first started getting stuff published some remarks I’d receive would bother me a lot. It dumbfounded me how some people, without even knowing me, would say some really mean things.

I’d grab a pint of Ben&Jerry’s, put on Notting Hill and cry myself to sleep.

Of course, if I said something wrong and someone called me out or corrected me, I’d own up to it (and still do)…..but I’ve learned to tune out the ad hominem garbage that some people spew no matter what.

Likewise, I don’t expect every person to agree 100% with everything I write about, and I’ve learned to accept (and respect) other’s opinions.  Unless they’re just flat out wrong. Then I’ll push back a bit.

That said, at the end of the day, much like Mr. Reiner, I don’t care what critics or internet meanie heads have to say. And if you’re someone just starting out in the industry and exploring putting your stuff out there for the masses to see, you should feel the same way (in time).

Don’t get me wrong:  it’s one thing to have open dialogue and discourse with people with varying opinions, especially within the context of the learning process.  But if it comes down to someone simply “not liking” an article or blog post, who cares?

I take pride in what I do as a coach.  I help people on a daily basis get better and achieve things they never thought possible.  Too, I take pride in the creative process of writing. This shit is hard, and I challenge anyone to try to CONSISTENTLY put out quality content.  Many times for free.

I have the opportunity to reach and inspire thousands of people.  How cool is that?  I can’t expect to please every single one, however.

What matters most to me is that I’m a good coach to my athletes and clients, I’m a good boyfriend to my wonderful girlfriend, I’m a son, a brother, a friend, and I’m just being me.

What some random person who probably has never trained anyone in his or her life and thinks they know everything there is to know about strength and conditioning because they read SuperTraining once five years ago has to say about one of my articles doesn’t matter.

If it’s high praise, cool….thank you!   I can’t tell how much I appreciate that.

If it’s negative, derogatory, or otherwise devoid of any constructive criticism what-so-ever, that’s cool too. I guess.  I  just hope that person has a massive case of explosive diarrhea.  Just kidding. But not really.

Either way, and especially in the case of the latter, I’ll move on with my life.  I encourage others who are creative junkies to do the same.

I received a question recently via my Instagram DM’s and figured it prudent to take some time to write a more thorough response I could share with the masses here. 1. I hope it helps and makes sense. 2. Um, why aren’t you following me on IG? Here’s the question: “What is your response to… END_OF_DOCUMENT_TOKEN_TO_BE_REPLACED

Fitness professionals are notorious for myriad of things: Wearing sweatpants to work everyday. It’s definitely one of the perks of the job. Always forgetting about the protein shake shaker in their gym bag (or in their car) that invariably, three weeks later, ends up melting someone’s face off once it’s opened. Their affinity for smedium… END_OF_DOCUMENT_TOKEN_TO_BE_REPLACED