Confessions of an Introverted Strength Coach – Part I

Hi. My name is Tony Gentilcore, and I’m an introvert.

I always have been, and always will be. And, if I’m going to be honest with myself it’s only been within the last few years of my adult life where I’ve accepted it, embraced it, and recognized that it’s played a massive role in not only molding me into the person I am today, but that it’s also played a role in my success as a coach, trainer, and writer.

To that point, I’d be doing a huge disservice to all those reading if I didn’t direct you to the outstanding book, Quiet: The Power of Introverts in a World That Can’t Stop Talking, by Susan Cain.

If there was ever a book that “spoke” to me (and to all introverts), this was it.  I can’t recommend it enough.

In the introduction Cain notes that “there are almost as many definitions of introvert and extrovert as there are personality psychologists, who spend a great deal of time arguing over which meaning in most accurate.”

1. Introverts and extroverts differ in the level of outside stimulation that they need to function well.  Introverts feel “just right” with less stimulation, as when they go for leisurely walks, have coffee with a close friend, read a book, or, in the case of me, watch a movie alone.

Extroverts are the exact opposite and tend to gain energy and re-charge by being around more people, meeting new people, and seeking out stimulation.

This is something that describes my relationship with my girlfriend to a “T.” By the time the weekend rolls around, I’m ready to veg the f*** out, plop on the couch, and become a home-body. Lisa, on the other hand, at times, would prefer to go out and meet up with friends and socialize.

I remember one instance when we first started dating heading out into the city to meet up with a bunch of her friends at some swanky lounge.

I spend the bulk of my week constantly stimulated by overactive athletes, weights clanking together and being dropped to the ground, and loud my-mother-never-loved-me music blaring over the stereo.  The last thing I want to do once the weekend arrives is go to a crowded bar.

But relationships are all about compromise, right?

Well, I did it……and while I can usually suck it up and be social (when I have to be), in this one instance it was just too much. I was withdrawn, I wasn’t interacting with anyone, and when I was engaged by someone I’d respond with one word answers. I was miserable and I’m sure I looked it, too.

I’ll be the first to admit I was a asshat that night, that I was a jerk and that I probably slept on the couch when we got home (I can’t remember).

The silver lining, however, was that Lisa and ended up having a long discussion about it a few days later.  We came to the conclusion I just need to communicate with here when something is too much or if I’ve had enough. If I need a night of “Tony Time” (I.e., nights where I can go to the local coffee shop and read, write, or watch LOLCat videos), then all I need to do is let her know.  No harm-no foul.

We literally came to terms with our introvert-extrovert dichotomy.

2.  There are a host of other attributes that can breakdown both personality types that Ms. Cain addresses in her book.  Some other highlights: 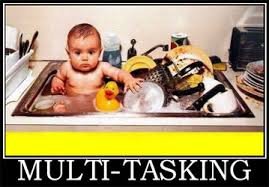 and are comfortable multi-tasking.  They enjoy the “thrill of the chase” for rewards like money and status.

– Introverts often work more slowly and deliberately. They like to focus on one task at a time and can have Jedi-like powers when it comes to concentration.

– Introverts, not so much. They listen more than they talk, think before they speak, and (I 100% relate to this) feel as if they can express themselves better in writing than in conversation.

Being deemed introverted – whether it’s “self diagnosed” or not – has had a history of having a bad or unfavorable connotation in our society.

Hermit, misanthrope, recluse, and “anti-social” are all common adjectives used to describe an introvert. Highly intelligent and good-looking rank up there as well (<– it’s science).

Shy is also a common word tossed around to describe introverts.  As Cain states, “Shyness is the fear of social disapproval or humiliation, while introversion is a preference for environments that are not overstimulating.” 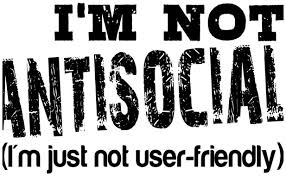 Which lends itself to the next question:  how do you know whether you’re an introvert or extrovert?

The “go to” resource for that would be the Jung Typology Test or how it’s better known…the Myers-Briggs Personality Test.

It’s a quick test, totaling 72 questions, all designed to give you a 4-letter formula which will serve as the crystal ball into your personality type.

Honestly, I think they could have narrowed it down to ONE question:

1.  Do you own a cat, and if so, is it like, the cutest most adorable thing in the history of the world?

Kidding aside (I should note that it took a lot of will-power on my part NOT to include a picture of my cat here), the Myers-Briggs test, while not perfect, will help give people a little more insight as to which side of the fence they reside on.

You’ve taken the test, you have a group of 4-letters jotted down on a piece of paper, and after deciphering what they mean, you’ve come to conclusion that you’re an introvert.

As much as introversion has a negative stigma in regular ol’ society (and hopefully by now you understand that it shouldn’t be stigmatized), I think it’s twofold in the fitness industry.

Shows like The Biggest Loser don’t help matters.  The trainers and coaches on that show (and I use the word “coaches” lightly here, as I feel they’re namely actors playing the role of coaches) have a very in-your-face, crude, and quite frankly, obnoxious way of going about things.

Screaming and yelling and insulting their clients is the name of the game. Unfortunately this is what most regular people expect when they hire a personal trainer or coach.

In the same vein, many will watch YouTube clips like the one below of Alabama strength coach, Scott Cochran, and assume that this is the norm:

This isn’t to disrespect Coach Cochran – his results obviously speak for themselves – but this is a FAR cry from the norm.

None of the coaches at Cressey Sports Performance act like this.  This isn’t to say that none of us ever get animated or pumped up or start screaming and yelling to motivate someone…..but it’s an exception and not the rule.

I’m the farthest thing from a rah-rah coach. I don’t do a lot of yelling, I don’t get in people’s faces, and I tend to keep a calm, cool, and collected demeanor at all times. And my athletes and clients do just fine.

In tomorrow’s post I’ll outline some strategies I – as well as some of the other coaches at CSP – use to take advantage of our introverted tendencies.  Not only do you have to understand it from a personal level, but you how you coach and cue INTROVERTED CLIENTS comes into play as well.

Until then, I’d love to hear everyone else’s experiences as an introvert.  Agree with me? Disagree?

Being human means being enamored by a litany of things in the health/wellness/physical preparation realm. Some people are easily swooned by fancy watches and elaborate looking exercises Others by cryochambers and Paleo recipes that taste like sawdust. I am not here to play judgement police. For the most part, everything has a time and place… END_OF_DOCUMENT_TOKEN_TO_BE_REPLACED

Back tweaks are an inevitability. They happen to people who lifts weights regularly, and those who just look at weights. They happen when doing something as inane as bending over to tie your shoes, as well as when you’re doing some less inane, like, fighting crime at night. They happen on a Wednesday. There’s no… END_OF_DOCUMENT_TOKEN_TO_BE_REPLACED