Exercises You Should Be Doing: Band Horizontal Abduction with Press

What’s up everyone!?  I enjoyed a nice, relaxing, extended Labor Day weekend, hence the reason why I didn’t post anything yesterday.

But in case you’re wondering, I was able to catch up on some reading over the past few days and in addition, did what every other guy who’s in a relationship was inevitably dragged into doing yesterday………

……following his girlfriend around as she attacked every Labor Day sale within a ten mile radius.

The Container Store, Macy’s, Limited, Sephora, and I don’t remember  what else. I blacked out after a point.

As you can see Lisa was in seventh heaven.

I, on the other hand, was a beacon of palpable enthusiasm.

Enthusiasm to want to throw an ax into my face. 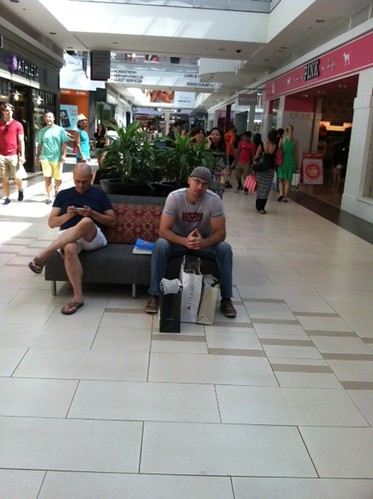 Looking at the picture now, and noticing the gentleman to my right, I can’t help but think of that bench as a some sort of shopping island purgatory for boyfriends/spouses. Hahahaha.

It wasn’t all that bad, though.  I planned a head and brought some reading material to help keep me occupied – the  Starting Strength 3rd Edition.

I’ve read the previous two editions of the book and have to say that this third edition is the bomb diggidy and blows the other two out of the water.

The original(s) were already towards the top of my list of books I routinely recommend to fitness professionals, but this third edition is absurdly good and has now taken the #1 spot.

In any case, shopping nightmares and book recommendations aside I wanted to share a quick video with all of you on one of my new favorite exercises.

Who Did I Steal It From: I first read about (and saw) this exercise over on Mike Reinold’s site when former Cressey Sports Performance intern and now Sayco Performance owner and renowned swimming strength coach, Tad Sayce, wrote about it.

When I first saw it all I could think to myself was 1) this is brilliant and 2) why the hell didn’t I think of that!?!?!

What Does it Do: First and foremost it should be noted that it’s important to get comfortable with and master each component alone before combining the two.

With the obvious out of the way, what I like about this exercise is that it helps reinforce many of the things we try to ingrain with our overhead athletes – as well as those with chronic shoulder issues – which is, proper scapular movement, scapular stability (in both retraction and posterior tilt), and as Tad notes, “the ability to maintain position in the presence of increasing tension.”

And it’s with that last point why I feel this is such a rad exercise. The “press” component adds an anti-rotation component that’s unique to any other exercise of its kind.

Key Coaching Cues: It (should) go without saying, but I have to say it nonetheless.  This IS NOT a max effort exercise you big meathead!  So lets save the super bands for things that actually warrant their use.

I’m more concerned with the QUALITY of this movement, and it’s important to keep this as the running theme while performing it.

Brace the abs and be sure you’re not cranking through your lower back as you perform the abduction component. If you do, the resistance of the band is too much.  The movement should be initiated by retracting the shoulder blade and then abducting the arm until it’s in the “T” position. Another thing to note is to make sure you don’t go too far to the point where the humeral head translates anteriorly.

Once the arm is in the “T” position, gently press with the opposite arm until it’s fully extended out in front of the body.  Pause for a 3-5s count and repeat.

Give it a try and let me know what you think!

I’ve been a fan of “offset” loading for a number of years now. Without getting too deep in the weeds on what offset loading is and what the benefits are… …it’s when you either stagger your foot or hand position on certain exercises OR you load an exercise a certain way (how you hold a… END_OF_DOCUMENT_TOKEN_TO_BE_REPLACED

Last week I received an email from Jon Goodman. At first I thought he was going to extend an invite to me to come up to Toronto for a weekend of watching Jean Claude van Damme movies. But that wasn’t the case. Fingers crossed for next time. Nope, instead Jon was curious if I’d be… END_OF_DOCUMENT_TOKEN_TO_BE_REPLACED