The Princess Bride is one of my all-time favorite movies. It’s a classic, and many fellow movie buffs and connoisseurs will recognize the quote from above.

It’s one of roughly 816 (give or take) memorable lines from the movie, and it’s uttered by Inigo Montoya. Throughout the movie, Sicilian boss Vizzini repeatedly describes the unfolding events as “inconceivable.”

In one scene of the movie, as Vizzini tries to cut a rope that the Dread Pirate Roberts is climbing up, he blurts out in an exasperated tone it was inconceivable that he did not fall.

At this point, Inigo responds with the now famous quote:

So what does this have to do with anything fitness related?

Well, replace the character Inigo with myself, replace the word inconceivable with the word “core,” and you’ll have the exact same scene playing before your eyes. Except, you know, I’d have less chest hair, be a tad more beefy, and in lieu of the swordplay…I’d be rockin some killer nunchuck skills.

What Do You Mean “Core?”

Most abundant, though, would be any number of iterations referring to a Men’s Health Magazine cover:

Or maybe Dr. Spencer Nadolsky (that’s right: a doctor who lifts!) because he’s hunky as balls:

Trust me: there’s a six-pack underneath there.

Make no mistake: when most people think core, they think six-pack abs – or, rectus abdominis, if we wanted to be uppity anatomy nerds – that you can cut diamonds on. Too, they think about all the various exercises in the infinite training toolbox which can be used to carve our said six-pack abs.

Crunches, sit-ups, planks, RKC planks, side planks, planks on one-leg, planks with one arm behind your back, planks with alternate reach, planks on a stability ball, planks blindfolded, planks while fighting zombies, and more planks. Because people like planks.

And they wouldn’t be wrong. The “abs” are certainly part of the core and all the exercises listed above have their time and place. Relax, no need to shit a copy of Ultimate Back Health and Performance because I mentioned crunches and sit-ups. I too am a huge fan of Dr. McGill’s work and understand the pitfalls of repeated spinal flexion.

Occasional unloaded (spinal) flexion, for the right population, also has a time and place. But that’s a conversation for another time.

All of it, however, is a teeny tiny fraction of the entire picture. It’s akin to only being able to see the top right-hand corner of Van Gogh’s Starry Night. And that’s it.

How lame is that?

The core is so much more than what we can see on a magazine cover. There’s the pelvic floor on the bottom, the diaphragm at the top, the rectus abdominis in the front, the obliques (internal & external) on the sides, and the erectors as well as all the “ancillary” support musculature: paraspinals, multifidi, longissimus, iliocostalis (lumborum & thoracis), etc, in the back.

It’s more or less a canister.

In fact, the “core” consists of everything from the neck line down to the hips: pecs, lats, glutes, the sexy”v-taper” leading down to you know where, everything. Or, to be overly simplistic: everything not including the legs, arms, and head.

And its main job, contrary to popular belief, is not to crunch or perform countless sit-ups. Rather, the core’s main function is to counteract rotary movement so that force can be more easily (and efficiently) transferred from the lower body to the upper body, and vice versa.

I mean, if you really look at the way the muscles are oriented (especially in the front) you can see they take on a more inter-connected, inter-laced, weblike presentation…designed to resist hoop stress.

This is why I prefer exercises like various chops and lifts, Pallof presses, rollouts, and Farmer carries…as they all train the core in a more “functional” manner.

Pallof presses, depending on how they’re set up, can train every plane of motion and resist flexion, rotation, and extension. And they’re gluten free!

However, we can’t neglect the fact the core is a much more intricate chain of events.

Coming full circle back to the rectus abdominis (RA):

1. Yes, one of its main functions is spinal flexion. But I generally don’t go out of my way to program more spinal flexion, via sit-ups and crunches with most of my clients (especially “computer guy” who sits in front of a computer all day in flexion).

The catch-22 is that many of these same clients are rocking significant anterior pelvic tilt in addition to a flared rib cage (via lower ribs sticking out) which doesn’t bode well for ideal alignment and leads to a cascade effect of faulty diaphragm mechanics, breathing patterns, as well as a metric shit-storm of PRI (Postural Restoration Institute) stink eyes.

In this context training the RA to control rib position (ribs down) is very important. We need to train them (along with the external obliques) to contract isometrically to resist extension of the thoraco-lumbar region.

In other words, as Mike Robertson notes: “We need to teach our upper abs to control our rib position so that we can maintain optimal alignment of the rib cage during exercise and daily life.”

Walking around in a “flared” rib position in concert with an excessive anterior pelvic tilt is a one-way ticket to Mybackhatesmeville, USA.

Case in point, here’s an example of what I mean: Now, I’m am NOT insinuating you need to walk around all day “checking” yourself, making sure your abs and glutes are engaged, but I am saying it’s something that should enter the equation. And we can help address it by training the RA.

Two exercises or drills that fit the bill are:

See what I mean?

We can’t be so “concrete” in our thought processes when it comes to core training. I could sit here and wax poetic on how I feel the lats are an often under-appreciated core muscle (learning to engage them to a higher degree while lifting heavy things works wonders with regards to spinal stability and performance).

Or that building bigger, stronger glutes would make for a better use of training time than any of those silly 30-minute ab blaster classes people take…but I’ve talked long enough.

If I may, let me introduce you to something…. 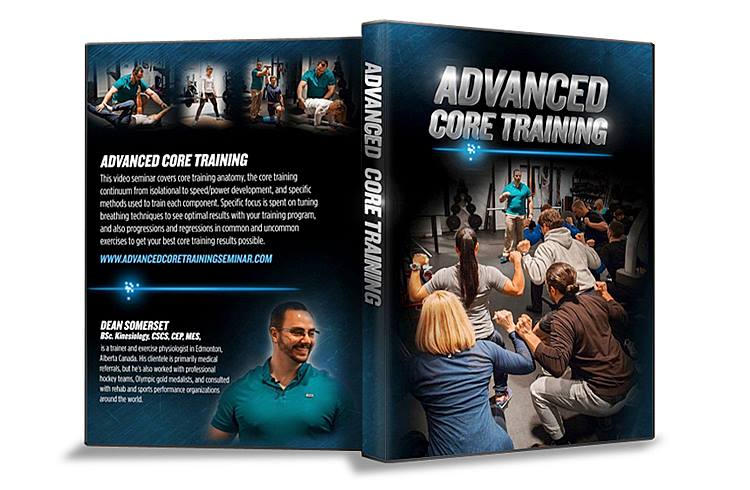 My good friend, Dean Somerset, just released is latest resource, Advanced Core Training, and it’s something that covers traditional core training as well as a bunch of voodoo theory stuff that will make your face melt.

In it you’ll find:

Those of you who were fans of his Ruthless Mobility series will find the material here a nice adjunct/sequel.

And if that’s not enticing enough: it’s on SALE at 40% off regular price this week, and you can earn continuing education credits too.

Check it out HERE. You won’t be disappointed. Dean’s wicked smaht.

Fair warning: This will not be an all-encompassing post on how to train the shoulders or how to program around nagging shoulder injuries. Frankly, I don’t think anyone wants to read a Dostoyevsky length diatribe on shoulder impingement or how improving scapular upward rotation leaves me sexually aroused. Yep, I’m weird. Instead I want to give… END_OF_DOCUMENT_TOKEN_TO_BE_REPLACED