Why I Dislike the American Kettlebell Swing

To any overly patriotic or political zealots out there who may have misread, note the title does not say “Why I dislike America.”

To everyone else, notice too that the title doesn’t say “I hate the American kettlebell swing.”

Oh, and side walk solicitors.1

No, I dislike it. Or maybe, “mildly need to resist the urge to jump through a glass door whenever I see it done.”

I’ll explain why below.

It first may be prudent to get some particulars out of the way. Like, for instance, explaining what a kettlebell is in the first place?

Well, that’s what’s Wikipedia is for:

The kettlebell or girya is a cast-iron or cast steel weight used to perform ballistic exercises that combine cardiovascular, strength and flexibility training. They are also the primary equipment used in the weight lifting sport of girevoy sport. Russian kettlebells are traditionally measured in weight by pood, which (rounded to metric units) is defined as 16 kilograms (35 lb).

In other words: it’s one of those “cannonball with a handle” looking thingamajigs that you see all those people at your gym pushing, pulling, hoisting, and tossing every which way in an effort to 1) perform a legitimate exercise such as a swing, get-up, snatch, clean & press, Farmer carry, amongst many, many others 2) perform an exercise that makes absolutely no sense for its intended design and/or use.

Although, giving credit where it’s due, this is kind of badass. Albeit from a cost-benefit standpoint I see little upside.

Kettlebells are a very useful piece of equipment, a piece of equipment I use often with my own athletes and clients, but I do find some people take an elitist attitude towards them to the point where things like barbells and dumbbells are considered obsolete or inferior (which I feel is an absurd stance to take).

It’s a minority take, but a take nonetheless.

Splitting the conversation further is the swing; one of, if not the most popular exercise performed with a kettlebell. I’ve written several articles in the past expounding my take/approach to the swing and I’m not going to belabor my point(s) here. If interested you can peruse THIS, THIS, and THIS article. We can high-five later.

All the coaches/peeps mentioned above advocate the “Russian” style swing as opposed to the “American” style. To which I say, “Samsies.”

American Style = more ROM, because, why not? And, America!

There are adamant supporters in both camps, and both make solid cases for why their style is the style everyone should be using.

And, as far as internet pissing contests are concerned, it’s an “argument” that ranks right up there with the low bar squatters vs. high bar squatters, steady state cardio vs. HIIT cardio, meat eaters vs. vegetarians, and you better bet your ass this calls for a Rocky vs. Drago reference. 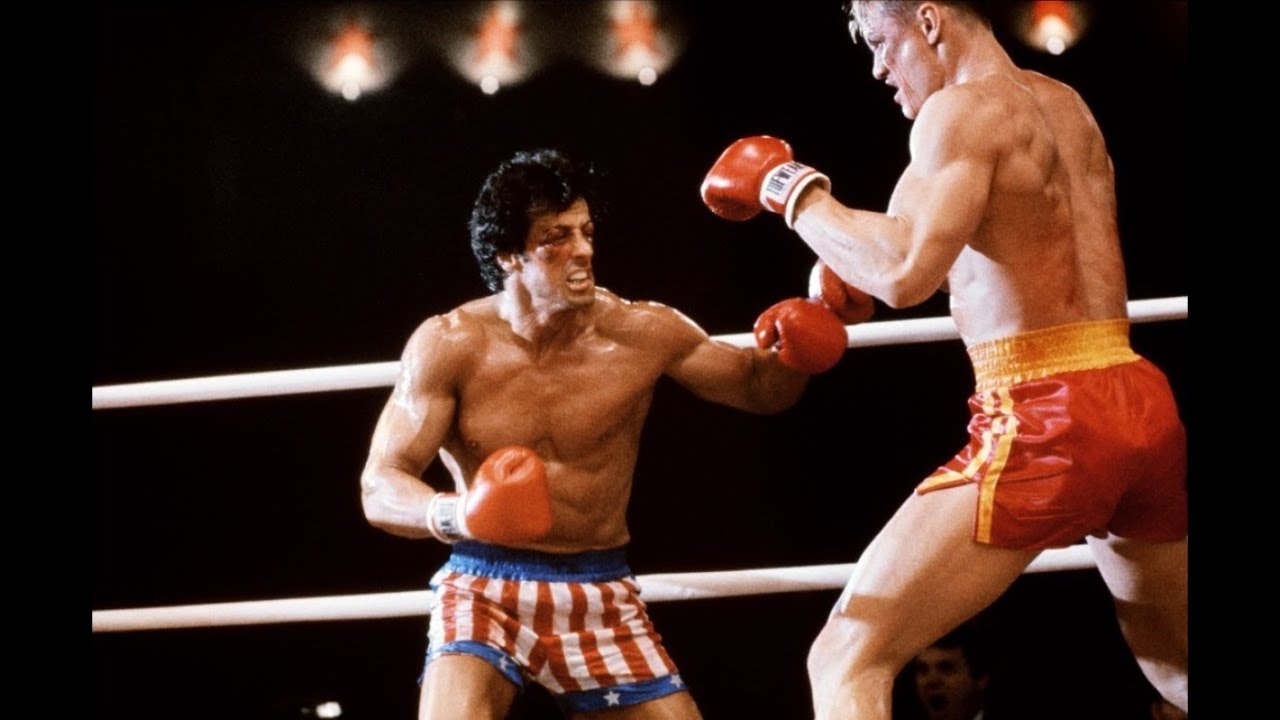 I have to say, though, the “American” advocates have a far less stellar rationale (it’s just my opinion of course) for their style.

Let’s discuss shall we?

My Case Against the American Style Swing

Little Help: can anyone provide benefits/advantages for the “American” KB swing?

I received this well-thought out response (which made me chuckle):

However the bulk of responses fell in the line with:

“To practice the movement for CrossFit competition. Sport specific practice, in essence.”

“It is measurable in the context of the bell has to be fully extended overhead to be a rep is the only thing I can think of.”

CrossFit competitions are one thing (and even then, why?). Where I feel things get dicey are for those CrossFitters who don’t compete and when personal trainers/coaches start using the American style with their regular clientele who, again, don’t compete and more importantly, have poor movement quality…all because they watched the wrong YouTube video, or Jillian Michaels DVD.

Mind you, there are plenty (not a lot) of people who can perform an American style swing and not make my corneas bleed.

It’s a learned skill just like any other exercise – with a right way and wrong way to do it (I think) – and I’m sure it’s not too hard to find passable images on Google.

However, lets not kid ourselves…most people who do it end up looking like this: 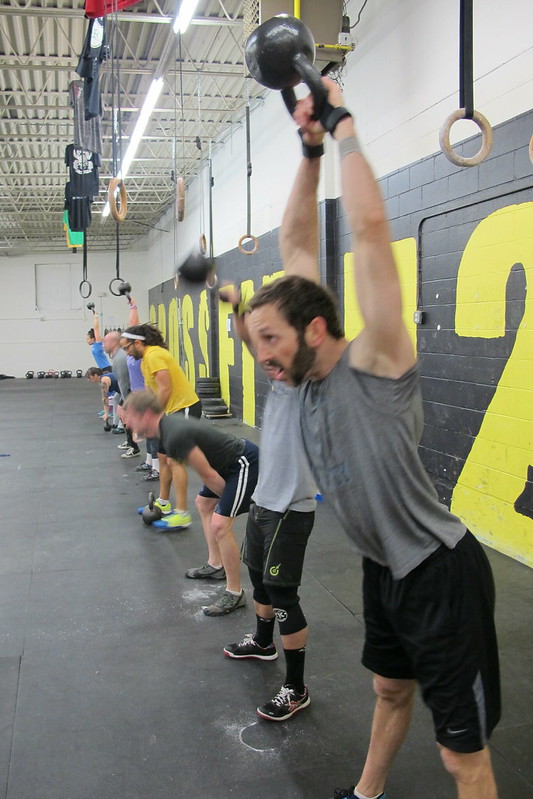 Maybe it’s the cynical coach in me speaking, but all I see is forward head posture, excessive lumbar extension (both primarily compensation patterns for limited shoulder flexion mobility; or the ability to get your arms over your head, and lack of lumbo-pelvic-hip control; or limited anterior core strength/stiffness), and a local physical therapist salivating.

And who knows: maybe the pics taken above were rep # 117 of a WOD, where technique is bound to take a hit. Either way, my back hurts looking at it.

I am not at all against people training overhead.

I just feel the vast majority of people need to earn the right to do it.

(Check THIS out for more details on that front).

Many people just don’t have ample enough shoulder flexion and/or lumbo-pelvic control to get their arms overhead without blatant compensations and (potentially) serious ramifications down the road – much less be competent enough to add load and repetitions (unfortunately, usually both).

Someone was kind enough to link to THIS article on Twitter written by CrossFit serving as a rebuttal to everyone else’s rebuttal that, for 90% of people 90% of the time, the American swing, and I’m paraphrasing here, fucking stupid.2.

See! An example of a better, “passable” American swing where the hips get through into more terminal extension. Understandably the criteria for a CF competition isn’t to get the hips through, it’s just whether or not the arms get overhead.

From the article itself:

“On first being introduced to the kettlebell swing our immediate response was, “Why not go overhead?” Generally, we endeavor, somewhat reflexively, to lengthen the line of travel of any movement. Why? There are two reasons.

I’ve already pointed out my disdain for assuming everyone can train overhead. It’s just not true, and I applaud any CF box or affiliate who take the time to properly screen their clients beforehand to better ascertain who can and cannot perform movements overhead…safely.

I almost shit a kettlebell when I read that second paragraph.

First off, every gym does half rep everything. Walk into any gym, anywhere, and you’re bound to see people “cheating” their lifts. Some lifts warrant partial reps – block pulls, Anderson squats, board presses, etc. There’s a ton of efficacy for partial ROM lifts, typically to address a technique flaw or weakness in one of the “big 3.”

But I’m sorry, CrossFit isn’t anything special, needs to be held to the same litmus test, and recognize that people cheat their lifts just as much there as in any other gym (commercial, collegiate, private, or otherwise).

All of that comes down to coaching anyways.

Um, what the hell are kipping pull-ups then? They’re certainly not full- ROM. Puh-lease.

Here’s another doozy from the same article:

“From physics we know that the higher we lift something, and the more it weighs, the more “work” we are performing. Work is in fact equal to the weight lifted multiplied by the height we lift the object. Work performed divided by the time to completion is equal to the average “power” expressed in the effort.

When we swing the kettlebell to overhead, the American swing, we nearly double the range of motion compared to the Russian swing and thereby double the work done each stroke.”

Who says you have to increase ROM (and do more work) to make an exercise better? It’s the American way I suppose. We work more, take less vacation, and are otherwise stressed to the gills because we’re a-holes like that.

With the swing – as with more conventional exercises like the bench press, squat, and deadlift – it’s not (always) about how much more work you can do (by increasing ROM) to make it better or harder or more effective. With the latter examples it’s about doing LESS work to improve efficiency and to take better advantage of one’s unique anatomy and leverages.

This is why many coaches advocate a low-bar position when squatting or why we tinker with deadlifting style to get the hips closer (laterally speaking) to the bar. Some do better with conventional deadlifts while others do better with Sumo. It depends.

Lastly, with regards to the American swing being more “powerful” compared to the Russian style I’ll defer to THIS excellent post by Mike Young on why that’s not the case.

I’ve also seen it argued that the American swing produces more force due to the increase in ROM. Sorry, but force output is more about forward motion, not up (the bell actually slows down the higher you go).

Not to mention – from a personal standpoint – I feel there’s more room for error with the American style swing. Taking compensation patterns and physical limitations out of the discussion, the increased ROM often lends itself to the bell traveling well below the knees for most people, which can lead to much more “stress” to the lumbar spine – something I’d like to avoid altogether.

Although the KB snatch is very similar, so I guess the real culprit is one’s ability to “clear” the hips and get overhead.

Additionally, I’ve heard stories of people losing the bell overhead, where it ends up flipping over and the bell falls.

This is not an attack on CrossFit or any coach who uses this particular style – relax. Far be it from me to tell any coach what he or she should be doing with their clients. If they want to coach their swings American style, have at it. They have their reasons.

It’s also not about pandering to which style is right or wrong. However I do feel the Russian style is more optimal and a better fit for most people. Why fix what isn’t broken?

All of this is my opinion – one it’s hopefully coming across in a respectful, “huh, that makes sense” kind of way – and as with anything in this industry the right answer as to whether or not the American style swing is a good fit for you is…it depends.

It depends if you compete in CrossFit. If so, I get it. I guess.

It also depends on whether or not you have the requisite shoulder flexion and anterior core stability to go overhead. Most people don’t.

It also depends on the cost-benefit. I argue there’s little upside to performing it. It does make your METCON finisher look more hardcore. Yay?

Fair warning: This will not be an all-encompassing post on how to train the shoulders or how to program around nagging shoulder injuries. Frankly, I don’t think anyone wants to read a Dostoyevsky length diatribe on shoulder impingement or how improving scapular upward rotation leaves me sexually aroused. Yep, I’m weird. Instead I want to give… END_OF_DOCUMENT_TOKEN_TO_BE_REPLACED