1. Isn’t it amazing how there is like a five week build-up to Christmas, and then it’s over in like ten minutes? Always bums be me out. In any case, I hope everyone had a wonderful time with their families. And, more importantly, I hope Santa was good to you. He was certainly good to me to say the least!

I drove to Albany Christmas Eve and stayed with my sister and her family. I woke up Christmas morning and beat my niece and nephew (4 and 7, respectively) down the stairs to see what Santa brought us. Here’s me running into the living room:

2. Brian St. Pierre wrote a really interesting blog last week titled, The Case Against Conventional Dairy. While I’m not quite as adamant against dairy as Brian (although he is very convincing), I will say that after reading The Vitamin D Cure a few months ago, I have made it a point to decrease some of my dairy consumption; particularly in the form of cheese.

In any case, I highly encourage you to read Brian’s post. I think he brings up a lot of valid points, not to mention he’s also going to get a lot of hate mail this week. Nice work Brian. High five!

3. Speaking of stuff to read:

Advances in Functional Training – highlights many of Mike Boyle’s training concepts and techniques he’s adapted since his first book (Functional Training for Sport). There aren’t many people who have influenced me as much as Coach Boyle, and you’d be hard pressed to find anyone in the field of strength and conditioning who has done more in terms of creating healthy athletes who perform at a high level than he.

What’s more, one of the things that I admire most about Coach Boyle is the fact that he’s not scared to admit when he’s wrong, and he’s open to change; a rare attribute to have in an industry filled with ginormous egos and bravado. In short, this book is basically what he’s changed in the past few years in terms of training philosophy, programming, injury prevention, and corrective exercise, to name a few. 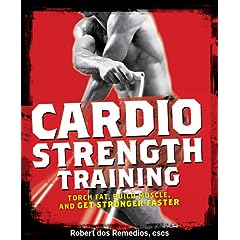 In this book, Coach Remedios does exactly what the titles implies- torch body fat, build muscle, and get stronger faster using complexes, circuits, and other stuff that will undoubtedly leave you asking the question, “why in the hell am I doing this?”

4. Here’s my attempt at a little conventional wisdom. I had one of my online clients e-mail me the other day expressing concern over the fact that his deadlifts felt like, for lack of a better term, shit.

He noted, rightfully so, that he hadn’t done conventional deadlifts for a while, but was still perplexed nonetheless.

Also, the fact that you had to lower your weight makes sense. As you noted, you haven’t done conventional deadlifting in a while, so it makes sense that you’d have to lower the weight. As well, even I don’t always increase my weights every time I deadlift.

I mean, the other day I was doing trap bar deadlifts, and all I did was 405 for 5×5 (I normally go in the 480-515 range for this). Point is, you don’t ALWAYS need to break PR’s every week. Sometimes it’s just a matter of getting quality reps in. Even Eric (Cressey) does this. The guy can pull 600+ when he wants, and I saw him doing 405 for reps the other day. Just because you can pull a shit-ton, doesn’t mean you have to.

Granted, the more “advanced” you are, the less you need to do to get the desired effect (specifically with regards to overall volume), but it just goes to show that you don’t need to go balls to the wall every session. Know what I mean? You’re not going to have your A-game every day; nor should you. There’s something to be said about just getting your reps in and calling it a day.

To summarize, you can’t be a hero all the time. As I type these words on my keyboard I am aboard an Irish Rail train en route to Galway. We just spent the past five days in Dublin being tourists making the typical pit stops at sites like Trinity College, the Temple Bar neighborhood, and I even had a Guinness at the renowned Gravity Bar… END_OF_DOCUMENT_TOKEN_TO_BE_REPLACED I had the lovely opportunity to be invited onto the Fitness Pain Free Show hosted by my man Dan Pope recently. Dan and I have known each other for several years (the facility he works out of, Champion Physical Therapy & Performance, is located about 20 minutes away from my training studio in Boston) and… END_OF_DOCUMENT_TOKEN_TO_BE_REPLACED