What a Glass of Wine Can Tell You About Training Environment

A few months ago, my girlfriend and I attended the company Christmas party where she’s currently interning.  Like the good boyfriend that I am, I got all dressed up, shaved my head, put on some cologne, and even made sure the color of my shoes matched my belt.  You could say I stepped my game up.

The night was par for the course – filled with introductions to her colleagues, a few courtesy laughs here and there, and an impromptu skull session on the importance of wine and the type of glass you drink it in.

Long story short, one of the big wigs sat at the same table as us – great guy; very amicable, engaging, and clearly a bit tipsy.  Anyhoo, at some point during the evening we (and by “we” what I really mean is I was just listening) got on the topic of wine – the different kinds, how it’s made, where it comes from, how you store it, and even the types of glasses you drink it in.

Cleary I was out of my element, because this was all news to me.   Then again, I think Applebee’s is a fancy place to eat, so there you go.

Now, I don’t drink wine – but if I did, I wouldn’t care what it was served in.  Give me an empty pickle jar for all I care.  All the same, it was really interesting to listen to this guy talk about all the intricicies that go into selecting the proper glassware for the type of wine you’re drinking.

Thing is:  It’s total bullshit.  In his phenomenal book, Predictably Irrational, Dan Ariely discusses the notion that it makes absolutely no difference what shape (or type) of glass you drink your white wine in – it’s still going to taste the same whether it’s served in a tall glass or a short glass, or whatever type of glass white wine is supposed to be served in.   According to Dr. Ariely, research proves it. 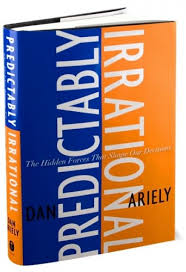 Nonetheless, it’s interesting to note that wine is perceived to be more “pleasant” (and as a result, more expensive) when it’s served in high(er) end wine glasses; that is to say, glasses carefully and strategically designed to presumably bring out the wine’s full aroma and texture.

In other words, you can take a bottle of two buck Chuck from Trader Joe’s, serve it in really expensive wine glasses, and people will automatically assume that they’re drinking an expensive Cabernet Sauvignon. They’re surroundings influenced their overall experience – in a positive way, no less.  Pretty cool trick if you ask me.

So, by now you’re probably wondering what’s my point with all of this?  Well, I was talking with one of our clients, Chris P, at the facility the other day, and he brought up an interesting point that parallels the discussion above.  Namely, the notion that what makes Cressey Performance so successful is the fact that people are surrounded (and influenced) by other people doing things RIGHT!

When he’s not training at CP three times per week, Chris uses a local commercial gym closer to his home.  He watches, first-hand, people just go through the motions.

He notices how many of the members always use the same machines; how most will be watching more television than actually training.  He also watches how people rarely (if ever) squat or deadlift, or perform chin-ups; or do anything remotely hard for that matter.    People rarely change – they look the same now as they did two years ago.  There’s no one to really influence them to do otherwise.

Conversely, at CP, it’s the exact opposite.  People are pushing one another; everyone is either squatting (to depth), deadlifting (without rounding their back), performing single leg work, doing heavy push-ups, throwing med balls (and breaking them), pushing the Prowler (and hating life), hitting tires with the sledgehammer, and just being badasses in general.  Their environment influences them to do so.

As much as we can easily be influenced by what type of glass we drink our wine from, so to can we be influenced by our training environment.  Simply put – if you surround yourself with people who think bicep day and Bikram yoga is “working out,” good luck trying to take your body to the next level.  How’s that for an analogy?

Fair warning: This will not be an all-encompassing post on how to train the shoulders or how to program around nagging shoulder injuries. Frankly, I don’t think anyone wants to read a Dostoyevsky length diatribe on shoulder impingement or how improving scapular upward rotation leaves me sexually aroused. Yep, I’m weird. Instead I want to give… END_OF_DOCUMENT_TOKEN_TO_BE_REPLACED