My Top Three Metabolic Protocols For People With Knee Pain

Before I get into my three favorite metabolic protocols for people with bum knees, I have a very important announcement to make.  No, it has nothing to do with a cannonball (ALA:  Will Ferrell, in the movie Anchorman).

Actually, the truth is, my girlfriend and I signed a lease earlier this week, which makes it official:  we’re moving in together.  Yay for co-habitation!!!

Note to Lisa:  Just a heads up babe – I pee in the shower.

Anyways, it’s a big step for sure, but it’s something that we’ve been discussing for a while now.  We found a ginormous apartment in an area that we love in the city, and we’re really excited to make it ours.

The move in date is in less than a month, which means, among other things, I need to go through my t-shirt drawer and decide which ones I want to take with me.  You could say that collecting vintage t-shirts is a hobby of mine, and while some (Cobra Commander) I’m going to keep forever, others are so old and crusty that I could probably walk over to the local nursing home and donate them as penicillin.  HA!  Get it?

So, that said, if any of you have any words of wisdom (or encouragement), please, feel free to chime in below.  I mean, now that we’re moving in together, Lisa is pretty much obligated to make me ham sandwiches everyday, right?  Right?

Okay, enough with beating around the bush – lets get down to business.  Now, if you’ve been reading this blog for any length of time, it’s no secret that even though I’m 34 years old, I have knees that are seemingly older than Gandalf.  Zing!  Count it!  Man, I’m on fire today!

As such, while I’m still able to hit my lower body pretty hard, I still have to be careful when it comes to things like squatting (consistently), sprinting, and any other modality that puts a lot of stress on the knees.

Now, before I go on, let me be perfectly clear: despite what a lot of people say – you can ALWAYS train around an injury.  I won’t belabor the point – especially since I wrote on the topic already, HERE – but suffice it to say, while I definitely have to tweak my programming accordingly (not to mention stay on point with things like foam rolling and other soft tissue modalities), I still feel I’m able to get a great training effect and maintain (if not improve) my overall strength and conditioning levels following a few basic tweaks – seen below.

As the title above suggested, today, I want to focus more on the metabolic or conditioning side of things – because, lets me honest, when you have cranky knees, doing anything more than a light jog (or even walking) can oftentimes be problematic.

Here are my top three metabolic protocols in no particular order.  And, as it so happens – there’s no smoke and mirrors involved.

I’d argue that no one piece of equipment (other than the Prowler) is despised more in our facility than the airdyne bike.

When it comes to interval or metabolic training, not many pieces of equipment can trump the full body effect that the airdyne bike has on the body; which is why I like to follow what’s called the 180 Rule.  Which is this:  whatever you see the vast majority of people using in the gym (elliptical trainers, for example), do the exact opposite.  In layman’s terms, the equipment that no one ever uses tends to be the ones that are the most useful.

See that airdyne that’s tucked over there in the corner of the gym that you thought was part of an antique exhibit?  Yeah, you should use it.

People don’t use them because they’re hard, and they’re not fun (and coincidentally, they don’t have a flat screen television attached to them either).

While you can certainly keep things easy and just follow a simple 1:2 or 1:3 (work: rest) ratio – something like 15s of work, followed by 45s rest for a certain amount of time (say 10 minutes) – I like to kick things up a notch and follow a protocol popularized by Christian Thibaudeau:

Cool down for 5 minutes, and allot some time to catch your breath.

And yes, if you don’t have access to an airdyne bike, you can still use a regular bike here.  The only thing you need to be cognizant of is that you must make sure to increase the resistance on the sprints, and lower the resistance during rest intervals.  And clean up your pool of sweat, you jerk! 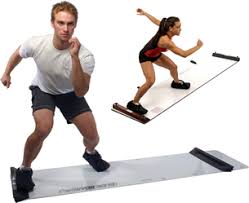 I’ll be honest here and say that there was a time where I felt the slideboard was a foo-foo piece of equipment that I would NEVER use.  Then, I actually took my head out of my ass, started listening to people like Mike Boyle (who expounds on their efficacy religiously), and finally started seeing just how valuable and versatile they can be.

The slideboard may be the best, most cost effective conditioning mode available for athletes exclusive of actually running (which for those with bum knees, ain’t gonna happen).

Taking a page from Boyle, the slideboard offers the following:

What’s more, it’s a VERY joint friendly modality to use when someone suffers from knee pain.  Moreover, think about how we generally train as a society:  we tend to be VERY linear with our movements, doing things in a straight line all……….the………freakin………time.  With the slideboard, however, we can now train lateral (side-to-side) movement, which undoubtedly is an important component of any well-rounded program.

Keeping things simple, I prefer to use standard work: rest ratios here.  Meaning, one would basically slide for 20-30 seconds, rest of 60-90 (or longer) seconds, and repeat for a required amount of time.

My friend Nia Shanks is going to love this, since she’s ALWAYS telling people how running hill sprints is the bees knees.

I have to say, I kinda agree.

Now that the weather is nicer here in Boston, every Sunday my girlfriend and I head over to Harvard University and run sprints up the football stadium.  Here’s me doing my last sprint last weekend: Sprint Up (or walk briskly, depending on current fitness level)
Walk Down
Repeat
Hate Life

Because there’s very little (or less) stress on the knees running up stairs (or a hill), this is a fantastic modality for those with knee issues.  But, in reality, it’s a phenomenal workout regardless, and I defy anyone to argue otherwise.

So, there you have it – my top three metabolic protocols for people with knee pain.  While it’s definitely not an exhaustive list by any stretch of the imagination, I feel that these are the three that can most easily be implemented by most people given equipment availability.  Have one to share?  Let er rip below!

People are often surprised when I state I’m an introvert. Confessions of an Introverted Strength Coach What most people fail to recognize is that “being an introvert” is part of a spectrum. No one is 100% introverted, nor are they 100% extroverted. Everyone’s a little of both. Another common misconception is that introversion is somehow… END_OF_DOCUMENT_TOKEN_TO_BE_REPLACED