For most of the week, I, along with many other coaches who’s blogs and websites you probably frequent have been going on and on and on about how Show and Go is on sale this week.  By now it probably sounds like this:

I get it, and I’m sorry.  But the truth of the matter is, you’d be a fool not to take advantage of such an awesome offer.  And, even more to the point, I’d like to think that I’ve established enough of a rapport with my readership that you know I’m not just blowing sunshine up your bum.  I know a good program/product when I see it (nightlights, anyone?), and I’d like to think that anything I’ve gone out of my way to promote or even talk about on this blog is something that I know will help out a lot of people.

To that end, because I’m about five minutes away from training (and at the expense of sounding like a broken record), here are some quick bullet points on why you should purchase Show and Go.

This isn’t some globo-gym, new-haircut, curling-in-the-squat-rack, personal trainer here.  I mean, Eric  has his name on a t-shirt for crying out loud, so he obviously knows what he’s talking about.

Seriously, though, Eric places a lot of time and effort into his programs, and I’ve seen firsthand just how many people have succeeded following his guidance.

Of course, as is the case with ANY program, you get out what you put in.  But I assure you, if you follow Show and Go to a “t”, and put every ounce of effort you have into it, you’ll be rewarded handsomely. 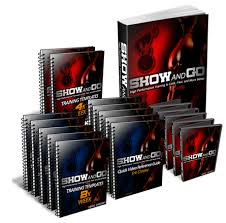 There’s just something about someone else telling you what to do that will hold you more accountable.  When it’s written for you, you’re more apt to actually do it.

In the past, I’ve written about how many trainees tend to flip flip back and forth between programs and then wonder why their bench press is the same now as it was two years ago.  Even worse still, many will just meander around the weight room with no rhyme or reason, doing a few reps of this, and a couple sets of that.  It’s training ADD at its worst – there’s no sense of purpose behind their training.  Show and Go definitely holds people to a higher standard.

3.  Stepping Outside Your Comfort Zone

People tend to do what they’re good at and what’s easy, which is why many tend to tread water when it comes to actually making any significant progress with their training.  Show and Go challenges people to step outside their comfort zone, which is something I feel is the “x-factor” of why many people never improve on anything.

4.  You Get to Lift Heavy Things

And as such, make others watching destroy the back of their pants.  What’s cooler than that?

5.  You Will Be More Awesomer At the End Than At the Beginning

Whether your goal is to increase your bench press, not have the movement quality of the Tin Man, or just achieving general badassery, Show and Go is the real deal.

And I’m Done (for real this time)

And yes, my offer still stands.  Anyone who purchases Show and Go (link below), and sends their receipt to my email address (tgentilcore18@yahoo.com), will be entered into a drawing for either a free copy of Muscle Imbalances Revealed – Upper Body or one month of individualized programming from some guy named Gentilcore.

Hello, hello! I know. It’s not lost on me that I’ve been an abject failure on the “writing new content” side of things. If it’s any consolation I’ve also been lackluster on a few fronts: Calling my mom. Avoiding pizza. Not (not) being jacked. Hugs. My free time has been monopolized by what can only… END_OF_DOCUMENT_TOKEN_TO_BE_REPLACED

My good friend and colleague, Gavin McHale, is back with another excellent guest post today. He’s been on a tear of late writing some stellar content for this site. We’re all our own worst enemy, and for many, stepping outside our comfort zones and taking risks (calculated or not) in an attempt to grow our… END_OF_DOCUMENT_TOKEN_TO_BE_REPLACED