Oh yes ladies and gents, you read that correctly:  Eric Cressey’s best selling product, Show and Go:  High Performance Training To Look, Feel, and Move Better is on sale from now until midnight Friday, October 28, for 50% off the original price.  For those mathematically challenged, that’s half off.  If you don’t believe me, just click HERE.

Now, for some, you may be wondering to yourself “why?”  Well, why not?  Why is the sky blue?  Why is water wet?  Why do people listen to Coldplay?  Okay, that’s actually a really good question.  But, outside of that, don’t ask questions, just go with it!

Eric will tell you it’s because the World Series is kicking into high-gear, and he just wants to tell people how much he appreciates their support and readership.  Both are undoubtedly great reasons.  I say it’s because my 35th birthday is right around the corner (ahem, November 30th), and he’s just jealous that I have less hair than he does.

Okay, that’s wishful thinking on my part.  In actuality, and this is something that he and I have discussed on numerous occasions,  Show and Go is about as close as you can get to experiencing Cressey Performance without actually setting foot inside the facility itself.  In short, if you can’t train at a gym with some attitude, you can at least bring the attitude to your gym!

More to the point, though, is the fact that, as someone who’s been BFF with EC for quite some time (not to mention we’re business partners), I know how much time and effort he puts into writing his programs.  All told, he spent roughly a full year tweaking the entire program before he actually released it the first time through.

And, speaking frankly, the bulk of programs you’ll find on the internet are utter garbage.  In a time where any joker with a laptop and digital camera can claim himself to be a world renown coach, and as such, a program writing ninja, talk is cheap.   How many of those same gurus actually train ANYONE in person – let alone upwards of 70+ professional athletes during one off-season? 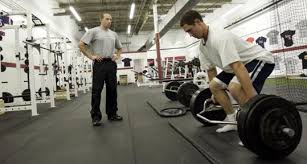 Trust me:  I’ve seen my fair share of these so-called “programs,” and to say that a ham sandwich could come up with something better would be an understatement.

Moreover, almost unequivocally, I can say that I have yet to hear about anyone NOT making drastic improvements in their strength, athletic performance, movement quality, and/or physique completing Show and Go in its entirety.  Literally, Eric has hundreds (if not thousands) of emails and testimonials to back it up.   How many of the aforementioned internet gurus can claim that?

Summing up, Eric has some pretty sweet bonuses in store for those who act quickly (namely, a free LIVE Q and A for those who purchase within the first 24 hours), so be sure to take advantage as soon as you can.

To help sweeten the deal, however, I’m going to toss in some incentive too.

For starters you need to purchase Show and Go HERE.

Secondly, email your receipt to tgentilcore18@yahoo.com, and I’ll enter you into a drawing to win one of the following:

Fair warning: This will not be an all-encompassing post on how to train the shoulders or how to program around nagging shoulder injuries. Frankly, I don’t think anyone wants to read a Dostoyevsky length diatribe on shoulder impingement or how improving scapular upward rotation leaves me sexually aroused. Yep, I’m weird. Instead I want to give… END_OF_DOCUMENT_TOKEN_TO_BE_REPLACED