In case you weren’t picking up on my vibe, today’s my birthday, soooooooo, I automatically get a mulligan for taking so long to get this post up today.

I took a personal day off from CP, and as a result I slept in, made a ginormous omelet, opened up my presents, answered some emails, wrote a few programs, dropped Lisa off at work, helped a little old lady cross the street, read scripture to a bunch of orphans, fought crime, and now I’m sitting here writing at a local coffee shop chillaxing.

I’ll hang out here for a while, and then head back to pick Lisa up whereupon she’s treating me to an all-you-can-eat-meat-buffet-extravaganza.

I contemplated not writing a post today, but thought better of it since I took most of last week off due to Thanksgiving/marathon football watching.  And, even more importantly, I didn’t want to leave my loyal readers feeling shafted that I haven’t been a blog writing ninja lately.

I don’t know if it’s something in the water or what, but lately I’ve been receiving a lot of inquiries about my thoughts on weight belts.  Namely, whether or not I feel there’s any efficacy for their use, and if so, when?

As is the case with any question pertaining to fitness, the answer is:

For most, here’s where I see a belt’s use coming to fruition:

1.  They have observed others wearing them and have come to the conclusion that it will be a good idea for them to do so as well.

2.  Their back has an ouchie, and they believe that a weight belt with help alleviate the problem.

3.  They think it will make them invincible and chicks will want to hang out with them.

Sure, there’s a lot of research proving the usefulness of weight belts in increasing intra-abdominal pressure, as well as improving performance: go to Pubmed and do a search, or better yet, go to page 174 of McGill’s Ultimate Back Fitness and Performance, where he uses an entire chapter discussing this topic.

Here’s the rub, though. I feel many trainees tend to get carried away and tend to rely on a weight belt as crutch. Looking at the anatomy, you’ll realize that your body has it’s own natural weight belt already in place.

Anteriorly:  rectus abdomimus (or your abz, in bro-science talk).

Posteriorly:  erector spinae, multifidus (segmental stability), longissimus, iliocostalis, and we can even throw the lats into the mix here.

And, digging a little deeper, we can’t neglect the roles of the transverse abdominus, diaphragm, and pelvic floor with regards to core function (with both stability AND performance).

Assuming one is perfectly healthy, and doesn’t have a history of back issues, one could argue there’s no immediate use for a weight belt, and that our body does a pretty darn good job on its own!

Note:  this is taking into consideration that, despite many people being asymptomatic, MRI’s have shown 52% of people walking around have a bulge at one level; 38% have bulges at TWO levels. In short, just because you’re pain free, doesn’t mean you’re entirely in the clear.

But that’s a discussion for another day.

Stealing a section from an article I read by Dave Kirschen on this same topic:

I tend to think of a belt as a performance enhancer rather than protection. If you are lifting correctly, your midsection should be strong enough to support itself through the vast majority of tasks you put it through. You may be limited in how much weight you can lift, but you are not in any significant danger of injury without it. The belt really comes into play when you need the extra support to get after heavy weights.

Outside of some heavy, I’m going to shit my spine lifting (we’re talking in the range of 90% + of one’s 1RM), weight belts, in my opinion, are less than optimal.

As mentioned above, belts do help to improve intra-abdominal pressure, as well as prevent buckling of the spine with heavier loads, but it’s just gotten to the point where dudes (and girls, too – you’re not off the hook!) wear belts for just about everything:  bicep curls, lat pulldowns, lunges, changing a light bulb, taking the garbage out, you name it.

It’s gotten out of hand.

Attacking the second point (your back has an ouchie, and a belt will help alleviate the problem) – again, I feel this is placing a band-aid over the real issue. Many trainees use weight belts as a crutch and fail to address the actual dysfunctions and imbalances they have.  In a way, by wearing a belt incessantly, they’re “shutting off” the surrounding musculature in terms of doing what they’re designed to do – protecting and stabilizing the spine.

This is actually a tough one to tackle, because there are obviously circumstances where a weight belt is advantageous and warranted.

As a general rule, however, most trainees would be better off taking a step back and addressing the issues at hand (unable to find, or even maintain, a neutral spine, having the t-spine mobility of the Tin Man, and hips that are stiffer than a 2×4, to name a few), rather than relying on a weight belt for everything.

And lastly, undressing the third point (they’ll feel invincible) – I’m not going to lie, there IS a sense of “comfort” and peace of mind that comes from wearing a belt; but again, unless you’re using loads upwards of 90% of your 1RM, you’re better off keeping the belt in your gym bag.

Which presents another question:

What Kind of Belt Should You Get?

Not all belts are created equal. At the expense of sounding like a broken record, a weight belt is mostly designed to help one increase intra-abdominal pressure, which in turn, stabilizes the ENTIRE mid-section. Belts that you can purchase at your local Wal-Mart that are skinny in the front and wide in the back are worthless, because they do a piss poor job at providing enough support for the entire system.

Remember that one time you decided to buy your cottage cheese from the dollar store because, well, it was a dollar? How did that work out? It probably tasted like sour butt crack, right? You get what you pay for. And purchasing a top-notch weight belt is no different.

I’d recommend heading over to elitefts.com and perusing their weight belt section. They’re not cheap, but they’re legit, and will last F.O.R.E.V.E.R.

UPDATE (March 2017): The peeps over at BarBend.com have done everyone a solid and started reviewing every weightbelt they can get their hands on. By the end of this year their goal is to have 40 or so of the top brands reviewed. You can check the list HERE.

Keeping that in mind, I’d be remiss if I didn’t take at least a few moments to discuss how to use a belt properly.

1.  Seriously, don’t wear one for every exercise!  Squats and deadlifts would be the staples. Others on the list would include goodmornings, HAS (Heavy As Shit) farmer carries, and competition bench presses. I’m sure I could think of more, but whatever.  The point is if you’re wearing a weight belt to perform tricep kickbacks, you’re tool. 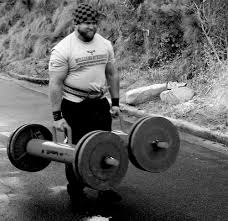 I’d recommend going belt-less for all of your warm-up and build-up sets. From there, once you reach roughly 90% of your 1RM, strap that baby on and dominate!

2. Mistakenly, many trainees tend to latch their belt on as tight as possible – to the point where they’re cutting off circulation. Again, the belt is there to help, but you also need to do some of the work. Instead, leave some wiggle room and latch the belt a little looser than usual. This way you’re forced to PUSH OUT against the belt and get more kinesthetic feedback.  Additionally, as a result, you’re teaching yourself to increase intra-abdominal pressure without relying too heavily on the belt.

I’m sure I’m missing some points, and I could expound on a few things in more detail, but I think you get the gist.  At the end of the day, I can just defer to Dr. McGill on the matter:

If one must lift a few more pounds, wear a belt. If one wants to groove motor patterns to train for other athletic tasks that demand a stable torso, it is probably better not to wear a belt.

What are YOUR thoughts?  Agree? Disagree? Don’t care? Sound off below.

Being human means being enamored by a litany of things in the health/wellness/physical preparation realm. Some people are easily swooned by fancy watches and elaborate looking exercises Others by cryochambers and Paleo recipes that taste like sawdust. I am not here to play judgement police. For the most part, everything has a time and place… END_OF_DOCUMENT_TOKEN_TO_BE_REPLACED

Back tweaks are an inevitability. They happen to people who lifts weights regularly, and those who just look at weights. They happen when doing something as inane as bending over to tie your shoes, as well as when you’re doing some less inane, like, fighting crime at night. They happen on a Wednesday. There’s no… END_OF_DOCUMENT_TOKEN_TO_BE_REPLACED