Is There a Fitness Double Standard?

On our first date we crushed fajitas.

But fitness and living a healthy lifestyle – whether it be heading to the gym to get our swole on, making a cameo at Harvard to do stadium sprints on a Sunday morning, hitting up various local farmer’s markets, or trying our best to avoid gluten like the plague – has always been a “theme” in our relationship.

Funnily enough, when we first met, Lisa wasn’t that much of a hardcore gym rat.  Sure, she would go to the gym and do her thing following various routines she’d read about or come across in books or magazines, but more often than not the one’s she’d follow had the foo-foo body-part split, “Tone Your Abs in 17 Minutes,” or “Tighten Your Tush by Tuesday” vibe.

To her credit (and so that I don’t get the look of death from her after she reads this), she grew up in a very active family and was always highly encouraged by her father to lift weights. In addition, she was a volleyball player all through high-school and college – even being inducted into her alma mater’s Athletic Hall of Fame, thank you very much – and as such, understood the importance that strength training had on her success as an athlete.

Even as a non-athlete after college, she carried with her the drive to be active and fit, and still made weight training a priority in her life moving on into adulthood.

When our paths crossed back in 2009, Lisa had already established herself as a very popular spin instructor in Boston (she still is) and she supplemented that with her training routine – which, admittedly, and at the risk of being sent to the doghouse tonight, resembled one of those foo-foo routines I mentioned above.

Well maybe that’s a bit of an exaggeration, but suffice it to say, she wasn’t routinely lifting heavy stuff…..;o)

Anyways, during my courting of her (you know, dates at Chipotle, Star Wars marathons, and me 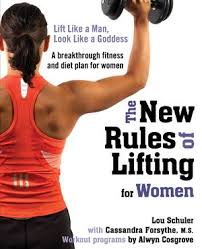 bringing her containers of protein powder instead of flowers – true story) I’d occasionally go to the gym with her and show her a few new exercises here and there.  I also had her read The New Rules of Lifting for Women, and just tried my best to support and educate her along the way.

Trust me:  this wasn’t a damsel in distress scenario by any stretch. Lisa knew her way around the gym floor – I just had to nudge her a little bit towards the squat rack and the deadlift platform.

Needless to say, I created a monster.

Not to brag or anything, but Lisa routinely deadlifts 1.5x her bodyweight for reps, can bench press 135 lbs for multiple reps, can perform multiple sets of unassisted chin-ups, and I’m pretty sure if she arm wrestled a tank, she’d win.

I write her programs on a monthly basis, and while she and I will sometimes butt heads (you’re going to do box squats and like it!!!!!!!!!!), it’s been fun to see her make so much progress and enjoy her training.

Because she follows a bit more of an unconventional program compared to most, she’s constantly getting questions from random people and remarks from trainers.

Most are just curious about a certain exercise she’s doing and wondering what muscles it targets, while others just stop to give her some praise – which is always cool, and Lisa is more than happy to stop and talk some shop.

But I can’t help but notice the massive double standard that exists.

For like the 18th time some random dude approached Lisa at the gym the other day in between sets of deadlifts and asked her what she’s training for.

“Are you training for some kind of sport or something? ” the man asked. To which she replied, “nope, just training for fun. What are YOU training for?”

I find it interesting that guys never ask other guys the same question. Well, it happens it’s just A LOT rarer.

Guy #1:  Hey dude, you’re pretty ripped.  What are you training for?

While the above example is a bit facetious, just think about it: when many of us see a ripped or jacked or yolked (or whatever brospeak verbiage you want to use here) dude getting after it in the gym we generally don’t think anything of it. He’s just training.

Yet, when many (men AND women) see a strong female lifting weights they automatically assume she’s training for a sport or some kind of figure show or something. I’d love to hear other’s thoughts on this.  Am I just over-analyzing, or do others notice the same thing?

Being human means being enamored by a litany of things in the health/wellness/physical preparation realm. Some people are easily swooned by fancy watches and elaborate looking exercises Others by cryochambers and Paleo recipes that taste like sawdust. I am not here to play judgement police. For the most part, everything has a time and place… END_OF_DOCUMENT_TOKEN_TO_BE_REPLACED

Back tweaks are an inevitability. They happen to people who lifts weights regularly, and those who just look at weights. They happen when doing something as inane as bending over to tie your shoes, as well as when you’re doing some less inane, like, fighting crime at night. They happen on a Wednesday. There’s no… END_OF_DOCUMENT_TOKEN_TO_BE_REPLACED