Everyone’s Goal for 2013: Train With a Purpose

Happy New Year everyone!!!  Hope you all had a fun, safe, and eventful New Years.  Lisa and I kept with our own tradition and spent our New Years in Boston’s historic North End eating bread with olive oil, pasta, and there might have been a few (dozen) pastries thrown into the mix.  Basically it was one ginormous gluten fest, and it was worth every calorie.

We were kind of rushed through dinner – we made reservations at 10 PM, hoping to be there when midnight hit – not knowing that the kitchen closed at 11.

So by 11:15, we have to make the executive decision to hop back on the “T,” pastries in tow, and head back to our apartment so that we could watch the fireworks on tv.  Low and behold the higher ups of the MBTA decided to take the train we were riding out of commission, and we were forced to get off and wait for the next one to arrive.

As the minutes passed with no train in sight, both Lisa and I were bummed that the likelihood that we’d be spending the first moments of 2013 on the train – and not in the comfort of our own living room – were more and more evident.

Alas, the train finally arrived and we were back in business.

We only live like five stops from the heart of the city, but when you ride the Green Line five stops can seem like an eternity.  At like 11:57, we were one stop away but decided to get off and spint – literally sprint – up the street to our apartment building.

Suffice it to say, we made it just in a nick of time, and right as I turned on the television Fergie was yelling HAPPY NEW YEAR!!!!!

We kissed, and more importantly wolfed down our goodies from the North End.  And, I think we were both dead asleep within the hour.  Yeah, you can say we’re pretty romantic….;o)

New Year’s day itself was pretty low-key, but that’s exactly what I wanted.  We closed the facility for the entire day which meant I was able to sleep in. Score!

After some basic food prep, we headed to a local Boston Sports Club for our first training session of 2013.  Fittingly, Lisa and I both benched pressed our asses off.  Why not, right?

She did some cluster sets with me, and afterwards, for the hell of it, I had her attempt a one-rep max.

The kicker is that while we were testing her 1RM, there was an older gentleman training at the bench press station next to us puttering around with 95 lbs.

Now, maybe that was challenging weight for him, who knows?  But I have a sneaky suspicion that it wasn’t.

As I looked around, I couldn’t help but notice the same kind of blase “hey-I’m-at-the-gym-so-it-has-to-count-for-something” attitude amongst many of the gym patrons.

Most looked like zombies just going through the motions. Some torso twists here, some arm circles there, and texting. Lots and lots of texting.  Why people can’t leave their iPhone’s in their locker is beyond me. 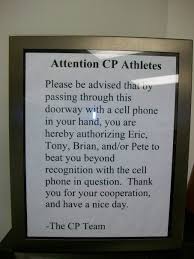 There was one guy, however, taking himself through some massive free-for-all circuit of god-knows what (and making guttural noises that can best be described as a grizzly bear getting raped by a rhinoceros), so I’ll give credit where it’s due.  My man was getting after it!

As a whole, though, pretty much everyone was just, you know……there.  As if that’s all that matters.

Sure, there’s a lot to be said about taking some initiative and making an effort to head to the gym – especially on New Year’s day. That should be commended, and as GI Joe would say “is half the battle.”

We all know the saying: the hardest part is showing up!

But there’s a lot more to “it” than just showing up.

Whatever “it” may be – for some it’s shedding off the Holiday weight gain.  For others it’s more specific like nailing a 2x bodyweight bench press – you can’t just expect things to magically happen because you walked through the doors.

There has to be some semblance of urgency or better yet, PURPOSE when you train.

Now, I’m not saying you have to go all CrossFit and train to the point where you cough up your appendix every training session. That serves no purpose.

But what I AM saying is that you should train with a purpose. Train with some balls!  Or, in the case of the ladies reading, with some fallopian tubes (because, you know, you don’t have balls).

Try to have a clear-cut, attainable, measurable goal to train for.  I don’t care what it is – I’m not here to state what that should be.  But if you’re lifting a weight for ten reps (and you could have easily gotten 20), or more to the point, you just meander around the gym floor with no rhyme or reason and just kind of “fake it till you make it,” you’re doing yourself a huge disservice.

So everyone’s goal for 2013 is to train with a purpose.

Try it – you might be surprised as to how much of a difference it can make.  And for the love of god, put away the phone!

Being human means being enamored by a litany of things in the health/wellness/physical preparation realm. Some people are easily swooned by fancy watches and elaborate looking exercises Others by cryochambers and Paleo recipes that taste like sawdust. I am not here to play judgement police. For the most part, everything has a time and place… END_OF_DOCUMENT_TOKEN_TO_BE_REPLACED

Back tweaks are an inevitability. They happen to people who lifts weights regularly, and those who just look at weights. They happen when doing something as inane as bending over to tie your shoes, as well as when you’re doing some less inane, like, fighting crime at night. They happen on a Wednesday. There’s no… END_OF_DOCUMENT_TOKEN_TO_BE_REPLACED