Sorry for the blatant profanity – but how else to describe what happened yesterday?

Like so many of you reading, I remember where I was when 9/11 went down.  I was actually in my microbiology lab class either fumbling with a bunsen burner or observing some paramecium colony under the microscope (I can’t remember which) when my professor walked in from the back room and said, “a plane has hit the World Trade Center.”

My lab partner, Connie, who was originally from Long Island and whose brother worked in the World Trade Center immediately jumped out of her seat in a panicked state and sprinted out of the room.  Not long afterwards the rest of the class – most of which were also from the NYC area – excused themselves from class in an effort to get hold of family members or friends to make sure that they were alright.

As it turned out: Connie’s brother made it out of the building safely.  Unfortunately, we all know that that wasn’t the case for so many others.

It was a sad day for all of us. It was a day that will forever be singed in our minds.  It fucking sucked.

Much like yesterday did.  But unlike the events of 9/11 (which I’m not downplaying in the least), what happened yesterday hit me in the stomach a tad harder because it took place in my back yard.  Well, two-miles from apartment, but still.

Thankfully, I wasn’t anywhere near the chaos. I was at Cressey Performance – roughly 20 miles west of Boston – when I happened to walk into the main office area and Pete just said, “dude, shit is going down in the city.  A few bombs went off near the finish line of the marathon.”

Knowing Lisa took the day off from work because her brother (of all days) was in town visiting from Texas, and knowing that the two of them had made plans to walk around the city to take in the sights and sounds of the marathon, I immediately grabbed my phone to make sure that she was alright.

She was.  In fact, she was at home the entire time.

I had a few friends who were in the vicinity of the blast(s), but again, no one I know on a first-hand basis was injured.

But that doesn’t mean I’m still not very disheartened and saddened by what happened.

Like everyone else part of me feels the fear and sadness, which makes sense.  But a larger part of me is also pissed as hell.  I guess the best way I can describe it is when someone makes fun of one of your siblings and you want nothing more than to rip that person’s head off.

I’m not originally from Boston, but in the almost seven years that I’ve called it “home,” where I’ve watched countless games at Fenway, spent endless hours reading in Boston Common, ate my fair share of cannolis in the North End, and walked the very sidewalks on Boylston St. where all the madness happened…..I’ve fallen in love with it.

And the fact that this happened so close infuriates me to no end. 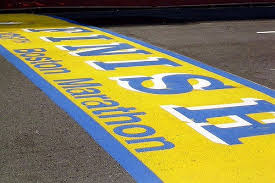 I know I’m not alone.  I know the entire country is just as mad.

More importantly, though, I can’t even begin to articulate how proud  and in awe I am of the random strangers and first repsonders who took it upon themselves to risk their own lives to help others in need.

By now we’ve all heard of the harrowing stories of people running TOWARDS the blasts to help.  Maybe even more telling are the stories that circulated of runners themselves streamlining it from the finish line straight to the hospitals so that they could donate blood on the spot.

I think actor and comedian Patton Oswalt might have stated it best in his Facebook status that has since gone viral:

So when you spot violence, or bigotry, or intolerance or fear or just garden-variety misogyny, hatred or ignorance, just look it in the eye and think, “The good outnumber you, and we always will.”

You can read the entire passage HERE.

Sometimes, maybe even more than we’d like, people go out of their way to suck.  But we can’t forget that the good far outweigh the bad.

Thanks for all the well-wishes and comments that people have sent my way the past 24 hours.  We’re all in this together, and it’s my hope we’ll all come through this a little bit stronger.

Back tweaks are an inevitability. They happen to people who lifts weights regularly, and those who just look at weights. They happen when doing something as inane as bending over to tie your shoes, as well as when you’re doing some less inane, like, fighting crime at night. They happen on a Wednesday. There’s no… END_OF_DOCUMENT_TOKEN_TO_BE_REPLACED

Hello, hello! I know. It’s not lost on me that I’ve been an abject failure on the “writing new content” side of things. If it’s any consolation I’ve also been lackluster on a few fronts: Calling my mom. Avoiding pizza. Not (not) being jacked. Hugs. My free time has been monopolized by what can only… END_OF_DOCUMENT_TOKEN_TO_BE_REPLACED