Now that I’ve had a good 24-36 hours to decompress my brain, I wanted to take a few moments and share some of the shenanigans that went down last weekend at Cressey Performance.

As many of you know, my good friend and brotha from another motha, Dean Somerset, came to town for a few days along with roughly 20-25 personal trainers, strength coaches, chiropractors, and general fitness enthusiasts for our Boston Workshop that he and I hosted at Cressey Performance.

Stealing a line from Dean’s synopsis of the weekend over on his own blog, “it was without a doubt one of the best, most switched on groups I’ve ever had the chance to speak in front of, and everyone was really engaged, quick to volunteer, laugh, get their hands dirty, and make it a great experience for everyone.”

On Friday for all the attendees who came in a day early and had nothing better to do than sit at their hotel room watching re-runs of Games of Thrones on HBO we had the one and only Eric Cressey (THE Cressey behind Cressey Performance) come in and speak to the group on “Elbow Shizzle.”  His title not mine.

One of the main take home points was that when it comes to the elbow, especially with regards to the UCL, you have to take into consideration what’s going on up the kinetic chain – specifically the brachial plexus – in order to make any drastic progress with regards to tissue quality and eliminating pain.  The ulnar nerve starts up near C5-T1 and is often impinged in that area.

In many ways, an “elbow snafu” might not have anything to do with the elbow in the first place!  It’s imperative to look up (and down) the kinetic chain to rule other possibilities out.

Too, it’s important to take into consideration congenital laxity – especially in the baseball population – to dictate treatment and how one’s strength and conditioning program will flow.  The LAST thing you want to do is to excessively stretch someone who scores high on the Beighton Laxity score.

Afterwards, for those who wanted to stay, move around a bit, and play with all the toys in the facility, we had “open gym” where people could get a workout in and break a sweat. I may or may not have played Tiesto.

Because I was at the facility playing host Lisa, my girlfriend, was kind enough to pick Dean up at the airport along with Guillermo who flew in all the way from Mexico to attend the event.  No sooner than everyone walked through the door and dropped their bags did we hightail out of there to walk down to my neighborhood bar and grill to get our grub on.

The best part of the night was that after the fact, when we left the restaurant, walked outside, and waited to cross the street, some dude drove by with all his windows rolled down BLARING the theme music from Star Wars.  It was pretty much the most baller thing I’ve ever witnessed, and I couldn’t help but think to myself, “that dude’s got his shit together.”

Dean and I were up early Saturday morning and I want to say that he pwned roughly 600 mg of caffeine before we even got to the facility.  A tip of the hat to you kind sir!

After a few house warming words and greetings, Dean started things off with discussing the big rocks of assessment. What an assessment actually means, what to look for, and what kind of assessment should be done.

Do we just stand there creepily like a Mr. Smithers and stare?  Is there any place for a movement based assessment?  Are all assessment created equal?

At the end of the day, it’s about gathering as much information as you can to better ascertain what YOU as the fitness

professional will do to get your client the most efficient (and safest) results possible.

I followed suit by breaking down the CP assessment.  I was adamant that what we do at CP isn’t necessarily what I feel everyone should be doing, but that they kind of should (hint, hint).

The entire afternoon was then spent going back and forth with the attendees demonstrating the different assessment that Dean and I utilize and then allowing them to practice on one another to get a better feel for everything.

And, I managed to do all of this without taking my shirt off, which is saying something.

Saturday night a bunch of us met up for an all-you-can-eat meat fest at Fire and Ice in downtown Boston.  Ben Bruno even made a cameo appearance!

Here’s a pic that I Tweeted as a frame of reference of how glorious this place is: 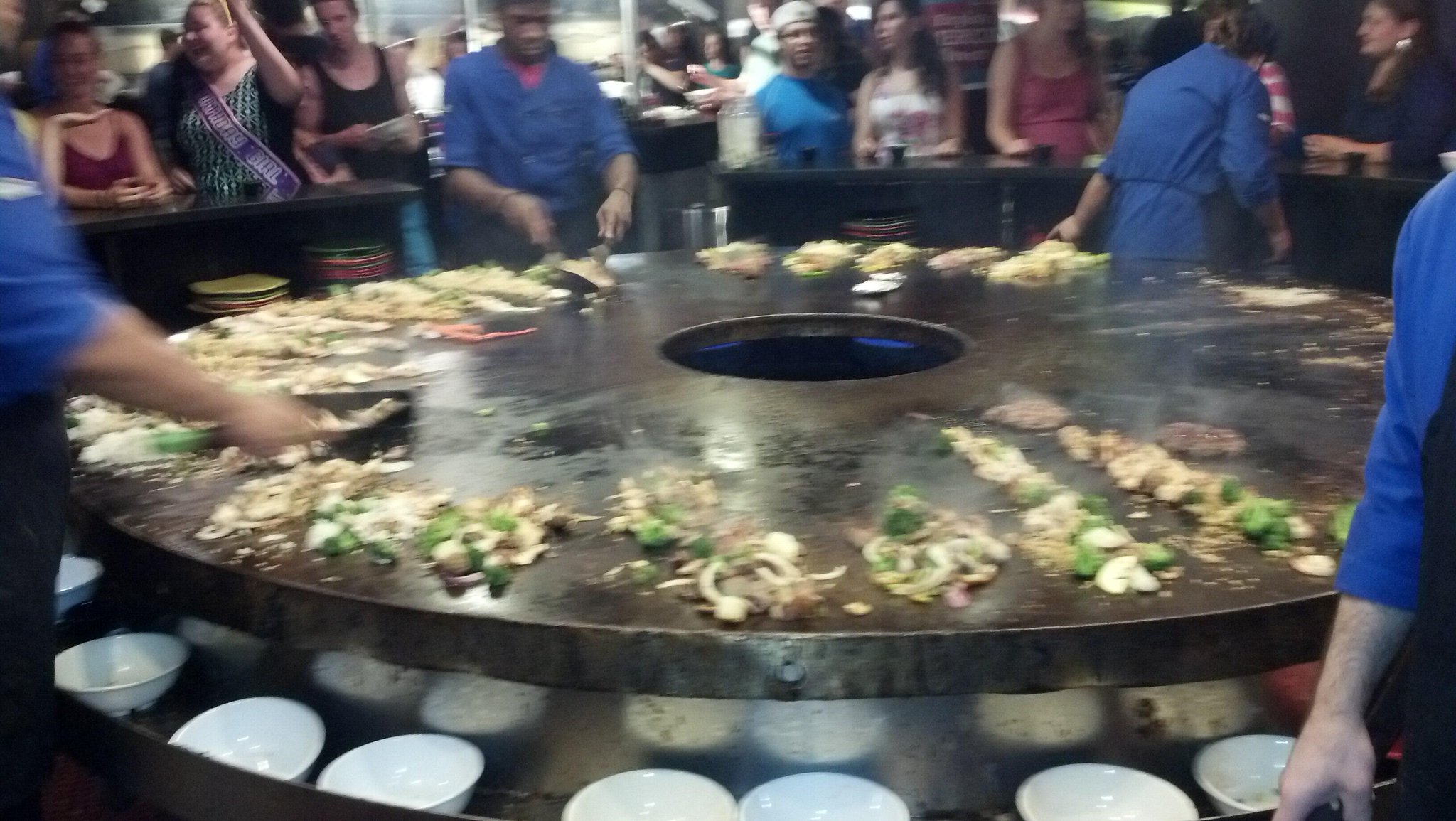 Sunday was lined up in much the same way at Saturday was.  Things kicked off relatively early – 9 AM – with me discussing “corrective exercise,” and what the even means.

I broke down the Law of Repetitive Motion and spoke to how that equation helps set the stage for how we can go about addressing any imbalances, weaknesses, and even pain.

The main point I hit home, however, and something I feel serves as the “umbrella” for ALL corrective exercise was this:

Sure we can do the song and dance where we wrap eight different bands around someone, have them stand on a BOSU ball, and juggle a bunch of oranges………but what are we really accomplishing here?

And this isn’t to downplay things like spending time coaching people on how to engage their core or working on glute medius activation.  That stuff certainly needs to be addressed sometimes.

But while I’m admittedly biased – I am a strength coach – I think there’s a lot to be said about grooving more efficient patterns (squat, hip hinge, lunge, push-up) and getting people strong(er).

Getting people stronger can be corrective.

After a quick lunch break Dean took over with some brand spankin new material and covered a topic he titled VooDoo: Hacking Anatomy for Immediate Results.

Again, stealing for Dean’s own review of the weekend: “My talk came up at the end, all about how reactive core training can improve flexibility without taking joints through a range of motion (aptly titled “Voodoo”). We discussed the importance of breathing for upper body and lower body limitations, and went through how to get reactive stabilization from breathing drills and specific core training directives to help improve specific limitations.”

To cap things off we had an expert panel Q and A which, along with Dean and I, also included Ben Bruno, Jim “Smitty” Smith (of Diesel Strength), and Mark Fisher (of unicorns, ninjas, and Mark Fisher Fitness).

On Monday Dean and I took a few attendees through a small group training session that started with a “flow” warm-up, and then we proceeded to deadlift their faces with a bunch of angry my-mother-never-loved-me-and-I-punch-kittens-in-the-face-for fun music blaring in the background.

Three guys broke PRs HERE, HERE, and HERE (this one includes one of the best celebratory fist pumps ever).

Afterwards Dean hung out at CP to observe the madness and wore what’s arguably the most epic t-shirt ever made. For those having a hard time seeing the fine print, here’s a screen shot: And since that’s pretty much the most absurd and funniest note to end on, I’ll stop there.

It was an amazing weekend, filled with amazing people.  And I’m truly honored that so many people took time out of their busy schedules to come hang out and (hopefully) get better.

Dean and I will most likely be doing this shindig again.  Maybe we should do a worldwide tour!

Being human means being enamored by a litany of things in the health/wellness/physical preparation realm. Some people are easily swooned by fancy watches and elaborate looking exercises Others by cryochambers and Paleo recipes that taste like sawdust. I am not here to play judgement police. For the most part, everything has a time and place… END_OF_DOCUMENT_TOKEN_TO_BE_REPLACED

Back tweaks are an inevitability. They happen to people who lifts weights regularly, and those who just look at weights. They happen when doing something as inane as bending over to tie your shoes, as well as when you’re doing some less inane, like, fighting crime at night. They happen on a Wednesday. There’s no… END_OF_DOCUMENT_TOKEN_TO_BE_REPLACED