Stuff to Read While You’re Pretending to Work: CrossFit “Elitism,” 10 Do’s of Mass, and Superhuman Strength

I wanted to start things off today with an interesting conversation I had with a friend/colleague of mine concerning CrossFit.

I can sense the eyes rolling already.

There’s enough CrossFit bashing on the interwebz to feed a small country (<—- that doesn’t make sense but I’m rolling with it), and I’m certainly not immune to my share of criticism. To that same tune, however, I feel like I’ve held a fairly “middle-ground” stance.

I’ve long noted my “qualms” with CrossFit, and I’ve also championed its many merits.  I see the good and bad in just about everything.  Except Justin Bieber.  He’s a douche.

I’m not one of those people who talks a bunch of smack, yet has never been to or walked inside an actual CrossFit affiliate. My experience with CrossFit lies outside of watching YouTube videos which make my corneas bleed and playing internet hero on an anonymous fitness forum

As it happens, I train at an affiliate 1-2 times per week – albeit in an “open gym” format – so I feel like I’m able to give my perspective and it has some context.

Does CrossFit “Bullying” or “Elitism” Exist?

Here’s an email I received yesterday from a friend (sadly, not IronMan):

“Hope things are well my friend! I had a question and potential favor to ask from you. For the past 1.5ish years I’ve been battling with how to run our CrossFit gym as well as possible, to the point of even receiving criticism from “elite” CrossFit gyms saying we have too much of a bias towards classic strength training.

What I have found extremely challenging is trying to establish an effective assessment system that carries over well to the CrossFit movements with which individual correctives can be prescribed.

What I was hoping to do was pay for some of your time in a consult to get some help in this area. I have tremendous respect for what you’ve done in the field, especially related to movement correction and know you would be a huge asset for us.”

(And let me preface everything by saying I understand that CrossFit is a BRAND and that certain things are expected of its affiliates).

UPDATE:  To say that I was wrong.  Kinda.  In actuality, as another friend of mine pointed out to me via Facebook, “What many people don’t understand about CrossFit is that it is anything but a franchise that enforces uniform standards. In some ways, it is an anti-franchise. Affiliates are free to set their own fees and programming, buy the equipment they prefer, and even sell T-shirts with their affiliate name on it and keep all the money.

What I have heard is affiliate owners argue passionately for their vision and try to build their business on that basis.”

I’m honestly at a little loss for words that “elite” CrossFit gyms are criticizing anything? Why? 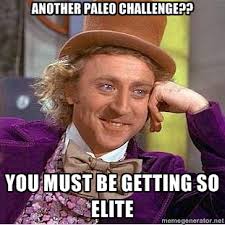 What makes them “elite” anyways? Total number of members? Revenue? Number of members who compete in the Games? They’re somehow more “paleo” than the next affiliate?

Who cares if someone chooses to take more of a “classic” strength and conditioning approach with their programming?

And what does “classic strength and conditioning” even mean? Is it bad or frowned upon in the CrossFit community to help get their members stronger, to move more efficiently, and, god-for-bid, actually progress (and regress) people appropriately?

If so, I think Kelly Starrett just shit a copy of Becoming a Supple Leopard!!!

What concern is it of their’s how someone else runs THEIR facility?????

I would think, if anything, one should be applauded for actually giving a shit and taking the time to properly assess/progress his or her clients!

Are these “elite” affiliates upset that he’s not putting in enough “Kool-Aid” (high-rep OLY lifting, kipping pull-ups, WODs which make no sense) into the juice?

(Yes, that’s a bit of a generalization. But lets not delude ourselves into thinking that that’s NOT what a vast majority of people feel embodies the CrossFit brand).

I don’t get it. There are some things I like about CrossFit, and I’d be remiss not to tip my hat to them for helping to get people excited to move.

But I have to say: this elitist, holier-than-thou attitude doesn’t do it any favors.

This topic led to a ton of great dialogue on my Facebook page, and since the whole impetus behind it was assessment I wanted to share a link someone else posted which I feel points the conversation/debate in the right direction.

Can FMS and CrossFit Coexist? – Gray Cook and Kelly Starrett

If you have fifteen minutes to spare I HIGHLY recommend watching it.  Two brilliant guys talking shop. What’s not to like?

Bryan has over 20 years experience in this field – both as a lifter and writer – and it’s uncanny how often I find myself nodding in agreement whenever I read some of his articles.

Guys like to make things more complicated than they have to be.  Adding mass doesn’t entail following some advance algorithm that would confuse a NASA scientist.  It doesn’t require some super secret, Eastern-Bloc periodization protocol you had translated from some Russian textbook. And it certainly doesn’t entail any deer antler powder.  Is that trend over yet by the way?

What it DOES require is some common sense and accountability.

“You can’t rush strength.”  And in this article, Artemis explains why.

Being human means being enamored by a litany of things in the health/wellness/physical preparation realm. Some people are easily swooned by fancy watches and elaborate looking exercises Others by cryochambers and Paleo recipes that taste like sawdust. I am not here to play judgement police. For the most part, everything has a time and place… END_OF_DOCUMENT_TOKEN_TO_BE_REPLACED

Back tweaks are an inevitability. They happen to people who lifts weights regularly, and those who just look at weights. They happen when doing something as inane as bending over to tie your shoes, as well as when you’re doing some less inane, like, fighting crime at night. They happen on a Wednesday. There’s no… END_OF_DOCUMENT_TOKEN_TO_BE_REPLACED