I became the regular “Friday Bootcamp Guy” at CP a few weeks ago.  I had been filling in sporadically the past year to 1) give Greg a bit of a break from having to get up at the butt-crack of dawn and 2) for a slight change of pace on my end.

Coaching bootcamps allows me the opportunity to work with people I normally don’t have the chance to see, and well, it’s just plain fun!

Not that people who make a consistent habit of getting up at 5AM to exercise need any more motivation to do so, but this morning while each bootcamp was warming up I alternated between playing the Al Pacino “One-Inch!” speech from Any Given Sunday and the Kurt Russell “screw the Soviets” speech from the movie Miracle.

By the end I’m pretty sure each bootcamper wanted to either fight a polar bear or challenge one another to a cage match as a finisher.

It sure beats Prowler medleys or kettlebell swings!

Nevertheless, it’s been a long day and since I’m sitting here at the car dealership as my car gets serviced (oil change), I figured I’d toss up a few things for you guys to check out.

How to Bullet Proof Your Body – Girls Gone Strong 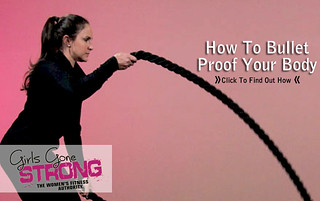 I shared a video with you the other day from Molly (Galbraith), which discussed some of the differences or tweaks that many women must make with their fitness training if they truly want to make progress.

In anticipation of their new manual, The Modern Women’s Guide to Strength Training, which is being released next week, Molly is back with another FREE video discussing how women can “bullet proof” their bodies.

In short:  less is more.

Holy f***balls this was an awesome article.

I’ll be honest:  It used to bother me whenever someone on the internet went out of their way to say hurtful or spiteful things towards me.  I wouldn’t stay at home, plop on my couch with a pint of Ben & Jerry’s, and watch a Julia Roberts movie or anything….but I’d be lying if I said certain things didn’t affect me or make me want to react.

It wasn’t long before I learned to ignore the haters and to just chalk it up to “ it’s what people do when they have nothing else to do and they suck at life.”

Jason hits the nail on the head with this post.

Workout Nutrition: What to Eat Before, During, and After Exercise – Brian St. Pierre

Okay, I’ll admit it:  I’m a bit biased in that Brian’s a good friend and a former employee of Cressey Performance.  But man if this isn’t one of the most detailed and thorough articles I’ve read on this topic!

I’m so proud to see how much of a big deal Brian’s become in the industry and it’s so cool to see him putting out such amazing content.

I’ve been a fan of “offset” loading for a number of years now. Without getting too deep in the weeds on what offset loading is and what the benefits are… …it’s when you either stagger your foot or hand position on certain exercises OR you load an exercise a certain way (how you hold a… END_OF_DOCUMENT_TOKEN_TO_BE_REPLACED

Last week I received an email from Jon Goodman. At first I thought he was going to extend an invite to me to come up to Toronto for a weekend of watching Jean Claude van Damme movies. But that wasn’t the case. Fingers crossed for next time. Nope, instead Jon was curious if I’d be… END_OF_DOCUMENT_TOKEN_TO_BE_REPLACED