How the Kettlebell Can Improve Your Deadlift

I had an interesting conversation with my good friend and fellow strength coach, Ben Bruno, not too long ago.

He and I like to catch up every now and then to 1) discuss our mutual affinity for JP Licks ice-cream and 2) talk some training and fitness shop.

He’s originally from New England and worked as a coach at Mike Boyle Strength and Conditioning for a handful of years before moving out to LA last fall for a change of pace and to pursue some other opportunities.

His typical clientele now out in LA resembles a litany of Hollywood A-listers and a “who’s who” of gossip magazine covers, as well as those people who have a bit more of an aesthetic bias towards training.

While he loves LA and the people he works with, a small percentage of his heart is still back in Boston, working with athletes and helping people get strong.

In one of our last conversations he made the comment that there’s a stark contrast in training mentality between the west and east coast. But a little context comes into play.

Whereas at Cressey Sports Performance, someone nails a 400+ lbs deadlift and no one bats an eye, out in LA someone hits that same lift in a commercial gym and it’s assumed they’re on steroids.  And then given their own reality tv show!

Ben noted that whenever he’s tried to get some (not all) of his female clients to train with free-weights they were a tad skittish and reticent to place any appreciable load on the barbell.

Truth be told, while the tide is slowly turning for the better (more and more women are reaping the benefits of strength training. See: CrossFit), there’s still a “barbells are scary” vibe that pervades the female psyche.  It’s slight, but it’s still there.

Ben noticed a funny thing, however.  He noted that whenever he had his female clients use kettlebells they were more than eager to “get after it.” It was almost as if they didn’t think kettlebells counted as strength training.

Whether he had them squat, deadlift, push, pull, swing, carry, or anything else you can think of to do with a KB, seemingly, they’d be more than willing to do whatever Ben told them to do. And then some.

Plus, they’d do it with some heavy ass weight.

I too have noticed this same phenomenon with some of my past and current female clients. Ask them to perform a barbell deadlift and you’d think I asked them to shoot Bambi. Of course, this notion doesn’t surprise me when you have female professionals like THIS ONE telling everyone how dangerous deadlifts are.

Idiocy notwithstanding, switch to a KB deadlift and it’s on like Donkey Kong. Lets be honest:  KBs are just a smidge less intimidating for some people (guys included), and they’re actually more useful and better than barbells in some cases.

I mean, not everyone has access to a state of the art gym and kettlebells don’t take up a lot of space, so they’re a fantastic option for quick and efficient home workouts.

In addition they’re great in terms of their versatility and “user friendliness” in general.

The Kettlebell Can Actually Help Improve Your (Barbell) Deadlift

More to the point, the kettlebell swing can help improve your deadlift.

But before we get into the nitty gritty, it would behoove us not to at least discuss proper technique with the swing.

To that point I have two go-to sources.

If you watched both videos (and why wouldn’t you?), you can see that both camps mirror one another in terms of how they coach and cue the swing.

With that out of the way, lets discuss how the KB swing can help improve your deadlift.

The biggest mistake I see most people make with the swing is thinking that it’s more of a squat swing as opposed to a hip snap swing.

Look at this picture below of what the setup looks like for a KB swing. 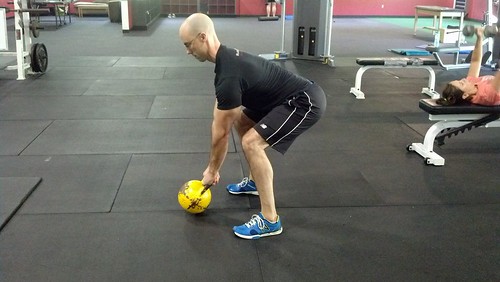 Yeah, yeah the model is dashing. But other than that does anything look vaguely familiar?

It should, because it’s pretty much a dead-on image of what the set-up for a deadlift looks like (with the exception that with a barbell deadlift, the bar itself will be closer to the body and directly over the mid-foot, if not right up against the shins).

With the swing I like to cue one of two things to ensure tightness in the upper back:

1. Pretend like you’re squeezing an orange in your armpit and you’re trying to make orange juice.

2. Put your shoulder blades in your back pocket. This is a non-nerdy way of telling someone to posteriorly tilt their scapulae and to activate their lats (as well as the thoraco-lumbar fascia).

Maintaining this “tightness” is key to the KB swing as well as a deadlift.

Remember above where I said the KB swing should resemble more of a hip SNAP.  That point cannot be overstated.

The swing is an excellent way to help develop maximal force production. Think I’m full of it? Here’s what Strong First instructor and recent “I-made-the-Iron-Maiden-Challenge-My -Bitch” graduate, Artemis Scantalides, had to say on the matter.

“The purpose of the kettlebell swing is maximal force production.  Therefore, if the correct force is applied to an 8kg (~18lbs) kettlebell, that 8kg kettlebell can weigh up to 80lbs.

Subsequently, the kettlebell swing helps to improve deadlift strength because it allows you to use the lowest system load for maximal results. You are getting the most bang for your buck, by using less weight.

As such, if you do not have a heavy weight available to you for deadlifts, then just do a few sets of perfect kettlebell swings and apply maximal force, and you just worked towards a stronger deadlift.”

Kettlebells have a ton of merits, as I think we’ve covered. While they’ll never replace barbells for the big lifts, I like them because of all the ways they assist everything else. Obviously, they can help increase the deadlift, which I love.

But kettlebells are also an amazing tool for active recovery, conditioning, or just as the mainstay in any great home-based program. If you’re looking for an awesome program featuring kettlebells, there’s really no reason to look any further than Lean & Lovely, the new program from the aforementioned Neghar Fonooni.

It’s obviously geared towards women, but let me tell you, if you use a 28kg bell and do any one of the workouts, you’ll very quickly see how guys can benefit from every single page of the book.

It’s 12 weeks of dedicated program, 25 extra bonus conditioning type workouts, and a ton of other stuff.

Most importantly: something like 40% of my readers are actually other trainers. People look to this blog to find ways to get better for themselves and their clients; to become better at their jobs.

I take that responsibility very seriously–so when I say that I think Lean & Lovely is a resource that ANY trainer can use, I mean it. If you pick up just one coaching cue to teach the swing, it’s worth it. If you pick up just one new way to communicate more effectively with your female clients, it’s worth it. And if you read through the book and it gives you ideas you can use to design workouts, it’s more than worth it, 10X over.

That’s the best part about continuing education. Small investments pay huge dividends. So, again, Lean & Lovely is pretty much a no brainer.

One final note, about “marketing.”

I caught some flak on Facebook the other day for recommending L&L. Which is crazy. It’s a good product, and one I think will help people. Does my article help move some units? I sure hope so. But consider this.

In the back end of my blog, my metrics indicate that, including this one, I have now published 1373 posts. Of those, if I had to take an educated guess, less than 30 have mentioned or “promoted” some type of program or product. Less than 30. That comes out to about 2.25%. And that isn’t counting any of my articles published elsewhere, which, like my blog, are a FREE resource.

So, really: it’s mathematically unarguable that I only “promote” stuff I believe in. Programs and products that I really and truly think will add value to my readers or the fitness community and industry over all. Lean & Lovely is absolutely one of those programs, so I absolutely feel comfortable telling your to order it. It’s as simple as that.

If that’s not cool with you…well, my bad.

I received a question recently via my Instagram DM’s and figured it prudent to take some time to write a more thorough response I could share with the masses here. 1. I hope it helps and makes sense. 2. Um, why aren’t you following me on IG? Here’s the question: “What is your response to… END_OF_DOCUMENT_TOKEN_TO_BE_REPLACED

Fitness professionals are notorious for myriad of things: Wearing sweatpants to work everyday. It’s definitely one of the perks of the job. Always forgetting about the protein shake shaker in their gym bag (or in their car) that invariably, three weeks later, ends up melting someone’s face off once it’s opened. Their affinity for smedium… END_OF_DOCUMENT_TOKEN_TO_BE_REPLACED