SPOILER ALERT:  No. Women don’t need to train differently than men. Sometimes they should, however.  More on that below.

And speaking of spoilers – how many people stayed for the bonus scene after the end credits of Guardians of the Galaxy?

How many in the ballpark of my age (37) chuckled to themselves with the Howard the Duck cameo appearance?

Sooo funny/random, right?  And not to be out-stated, as a whole, Guardians was as nerdtastic as nerdtastic could be. I remember thinking to myself when I first saw the trailer a few months ago, “Yikes! How is Marvel going to pull this one off?  I think they might have bitten off more than they can chew.”

But kudos to them for yet again setting the standard for comic book movies. Epic fail on my end for doubting them.

So what has this got to do with training women?  Actually, nothing.  But for what it’s worth I gave the movie a solid 4.5 lightsabers out of 5.

Okay, for real this time.

The topic of female specific training is a dicey one to say the least. I think one of the reasons why I write about is so much and why I’m so passionate about it is because I find most (not all) women are misinformed.

Or to be more precise, are nudged towards a specific mindset at some point in their lives.

This was never more apparent than a conversation I had with a former female client of mine last year.  This client was a mom and a personal trainer herself.  She came to Cressey Sports Performance, like most trainers like her do, to hire someone else to do the thinking for her. For the record I’d recommend to ALL trainers to hire their own coach at some point!

As it happened, my client loved training at the facility and loved our approach to training female clients/athletes and eventually reached out to the local high-school where she lived to see if she could volunteer her time. She reached out to several of the coaches for the female JV and varsity teams, as well as the athletic director of the school (who also happened to be female and a varsity coach).

Long story short, the coach wrote back saying that getting any of the female athletes to come to 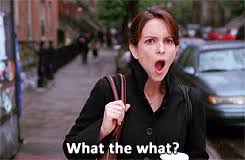 the school-gym during their summer break was a pointless endeavor given that the weight-room had, in her words, “limited equipment that was ‘female friendly’.”

She DID NOT just say that.

When my client told me that story I was dumbfounded!  With that sort of mentality and message being relayed to young, impressionable youth by adult “role models” is it any wonder that there’s a growing DECLINE in girls participating in sports?  And more to the point, can we be at all surprised why so many are programmed into thinking that girls don’t belong in the weigh-room, that just thinking about touching a barbell will make them grow an Adam’s apple, and that instead they should just focus on cardio, yoga, pilates, and Barre classes?

NOTE:  I have nothing against yoga, pliates, or Barre classes. Unlike a lot of fitness professionals who like to bag on certain modes of exercise, I’ve actually taken – and written about my experience – a yoga class and pilates class.

Any exercise is good exercise.

What I don’t agree with is how these classes are generally marketed towards women as some end-all-be-all panacea of health and fitness.  Based off the key words and promises many of these classes highlight – stuff like building “long, lean muscle” which is utter BS  – I’m surprised no one has elucidated on the benefits of bathing in unicorn tears to boot!!

I LOVE training women and female athletes for many reasons. For starters I think it’s rad when one of them hits a PR on a particular lift or achieves something they never thought possible – their first unassisted chin-up for example – and they end up having a “light-bulb” moment where they finally accept that they have just as much to gain from strength training as their Y-chromosome counterparts.

I love “deprogramming” them from the stagnant and life-sucking mentality many have been inundated with since junior high and high-school.  I love seeing the sense of confidence, empowerment, and freedom that blossoms once they understand that strength is a good thing and is something that should be embraced.

And while the saying states the girls are “made of sugar and spice and everything nice,” I can say without hesitation that some of the most tenacious and competitive clients I have worked with in my career are women.

Here’s distance coaching client, Sarah, cranking out a set of chinups. Yes, we can make the argument that she’s not extending her elbows at the bottom, but she called herself out on that when she sent me this video.  The point is, when we started working together last October the could perform ZERO

Here’s CSP bootcamper, Paula, crushing some KB swings as part of a finisher AFTER hitting up heavy deadlifts and squats earlier in the workout.

Yes, as some commenters posted on YouTube, she’s hinging early, blah blah blah. I appreciate the feedback (and I agree!), but it’s by no means an egregious snafu in her overall technique and is a far cry from a lot of the eye-wash “swings” other trainers and coaches post on their pages.

Regardless this is someone whose work ethic is outstanding and you’d be hard pressed to find anyone more competitive than her.

And here’s former client of CSP, Cara, hitting a challenging-but-not-nearly-as-heavy-as-she-could-go-deadlift at 33 weeks pregnant.

And before someone chimes in with a “holy crap Tony, are you insane for allowing a pregnant women lift that heavy?” comment, please read THIS.

Also, I can’t let this video slide without making a slight crack at the musical selection.  Kind of ironic, huh?……..hahahahahahaha x 10!

And it’s on that note I’d like to direct people to a presentation I recently filmed for Mike Reinold’s RehabWebinars.com:

It’s a 75 minute webinar that covers my general approach to training women. I discuss everything from initial intake/assessment to many of the progressions and programming strategies I implement to “specialty” scenarios like training someone through their pregnancy as well as covering some of the often glossed over psychological barriers that prevent women from stepping foot in the weight-room in the first place. 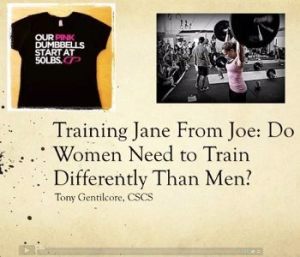 In addition I also cover such water-cooler topics as does weight training make women “big-n-bulky?” and why do people continue to listen to Tracy Anderson?

I feel this would be an excellent resource for any trainer or coach who works with female clients!

The cost is $19.95, but you’re not just purchasing the presentation itself.  You’re also gaining monthly access to ALL the content on RehabWebinars.com which includes dozens of hours of great contact from some of the most prestigious people in the fields of rehab, strength, and sports medicine.

If you pride yourself on continuing education and want to stay on top of the most relevant topics in the industry, this is one of the best ways to do so.

Click below to not only get access to my presentation, but over 100+  as well.  But mostly because of mine……..;o)

Being human means being enamored by a litany of things in the health/wellness/physical preparation realm. Some people are easily swooned by fancy watches and elaborate looking exercises Others by cryochambers and Paleo recipes that taste like sawdust. I am not here to play judgement police. For the most part, everything has a time and place… END_OF_DOCUMENT_TOKEN_TO_BE_REPLACED

Back tweaks are an inevitability. They happen to people who lifts weights regularly, and those who just look at weights. They happen when doing something as inane as bending over to tie your shoes, as well as when you’re doing some less inane, like, fighting crime at night. They happen on a Wednesday. There’s no… END_OF_DOCUMENT_TOKEN_TO_BE_REPLACED