The Grind and Investing in Yourself

I love what I do for a living. I know a lot of people can’t say that.

I always make a joke about my career path. When I was finishing up my undergraduate work out of college I came to a metaphorical fork in the road.

In one direction I could take my degree in Health Education and become a high-school health teacher. At the time I had just completed my student teaching requirement and by and large had a positive experience.

Helping to mold and shape young minds had a nice vibe to it. Plus, I had visions of coaching baseball, starting a weightlifting club, and who knows, maybe a book club or a Star Wars aficionado fanboy nerd group where we could dress up in homemade Jedi cloaks and argue over whether or not Han shot first.

In the other direction was a career in fitness. In addition to my major I also had a concentration in Health/Wellness Promotion, and as part of that I was required to participate in an internship the summer after my senior year.

I was lucky enough to find a placement in a corporate fitness center, and spent three months that summer hanging out in a gym. Sure enough, as the intern, I had to do “interny” stuff like get up at the crack-ass to open the gym early, make bulletin boards (not a fav), clean, and wash and fold towels. Lots and lots and lots of towels.

I still have nightmares.

When the time came to decide what I wanted to do – health teacher or gym rat? – the choice was pretty easy.

Who wants to wear a tie to work everyday anyways? I certainly didn’t.  Hell, I didn’t even own a tie back then.

I opted to become a certified personal trainer which, above all else, allowed me the luxury of wearing sweatpants to work.  Holla!!!

Sweatpants are about as unglamorous as it gets (nothing some glitter paint can’t fix though), and to be honest, it’s fitting, because a career in fitness can be equally as unglamorous.

Early mornings, cranky clients, unmotivated clients, long days, clients that don’t show up, living out of tupperware containers, trying to find the time to workout yourself, managers more concerned with hitting a quota over quality of services, 7-day work weeks, no paid vacation, “what do you mean I have to wear a collared shirt to work!?!  A COLLARD SHIRT!!!!!!!!!!!!!!”

As much as I could bitch and whine about how hard things were when I first started, I wouldn’t change a thing.  I truly believe that the trials and tribulations I endured working my way towards a CAREER is what helped me succeed in the long run.

I know a lot of upcoming trainers scoff at the idea of working in a commercial gym setting. “I didn’t go through four years of college to train lonely housewives everyday,” some say. “Point me in the direction of the pro athletes!!!”

I hate to burst your bubble champ, but it doesn’t work like that. It never works like that.

I worked in a commercial gym setting for FIVE years, and didn’t train my first professional athlete until we opened up Cressey Sports Performance in 2007.

And I always say that it was those five years of working in a commercial gym that helped hone my skills as a trainer and coach. It allowed me the opportunity to work with an entire spectrum of different people ranging from the unmotivated to the highly motivated to the bat-shit crazy.

Becoming a successful coach is just as much about knowing your anatomy, program design, and ability to actually coach, as it is not being an asshole and being able to relate to people.

Going through (and accepting) the grind is something that should be pursued.

More germane to the point I’m trying to make are those trainers (both rookies and veterans) who have an insatiable sense of entitlement.  One of the best rants I have ever listened to on this topic comes from Derek Woodske.

To mirror Derek’s message: as with any industry, there are many good seeds, but infinitely more that give the rest of us a bad name.

Maybe I’m biased, but to me this is never more apparent than in the fitness industry. There’s a lot of eyewash out there. I live in a bit of a bubble (now) where I’m surrounded by a lot of very smart, passionate coaches who give a shit. We take pride in not only consistently trying to make ourselves better, but holding one another accountable too.

When I travel outside of the bubble I’m often amazed – more like dumbfounded – at what I observe and witness.  Again, to reiterate, they are many, many outstanding trainers out there. But seemingly, they get drowned out by the aforementioned eye wash.

Sometimes I have fight off the urge of throwing my face into a cement wall whenever I watch some personal trainers work with their clients.

More often than not I feel as if the client would get just as good of a training session if he or she flushed their money down the toilet.

Part of that is due to many entering the industry and approaching this as more of a hobby than a career.  That’s fine.  These are the trainers and coaches who putter out within a year or two anyway.

The other part is due to many (not all) trainers unwilling to invest in themselves.  Many take the mentality that once they’re certified, that’s it!!, mission accomplished.  And then unsuspecting people are paying upwards of $80, $90, $100+ per session to be told to stand on a BOSU ball.

I posted this on my Facebook Wall the other day:

I’m always amazed when trainers complain about how they can’t afford “x” seminar/workshop or that “y” product/service is too expensive (despite the fact either of the two will most likely pay themselves off in the long run). Yet, won’t think twice when the new iPhone comes out.

I’ve always placed a premium on continuing education. Even when I didn’t necessarily have the funds to do so I always made an attempt to attend 3-4 seminars/workshops per year (and I still do!). Moreover, I go out of my way to  buy books and DVDs to further my knowledge base.

1.  These items almost always end up paying for themselves in the long run. I can’t recall how many times I’ve taken one piece of information I learned from a seminar and used it to earn the trust of a prospective client, who would then end up purchasing a package that surpassed what I paid for the seminar in the first place.

2.  What’s more, and many trainers fail to realize this, you can write off a certain percentage of your continuing education on your taxes.  So you’re not really paying “full” price. Stick it to the man!

I guess all I’m trying to say is this: give a shit!  Please.

Well that, and you should totally come to mine and Dean Somerset’s workshop in DC (HERE) or in Los Angeles (HERE).

Also, my good friend, Artemis Scantalides, is holding her I Am Not Afraid to Lift workshop at Iron Body Studios located just outside Boston on November 8th. 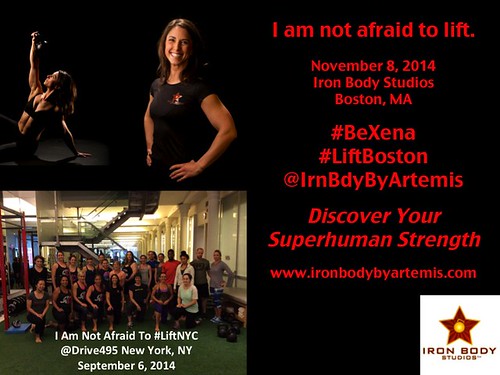 There aren’t many female coaches in the industry offering strength workshops and Artemis is one of THE best in the business.  I know.  I’ve been coached by her!

This workshop is open to both women AND men and will be a stellar day of learning, no question.

So there you go trainers.  Get better and build a more successful career or the latest iPhone?

Note to Reader: How many of you read the title of the post, saw “The Grind,” and immediately thought I was referring to the 90s dance themed show on MTV starring Eric Nies?

No?  That wasn’t what you were thinking?  Yeah, um, I wasn’t either.  I mean, that’s just lame. Soooooo, whatcha doin today?

I received a question recently via my Instagram DM’s and figured it prudent to take some time to write a more thorough response I could share with the masses here. 1. I hope it helps and makes sense. 2. Um, why aren’t you following me on IG? Here’s the question: “What is your response to… END_OF_DOCUMENT_TOKEN_TO_BE_REPLACED

Fitness professionals are notorious for myriad of things: Wearing sweatpants to work everyday. It’s definitely one of the perks of the job. Always forgetting about the protein shake shaker in their gym bag (or in their car) that invariably, three weeks later, ends up melting someone’s face off once it’s opened. Their affinity for smedium… END_OF_DOCUMENT_TOKEN_TO_BE_REPLACED