Hey Vogue Magazine, Thanks For Setting Women’s Fitness Back A Few Decades

My wife is angry at you Vogue. And so am I.

The other night as I plopped down on the couch after a long day at the gym to say hello to Lisa and to catch up on her day, she chuckled and said, “oh boy, do I have something to show you.”

Knowing it was Vogue I wasn’t sure what to expect. All I knew was that Lisa had handed me the piece of paper with some conviction.

Was it fashion tips for me?1 Outlandish outfits? Offensive accessories? Was neon green named this year’s color of Fall? Shit, no, maybe it was something far, far worse…skinny jeans for men are here to stay!?!?!

Thankfully it had nothing to do with any of those things.

Rather the article she handed me was on, of all things….foam rolling?

At first my wife was like “oh, wow, cool…..I can’t believe there’s an article on the benefits of foam rolling in a mainstream magazine like Vogue!”But then she read it, and noticed the all-too familiar feeling she gets whenever she ends up reading mainstream fitness fiction: Disappointment and the uncontrollable urge to punch a wall.

I couldn’t find a link online, so I opted to take a picture instead. Here you go.

I take no responsibility if a small piece of your soul dies: 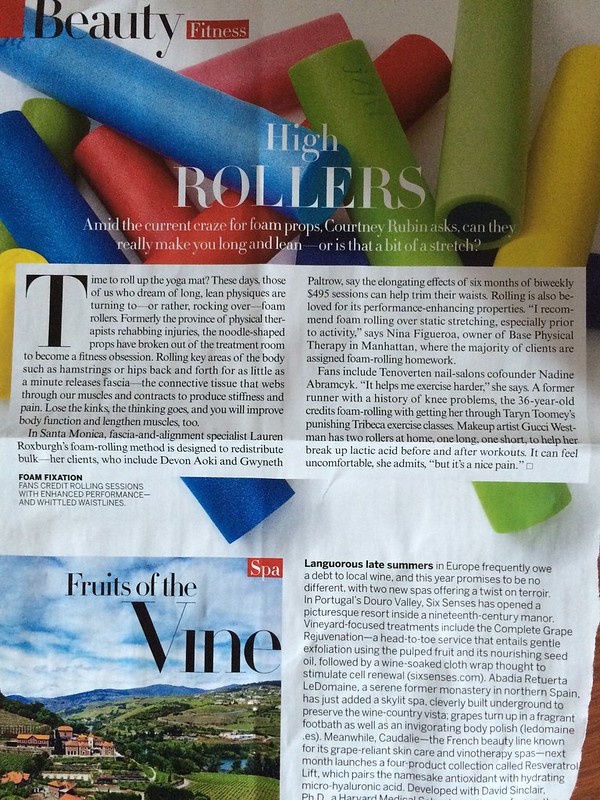 Behold: A parfait of fitness fact and fiction, topped with a fluffy yet crisp meringue of bullshit. Toning, lengthening, leaning, bullshit.

“Amid the current craze for foam props, Courtney Rubin asks, can they really make you LONG AND LEAN – or is that a bit of a stretch?”

– Is the craze really that current? I started using foam rollers with my clients over a decade ago. I’ll give a pass here because Vogue is a fashion magazine, not a fitness magazine, and staying on top of the latest fitness trends isn’t their strong suit. Plus, Lisa did defend this subtitle, reminding me that foam rollers can now be spotted in gyms, commercial and otherwise, as well as stores like Marshall’s and other chains with popular fitness equipment.

However, after reading on, I wished Vogue decided not to stray from their wheel house.

– Because lo and behold, there they were, those terrible words, rearing their ugly heads again….the dreaded “long and lean” buzz words that mainstream magazines love to use to prey on women and promote unrealistic expectations.

2. From the first paragraph of the article:

“These days, those of us who dream of long and lean (<—ahhh, my eyes) physiques are turning to – or rather, rocking over – foam rollers.”

– LOLLOLOLLOL. I see what you just did there Vogue. Very witty. But come on, can we stop with the LONG AND LEAN nonsense?

Let’s first review a clear and permanent fact you can’t lengthen a muscle without lengthening bone. Muscles have what we refer to as an origin and insertion. This is something you cannot change without some rather extensive (and painful) bone lengthening surgery or a magic spell from Professor Dumbledore.

A defender of the article might argue that a muscle could technically be “longer” (or lie flatter?) after scar tissue, adhesions, or “the kinks” as they refer to them, has been rolled out. Do you think your reader is thinking technically, Vogue? Of course you don’t. You know that when the average reader is reading “longer and leaner muscles” she is not envisioning excellent tissue quality, like this:You know that she’s envisioning this:

So, was this statement made out of ignorance of human anatomy, or a deliberate twisting, or “spinning” of a fact in order to promote magical thinking? Either way, it is offensive to those who know better, and a major disservice to those who don’t, but would very much like to!

Many (not all) women who read this article are going to equate foam rolling with trimming their waist and getting skinnier, which is absurd.

This is why people (women and men) do stupid shit, often waste their time spinning their wheels at the gym, and why many have unrealistic expectations and rarely (if ever) attain the results they’re after.

Foam rolling DOES have a place and there’s a ton of validity to it. Just not in the way it’s being portrayed in this article.

3. From there it’s more blah, blah, blabiddy, blah and then we get into some legit, credible information:

“Rolling key areas of the body such as the hamstrings or hips back and forth for as little as a minute releases fascia – the connective tissue that webs through our muscles and contracts to produce stiffness and pain. Lose the kinks, the thinking goes, and you will improve body function and lengthen muscles, too.”

– Love it! The article did give a loose “background” of the history of foam rolling and how it’s been traced back to the rehab/physical therapy realm, that it targets fascia, and that rolling helps “break up” connective tissue which can (not always) lead to stiffness and pain. Bravo

It’s quick and a bit reductive in it’s explanation, but whatever. It’s not inherently wrong. And I’d imagine there was a word count to be cognizant of.

Unfortunately, this brief little blurb takes another wrong turn – right back to fiction. This is why everyone gets duped. Articles like this toss out a fact as bait, switch to fitness fiction, brimming with magical cures and fairy princesses (or Gwyneth Paltrow. But same difference), and then start to mind fuck the reader.

4. And right on cue we get introduced to some revolutionary answer/quick fix.

“So and so’s (I’m not going to share the name, you can read it for yourself) foam rolling method is designed to redistribute bulk – her clients, who include Devon Aoki (no idea who that is) Gwyneth Paltrow2 say the elongating effects of six months of biweekly $495 sessions can help trim their waists.”

– What does “redistribute bulk” mean?

What is “bulk”? Is it fat? Muscle? Vital organs? Whatever it is, it’s negative, and when you prompt the average American woman to consider the presence of “bulk” on her body, the resulting thoughts and feelings are not good.

So anyone reading this is going to think to herself, “Hmm, I have big thighs and big hips,”(undoubtedly leading to a negative inner monologue about her body) and THEN she’s thinking a foam roller is going redistribute her bulk from her hips and thighs to maybe other areas of her body.3

– Also, can we do the math? Six month’s worth of twice-a-week foam rolling instruction is costing someone roughly $12,000???? Must be tricky! It must be too complicated/sophisticated/dangerous for someone to perform on her own. For free.

Even more ironic is that I googled some videos put up by said foam rolling expert and most of them don’t even show her using the foam roller for its intended use (in the away the Vogue article suggests). I mean, she uses the foam roller (as a prop) to perform various glute bridges, push-ups, rollouts, etc…but not in the way suggested by the article.

Sure, the article says “props” but then discusses rocking/rolling and addressing fascia/kinks/etc. Not the same thing.

To her credit, though, the woman does have several videos demonstrating more traditional uses geared towards self-myofascial release and addressing (soft) tissue quality, which I am 100% on board with.

CAN HELP TRIM THEIR WAISTS???!!!! My wife was yelling when we got to this part. Vogue has just notified all readers that they can trim their waists by foam rolling. Just let that sink in.

But the best case scenario is that women read this article and feel indignant and insulted. Buzzwords like elongating, lean, lengthen, etc should instantly put up a red flag. The worst scenario? That women are going to read this article and think foam rolling will trim their waist and get them leaner. (Just for the record. One more time. Fat loss gets folks leaner).

NOTE: It would help if Vogue took the time to differentiate between actual foam rolling and using the word prop correctly. I know, I’m being nit-picky.

5. In the middle we get some more quality nuggets of information, this time factual (again the parfait effect):

Rolling is also beloved for its performance-enhancing properties. “I recommend foam rolling prior to physical activity,” says Nina Figeroa, owner of Base Physical Therapy, where the majority of clients are assigned foam-rolling homework.

Awesome. I’m on board with that. I feel bad for Nina, though. She’s most likely someone who’s well-versed and understands the science, yet quoted in an article selling foam-rolling as a body slimming method.

6. And the coup de grace, end-all-be-all shititude of a comment from the article:

“Makeup artist Gucci Westman has two rollers at home, one long, one short, to help her break up lactic acid before and after workouts.”

Too bad lactic acid is “buffered” by the body fairly quickly and converted back to glucose to be used as energy substrate during exercise.

Lactic acid can’t be broken up by a foam roller.

Do you even science Vogue Magazine? And why are you soliciting fitness advice from make-up artists?

You just wrote an article that set women’s fitness back decades, and told them that foam rolling will slim their waist and worse, redistribute bulk. Why not just roll out some stock footage from the 1920’s of women using those vibrating belts to battle belly fat?

It’s just as useful as this article.

Worse, you continue to use fictional buzz words and questionable commentary that does nothing other than confuse the reader and make the weeds thicker. You can do better than that.

Being human means being enamored by a litany of things in the health/wellness/physical preparation realm. Some people are easily swooned by fancy watches and elaborate looking exercises Others by cryochambers and Paleo recipes that taste like sawdust. I am not here to play judgement police. For the most part, everything has a time and place… END_OF_DOCUMENT_TOKEN_TO_BE_REPLACED

Back tweaks are an inevitability. They happen to people who lifts weights regularly, and those who just look at weights. They happen when doing something as inane as bending over to tie your shoes, as well as when you’re doing some less inane, like, fighting crime at night. They happen on a Wednesday. There’s no… END_OF_DOCUMENT_TOKEN_TO_BE_REPLACED