The Difference Between External and Internal Impingement of the Shoulder

Not to play the hoity toity Jonny Raincloud card, but the words themselves – shoulder impingement – is a garbage term.

It doesn’t really mean anything.

To one degree or another your shoulder is always being “impinged.” So when you or your trainer or someone with more letters next to their name (or the Easter Bunny) says “you have shoulder impingement” when your shoulder hurts, they’re not really saying anything significant and just playing the Captain Obvious card.

The thing about shoulder impingement is that it’s very much a real thing. Like I said, everyone lives with it. While it’s a watered down description, when people refer to impingement they’re typically referring to compression of the rotator cuff – usually the supraspinatus, and over time, the infraspinatus and biceps tendon – by the undersurface of the acromion.

[Except for when it’s not and we’re talking about INTERNAL impingement. More on this below.]

This happens all the time – even in quote-on-quote healthy shoulders. It’s inevitable. It’s anatomy.

But the degree of impingement is what we’re really alluding to here.

In other words: the rotator cuff (RC) gets “impinged” by the acromion due to a narrowing of the space between the two.

In (other) other words: you have an ouchie. Or, for the non-PG people in the crowd “your motherfuckin shoulder hurts!”

98% of the time this type of impingement results in bursal-sided rotator cuff tears, and as Eric (Cressey) has noted on numerous occasions “happens more with ordinary weekend warriors and very common in lifters (not to mention much more prevalent in older populations).”

The thing that irritates me is that telling someone they have a shoulder impingement – assuming there’s pain present – doesn’t speak to the root cause of why their shoulder is flaring up in the first place.

They wore green on a Thursday?

Moreover there are different kinds of impingement (external and internal; and the former has different categories: primary and secondary) which manifest in different ways, in different populations, and will require different approaches.

It’s beyond the scope of a blog post to peel back the onion on everything related to shoulder impingement – for that you may want to check out Eric Cressey and Mike Reinold’s Functional Stability Training series. But I did want to take some time to provide some information and help any trainers or coaches or anyone in the general population reading be able to differentiate between the different types of impingement and the mechanisms behind them.

This is the one that’s relevant to most people reading, and the one we’re discussing when referring to anything related to the rotator cuff being impinged by the acromion via bursal-sided impingement.

Here someone can usually point to pain on the front of the shoulder and things like overhead pressing, bench pressing, and approximation hurt.

In addition to pain during those activities, another way we can distinguish if it’s (most likely) external impingement – is by implementing two simple screens. 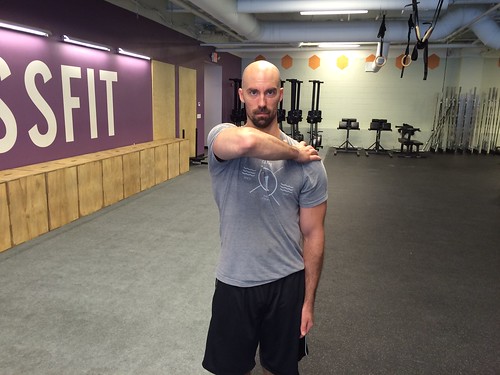 This is the exact screen the FMS uses to “clear” someone for impingement. Place palm of one hand on opposite shoulder and, without allowing your palm to come off the shoulder, lift your elbow. 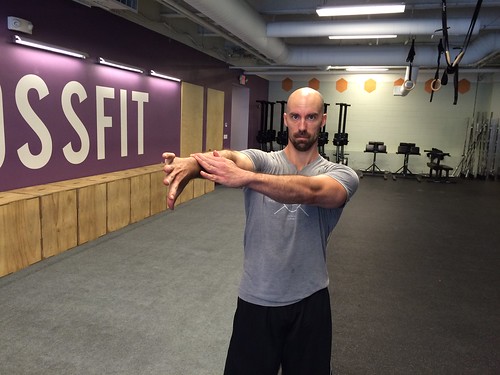 Place one arm in scapular plane thumb facing down and gently press down with other hand.

Pain with either of the two?

I’d seek out a reputable health professional to do a little more digging.

Read (NOTE TO PERSONAL TRAINERS AND STRENGTH COACHES): you’re not diagnosing anything. These are screens. Nothing more, nothing less. It’s information.

That’s like saying, “Oh, banging your head against a wall hurts? Lets do more of it!”

Anyhoo, like I said those are two very easy screens you can add into your arsenal to help gather information.

But this still doesn’t speak to WHY someone may have external impingement. And here’s where things get even more interesting.

This can be considered more of a morphological/structural issue (and as it happens, what we have less control over).

Ever watch some old-timers train and they’re able to perform endless sets of overhead presses, upright rows, and bench pressing without their shoulder(s) ever hurting?

Most likely it’s because they have a Type I acromion.

Then there’s you, who just thinks about upright rows, and your shoulder flips you the middle finger. You may have a Type II acromion (more narrow space).

Outside of an x-ray (and surgery) this is something you’re never really going diagnose and solve. But it can speak to how you’d alter your programming to better fit your anatomy.

This is where the rest of us live and plays into more lifestyle factors. This is more or less things we have control over.

Here’s where it’s the trainer’s or coach’s job to figure out which of these is the culprit (often it’s a number of them).

Unless you’re involved in overhead athletics, chances are you don’t have this.

With internal impingement someone with describe it as “inside” the joint and will generally point towards the back of the shoulder. Too, it will typically only hurt when they’re in excessive external rotation (think: cocked back/lay-back position for a pitcher).

As Mike Reinold notes: “as you move into humeral external rotation, the more aggressive it is, the more likelihood one will feel a pinching sensation towards the posterior-superior aspect of the glenoid.”

This basically alludes to the “inside” feeling described above.

Internal impingement deals with more of the ARTICULAR side of the rotator cuff, and specifically refers to the contact between the articular side of the supra/infraspinatus and the posterosuperior rim of the glenoid. The more external rotation (lay back) one goes into, the more internal impingement will arise

And, as Reinold notes, “we don’t get internal impingement from sitting at our desks. It happens when people use their arms in an extreme abducted & externally rotated position.”

So, in short: unless you’re throwing a baseball during your lunch hour (or fighting centaurs1, you don’t have internal impingement.

Regardless in this scenario we’d want to place a premium on addressing scapular position (improve upward rotation), as well as address any shoulder instability. Overhead athletes are notorious for having super lax shoulders, so anything we can do to improve that – rhythmic stabilizations – would be ideal. That, and make sure they perform exercises like push-ups and row variations correctly.

Whew, I hope that all made sense. Like I said this wasn’t meant to be an all-encompassing diatribe on everything shoulder impingement, but I hope I was able to get you out of the weeds a bit on the topic.

Oh, And There’s This

This post is just the tip of the iceberg in terms of all the things I cover as part of mine and Dean Somerset’s Complete Shoulder and Hip Blueprint:

We discuss and breakdown anything and everything as it relates to shoulders and hips, obviously. Including but not limited to anatomy, assessment, corrective exercise, performance training, programming, etc, in addition to analyzing World of Warcraft strategies. Because, nerds rule.

Fair warning: This will not be an all-encompassing post on how to train the shoulders or how to program around nagging shoulder injuries. Frankly, I don’t think anyone wants to read a Dostoyevsky length diatribe on shoulder impingement or how improving scapular upward rotation leaves me sexually aroused. Yep, I’m weird. Instead I want to give… END_OF_DOCUMENT_TOKEN_TO_BE_REPLACED