10 Steps To Dominate Your Deadlift Technique

The better title of this post should be: “10 Steps To Ensure You Won’t Destroy the Back Of Your Pants (With Your Spine) When You Deadlift.”

The deadlift, as with any compound movement, requires precision and attention to detail in order to 1) Perform it well 2) Not get hurt and 3) To have any shot at lifting appreciable weight. There are many moving parts to the lift, however, to speak candidly, of the “Big 3,” the case could be made it’s the least technical.1

This is not to insinuate it’s altogether easy or simple. Simple in concept? Yes. I mean, picking a barbell up off the ground and locking it out isn’t rocket science. Simple in execution? Well, that’s where things get a bit more complicated.

Below are some overarching (<—Ha, pun intended) “themes” with regards to setup and execution of the deadlift I feel are important across the board. The internet likes to argue. It’ll argue whether or not the dress was gold or blue (remember that stupid debacle from a few years ago?), DC vs. Marvel, high-bar vs. low bar squats, and/or who’s the most bad-ass He-Man character not named He-Man.

More cogent to the topic at hand, people will also argue on the internet that anyone who SUMO deadlifts is cheating.

The prevailing, uppity, train of thought is that, because one is closer to the ground when performing a SUMO deadlift (compared to a conventional stance) it’s easier and thus it’s cheating…and somehow less relevant of a lift.

To which I say: bull to the shit.

Unless your name is Professor Dumbledore and can somehow make someone’s femur change length when they switch from a conventional stance to SUMO stance…the whole “it’s less ROM, it’s easier” argument is a moot one.

What you lose in the sagittal plane during conventional, you gain in frontal plane when performing SUMO style deadlifts.

Generally speaking (due to the moment arms and levers at play):

Conventional Pulls: easier/faster off the ground, harder at lockout.

SUMO Pulls: harder/slower off the ground, all out sexification at lockout.

Stephanie Cohen hit a 525 lbs deadlift at a bodyweight of 123 lbs recently. It was done SUMO.

True to form, (some of) the internet projectile vomited all over itself calling her out, saying it didn’t count, and that it’s not real powerlifting (I guess because she was using straps?).

1. Hahahahaha. I have to assume most commenters calling her out couldn’t sniff her warm-up weight.

2. Um, the lift didn’t take place at a powerlifting meet. So thanks for making the stupidest argument you could possibly make.

[For the record: most powerlifters I know are some of the most respectful, courteous, and supportive people I know. They would never turn their nose to such an impressive lift.]

Step one to successful deadlift technique is to figure out what style feels best FOR YOU.

What feels better? What feels more powerful and stable? Which one places you in the best position possible?

Some people will do well with conventional style, while others may prefer SUMO. Both are fine.

2) Get Your Air, Set Your Ribcage

Gone are the days of cuing people to excessively arch their backs. Gross, repetitive extension can have just as many negative ramifications on spine health as gross, repetitive flexion. Ideally we want to shoot for more of a canister (or pillar) position where the pelvis and ribcage are “stacked” on top of one another. Most specifically, the pelvic floor and diaphragm are stacked on top of each other.

I like to cue people to get a big gulp of air and aim for 3D expansion (breathing into their stomach, sides, and back) before bending over to grab the bar.

Admittedly it takes a bit of practice but makes a profound difference in how the lift feels.

3) Chest Up, Show Me Your Logo

This is a cue I stole from Eric Cressey and a staple at Cressey Sports Performance. Generally speaking I like to see the following on the deadlift setup:

This isn’t the case for everyone, mind you, but a good rule of thumb to follow. This will ensure most people stay in a “neutral” position and offset the bulk of shear forces on the spine. 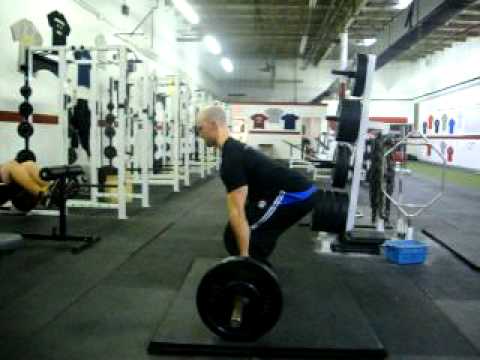 I’ll often stand in front of an individual and just say “show me your logo the entire time” as he or she descends down to the bar.

The end result should look like the picture above.

If not, this happens:

Regardless of style of pull, the goal with one’s set up should be armpits over the bar with maximal hamstring tension.

This will help ensure 1) hips are as close to the bar as possible (without making it too squatting. In that case the hips are actually further away….laterally) and 2) people will be less likely to pull via the lower back.

The lats are a big player with regards to deadlift technique. You want to make sure they’re “set” to help with upper back stiffness during the lift itself.

The best cue I’ve used to help with this is to tell someone to “squeeze the oranges in your armpits.”

6) Pull Slack Out of the Bar or Bend the Bar

The deadlift is just as much of a PUSHING exercise as it is pulling. You want to generate force into the ground and drive AWAY, thrusting your hips forward as you stand up.

People who solely focus on pulling the weight up – via their back – are often the ones that complain about it low back pain the most.

8) Finish at Top or Stand Tall

A common mistake I see some trainees make is either not getting their hip through at the top (AKA: the sexy stripper butt) or going too far.

“Hump the bar” at the top. Finish. Stand tall. All are cues I’ve used that work and get people to finish with their glutes.

On the descent, don’t let go.

It’s here where I’ll often see people round their shoulders or lose their upper back position. And it makes me sad.

Keep your abdominals engaged (and keep squeezing that orange), even on the way down.

10) Reset or Peel the Shoulders

There’s a time and place for tap-n-go deadlifts, but I have to admit I rarely use them. Instead I’ll tell people to “reset” between each rep – albeit it’s brief – to gulp their air, “peel their shoulders back,” and to make sure they’re in a good position for the next rep.

The video below is of me demonstrating this with a dumbbell, but you should still get the gist:

These Aren’t Set in Stone

None of what I said above is concrete.2 There will always be some slight deviations based off someone’s anatomy, ability level, and goal(s).

However, I have found that for most people, most of the time, they all work really well to get people’s technique in check.

Being human means being enamored by a litany of things in the health/wellness/physical preparation realm. Some people are easily swooned by fancy watches and elaborate looking exercises Others by cryochambers and Paleo recipes that taste like sawdust. I am not here to play judgement police. For the most part, everything has a time and place… END_OF_DOCUMENT_TOKEN_TO_BE_REPLACED

Back tweaks are an inevitability. They happen to people who lifts weights regularly, and those who just look at weights. They happen when doing something as inane as bending over to tie your shoes, as well as when you’re doing some less inane, like, fighting crime at night. They happen on a Wednesday. There’s no… END_OF_DOCUMENT_TOKEN_TO_BE_REPLACED