What’s the REAL Key to Progress?

I finished a really interesting book not too ago called Why We Make Mistakes: How We Look Without Seeing, Forget Things in Seconds, and Are All Pretty Sure We Are Way Above Average. 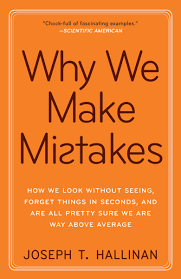 I love reading books like this, which talk extensively on behavioral economics, because a lot of what is discussed (even if it isn’t directly) can be applied to what it is that I do on a daily basis: which is to help people get bigger, faster, stronger, and, if we play our cards right, make the opposite sex want to hang out with them. In short, a lot of what I do is to get people from suck to less sucky.

While the entire book was fantastic, there was one chapter in particular (We Can Walk and Chew Gum – But Not Much Else) that I felt hit the nail on the head with regards to basic human behavior.

I’m sure everyone reading this can relate to a point in time where they started one project, only to be juggling any number of things five minutes later. One minute you’re trying to iron your sweater vest for a classic poetry reading later on that night you’re taking part in to benefit the orphaned kittens foundation, only to be interrupted by a phone call from your girlfriend asking if you could pick up some milk, blah blah blah, OMG, you have to check this out!11!11!!1

Next thing you know, that sweater vest is completely ruined because you left the iron on if for too long!

You pickin up what I’m puttin down?

In a nutshell, we’re forgetful. That switching from task to task causes us to forget what we were working on in the first place; in some cases, the forgetting rate can be as high as 40%.

Additionally, using car safety as an example; driver distraction is now considered a much more frequent cause of auto accidents that safety officials once believed. One estimate, as noted by the author, found that in about 78% of crashes, and 65% of near crashes, the drivers were either looking away or engaging in some secondary task: text messaging, fiddling with stereo, etc. What’s more, it doesn’t take much to distract a driver. A two-second glance doubles the risk of an accident.

And, speaking of being distracted:

Okay, I actually have a point to all of this. Knowing what we know above (switching tasks numerous times increases our likelihood to forget things, not to mention increases our affinity to be distracted): why, then, do we think we can get away with switching our goals on a month to month basis? Nothing frustrates me more than when I’m dealing with a flip-flopper.

You all know what I’m talking about. One month you want to focus on getting stronger. The next month rolls around, and you want to focus on fat-loss. Two weeks later you read an article online that’s supposed to add 17 inches to your biceps in five minutes – you’re all over that!

Should it come as any surprise that many trainees are left frustrated that they’re unable to make any progress? Is it any wonder they’re still weak, skinny-fat, out of shape, and still living in their parent’s basement watching Glee? This is training ADD at it’s finest.

We get so caught up in trying to do EVERYTHING at once, that we often forget our original goal in the first place.

I don’t care if your goal is to deadlift “x” amount of weight, lose 10 lbs of fat, or curl in the squat rack till you vomit in your face; the real key here is, what’s really going to determine whether or not you succeed, isn’t how many different programs you can follow in a year. The answer is real simple: commitment and consistency.

I know many of you have probably heard this before, but the best program is the one you’re actually going to follow.

Take Show and Go, for example. I’ve seen first hand people lose A LOT of fat (not to mention get a heckuva lot stronger) following this program. Why? Because unlike most people who flip-flop back and forth between programs on a month-to-month basis, they actually stick with something in it’s entirety – with Show and Go, we’re talkin four months! When’s the last time you followed the same program for that long? There’s a lot to be said about being consistent.

So, if I had to summarize this whole post it would be this: pick ONE goal and attack it like a bastard. Don’t flip-flop – you’re just going end up spinning your wheels in the end. As Dan John has said on numerous occasions, “your goal to keep the goal, the goal.” Sounds like a plan to me.

Being human means being enamored by a litany of things in the health/wellness/physical preparation realm. Some people are easily swooned by fancy watches and elaborate looking exercises Others by cryochambers and Paleo recipes that taste like sawdust. I am not here to play judgement police. For the most part, everything has a time and place… END_OF_DOCUMENT_TOKEN_TO_BE_REPLACED

Back tweaks are an inevitability. They happen to people who lifts weights regularly, and those who just look at weights. They happen when doing something as inane as bending over to tie your shoes, as well as when you’re doing some less inane, like, fighting crime at night. They happen on a Wednesday. There’s no… END_OF_DOCUMENT_TOKEN_TO_BE_REPLACED