How to Become a Beautiful Badass

I’m baaaaaaaaaack.  Sorry for the delay in getting anything up this week, but as you all know, Operation Co-Habitation was in full swing this past weekend.  And, while everything is moved in and essentially put away (for the most part) – we’re also dealing with all the new quirks that come with living in a new apartment.

For instance, we already blew an electrical circuit running the microwave and toaster oven simultaneously (note to self:  might have to nix plans for that 70” flat screen in the bathroom).  And, on top of that, we have a bit of a mouse issue.

It could be worse, but while un-packing on Sunday, Lisa was in the hallway when she saw a mouse scamper across the kitchen floor.  MOUSE!!!

I sprang into action, jumped off the couch, and went into Commando mode.  Unfortunately, I have yet to catch the little bastard.  He’s like a mouse-ninja.  One second he’s there, I turn away to grab my slingshot, and then I turn back around and he’s gone.

Nonetheless, all in all, the place is awesome and we’re happy to be settled down in our new place.

So, with that out of the way, I want to turn your attention to an awesome new product that was just released by my good friend Nia Shanks, titled: 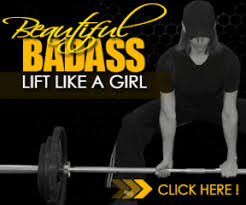 Nia, as many who read this blog on a daily basis know, not only talks the talk, but she definitely walks it as well.

Yes she’s a girl, and yes, she likes to lift heavy things.  Deal with it.

As a competitive powerlifter – at a bodyweight of 120 lbs no less – she’s deadlifted more than most guys (320 lbs), and I’d be willing to bet, speaking from an athletic perspective, she could give most gents a run for their money in a lot of others things, too.

Most importantly, however, is how much I respect her for consistently taking on the upward battle of trying to convince women that it’s okay to TRAIN.  Not workout, but train.

Unlike the walking ham sandwich that is Tracy Anderson (or any other “celebrity” trainer spewing out nonsensical information) – with her ridiculous claims that women should NEVER lift a weight more than three lbs, because, according to her, “we shouldn’t be lifting heavy weights that focus on big muscle groups, because it will bulk us up, it is all about focusing on the small muscles and tightening them, this is what metamorphosis is all about” –  Nia is the antithesis.

Rather than placating into the nonsense, Nia asks women to step away from the stupid, grab a barbell, and lift some freakin weights!  While the mainstream media will go out of its way to promote things like Zumba, yoga, pilates, step aerobics, or [insert any other foo-foo flavor of the day here], Nia suggests that if you’re really serious about taking your body to the next level, you need to be lifting things.  Preferably off the ground.  And sometimes over your head.  Repeatedly.

And for the record: those neon colored dumbbells that are in the women’s only section of your local commercial gym don’t count.  Nice try.

This isn’t to say that any of the above classes are worthless or a complete waste of time – they can definitely play a role in the grand scheme of things.  But you’re clenching at straws if you think those classes alone are all you need to get into badass shape.  Chances are you’re STILL going to look frail, small, and weak.

To that end, Nia took matters into her own hands and Beautiful Badass can to fruition.

I was lucky enough to be one of the first people to read the original draft back in March, and I have to say, I was impressed from the get go.  I couldn’t help but nod in agreement throughout, and I was really excited to see what Nia would come up with after going through all of her edits

She didn’t disappoint, that’s for sure.

So by now, you might be thinking to yourself: “how is this program any different than any other program I can purchase off the interwebz that’s catered towards women?”

Well, I could say how it includes ample warm-ups, foam rolling, emphasizes compound movements (squats, deadlifts, chin-ups), doesn’t include ANY machines, utilizes single leg work, focuses on the posterior chain and core stability, blah blah blah –  you know the drill.  But n reality, that can be said about programs geared towards dudes, too.

Nope – if I had to pick what separates this program from any other that’s geared towards women it would be this:  it has balls.

Yeah, I know:  I just used a “guy” term to describe a woman’s program, but I really couldn’t think of a better way to describe it.   Sorry!

In an age where women are treated like delicate snowflakes and are incessantly told that they can’t (or shouldn’t) lift any appreciate weight, Nia’s Beautiful Badass states otherwise.

Training like a girl doesn’t mean you’re relegated to “toning classes” or using those pointless abductor/adductor machines.  Please, no – step away, STEP AWAY!  Rather, all you need to get the body you truly desire is a barbell, minimal equipment, and a little attitude – and Nia shows you how.

I’ve been a fan of “offset” loading for a number of years now. Without getting too deep in the weeds on what offset loading is and what the benefits are… …it’s when you either stagger your foot or hand position on certain exercises OR you load an exercise a certain way (how you hold a… END_OF_DOCUMENT_TOKEN_TO_BE_REPLACED

Last week I received an email from Jon Goodman. At first I thought he was going to extend an invite to me to come up to Toronto for a weekend of watching Jean Claude van Damme movies. But that wasn’t the case. Fingers crossed for next time. Nope, instead Jon was curious if I’d be… END_OF_DOCUMENT_TOKEN_TO_BE_REPLACED