Shut Up and Lift

I had the pleasure of doing an interview for Jon-Erik Kawamoto’s site last week, and without tooting my own horn, I have to say it’s arguably one of my best ones, like, ever.

To read it in its entirety, you can go HERE.

JK: From stalking you on Facebook and your blog, I know there is nothing more important in your life than deadlifting and bacon (and your new cat). There are a kagillion articles on deadlifting out there. In your expert opinion, what’s the best method/program to deadlift two ton Tessie?

TG: That is true, I do love bacon. And, it’s funny: if you would have told me five years ago that I’d eventually own a cat, I probably would have 1) laughed in your face, and 2) make some kind of joke that I was more likely to listen to John Mayer while eating tofu in my Prius on my way to a yoga class.

But it’s true, my name is Tony Gentilcore, and I own a cat (Dagny).

Who’s the most beautifulest pretty Princess on the planet???? You are, that’s who. So bringing this to a more manly discussion, lets talk about deadlifts! What’s the best method/program to pull over two ton Tessie?

1. For starters, I really wish people would just get off the freakin internet, go to the gym, and actually lift some heavy shit. There are countless “internet warriors” out there that all they do is talk and talk and talk, and speculate, and argue, and brag about how many posts they have on any given forum, and any number of other things equally as dumb, and yet forget one key component: you need to actually lift some damn weight!

Stop talking, get your ass to the gym, place some weight on the bar, get angry, and then lift it……sometimes repeatedly.

2. Speaking more colloquially, it really comes down to one simple concept:

Here’s a personal reference. I didn’t start deadlifting until 2004. I shit you not, you can probably find posts on T-Nation where I’m asking people “what are these deadlifts you speak of?” 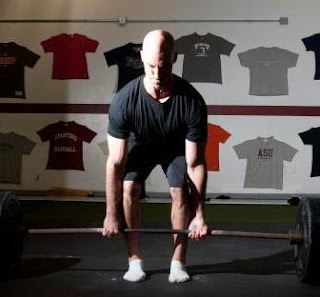 body part per day split. Chest day, back day, blah blah blah. Trust me, a little piece of my soul dies just thinking about it. I can’t even begin to tell you how much I cringe looking back at how I trained as a high school and even collegiate athlete. If I ever had the chance to take a time machine back to 1994, I’d totally go back and Sparta kick myself in the face.

While I laugh and make fun of it, you know what? I always, and I mean ALWAYS had it in my mind to consistently try to lift heavier loads – whether it was adding a rep here and there, or incrementally increasing the load. That just made sense, ya know? I didn’t need anyone to tell me otherwise.

Anyways, so I started reading a few things here and there and slowly but surely started to understand that, for lack of a better term, I was training like a moron. I started incorporating deadlifts into my weekly training. I nixed the leg press, and started learning to squat to depth (a very humbling experience I might add).

One day I decided to test my 1RM deadlift. Mind you, I had NEVER tested my 1RM before. On day one I hit a 420 lb lift. Not too shabby. The kicker? I didn’t even train for it. All I did was focus on progressive overload. I wasn’t on internet forums arguing about foot placement or set/rep schemes or whether or not Han shot before Greedo (token Star Wars reference there). I was in the gym. Training.

Shut up, and train. It’s that simple. If more people did that…….they’d see marked improvements in their lifts.

I know that that wasn’t the “x’s and o’s” answer you were looking for, but I just feel that we’re living in an age where people are so inundated with information, that they’ve become paralyzed. It’s literally gotten to the point where people over-think things so much – should I do 5×5 or 4×4; So and so said I should wait 47 seconds between sets in order to elicit optimal growth hormone elevation; For max strength, this article said to use a 212 tempo, but my best friend’s brother’s second cousin’s Little League coach said to use a 311 tempo – that they forget one crucial thing.

To read the rest of the interview (it’s pretty awesome) go HERE.

I received a question recently via my Instagram DM’s and figured it prudent to take some time to write a more thorough response I could share with the masses here. 1. I hope it helps and makes sense. 2. Um, why aren’t you following me on IG? Here’s the question: “What is your response to… END_OF_DOCUMENT_TOKEN_TO_BE_REPLACED

Fitness professionals are notorious for myriad of things: Wearing sweatpants to work everyday. It’s definitely one of the perks of the job. Always forgetting about the protein shake shaker in their gym bag (or in their car) that invariably, three weeks later, ends up melting someone’s face off once it’s opened. Their affinity for smedium… END_OF_DOCUMENT_TOKEN_TO_BE_REPLACED