To some degree, I’m the sort of person people hate.

Although, hate IS a strong word.

I mean it would be one thing if I cut you off in traffic, insulted your mom, borrowed money from you and never paid it back, or worse, drop kicked a puppy in the face.  Then, by all means, you’d have every reason to hate away.

Maybe “mildly irritated” would be a more appropriate phrase to use here.

You see I’m one of those guys who’s always been lean. As a kid growing up in MiddleOfNoWhereAndTheClosestGroceryStoreIsTenMilesAway, NY, I was very active. What else was there to do?

It’s not a fabrication or a stretch of the truth when I say I literally spent the majority of my time outside playing every sport imaginable.  From sun up to sun down – especially during the summer months – I was outside riding my bike, shooting hoops, playing baseball, wiffle ball, kickball, or any other sport you can name that ends with the word “ball” in it.

I’d go swimming, play catch, toss the football around, go exploring with my dog, Daisy, and sometimes, if was feeling really dangerous, stay up past midnight.

Furthermore, like any other kid, I drank my fair share of Kool-Aid growing up (looking back, I shutter at the amount of sugar I drank back then) and I can’t even begin to tell you how many boxes of cold cereal I dominated – Fruit Loops, Frosted Flakes, Apples Jacks – you name it, I crushed it.

Even still, sugar and all, I was skinny bastard!  In large part, and I’m very thankful for this, I didn’t grow up in the digital/technology age. Sure, things like VCRs were a big deal back in the day.  I can remember one weekend when my mom rented (yes, rented) a VCR player and I watched Return of the Jedi in my living room with while wearing my Jabba the Hut pajamas.

It was pretty much the best day of my life.

“Stuff” existed back then – cd players, walkmans, microwaves, Thunderpunch He-Man, etc., but no where to the degree that things exist now.

Today, you’re more apt to find groups of kids spending more time texting or huddled around a tv screen playing Halo against other kids from the next state over or even from across the globe, than you are finding those same kids outside on the baseball diamond.

It’s sad, and a discussion that can be saved for another day – I’m getting way too long winded with this intro.  What the hell was I talking about again?

That’s right:  how skinny I was.

Yeah, I’ve always had “abs,”  but when you’re as skinny as I was growing up, it pretty much defeated the purpose.  Abs on a skinnu guy don’t count!!!

Even as my athletic career took off through high school and onto college, I was always on the skinny side.  I graduated high school weighing like 155-160 lbs, and even as I entered my senior year in college, I was only 175 or so lbs at six foot one.  Not a ladies man by any means.

I had abs, but you know, they were “skinny guy” abs.

It wasn’t until I stopped playing baseball, finished my degree in health education at SUNY Cortland, and got my first job in corporate fitness (this would have been 2002) that things started to click.

To make a long story short, I was sick of being skinny.  At that stage in my life, I had been a gym rat for a looooooong time, and to my credit, built a decent physique. But I was still doing stupid things like “arms day,” not eating egg yolks, and even more heart wrenching, averaging like 15-20 miles per week of running.

Dramatic chipmunks aside, it was something I actually enjoyed doing, but there came a point where I had to come to the realization that doing that much running wasn’t helping me attain my goals.

In the summer of 2003 I decided I was going nip things in the bud and attempt to get to a bodyweight of 200 lbs  – a seemingly insurmountable number in my head, especially given my struggles to hover anywhere in the vicinity of 180.

It’s that word insurmountable that really toyed with my head, though.  In the past, whenever I tried to gain weight, it’s like I had already programmed myself to fail from the get go, thinking I could never reach that mark of 200 lbs.

But I decided to chip away at it nonetheless.  My first order of business was changing my training from a body-part-per-day split to more of a full-body approach.  As weird as it sounds, and as shocking as it may seem, I didn’t perform my first deadlift until 2003 (when I was 26).

Once I got the hang of that, and realized it was’t that hard to make subtle changes, I started tweaking other things in my life.  I started eating more whole eggs.  Glorious, delicious, cholesteroly, whole eggs.  I also realized the world wouldn’t collapse in an Apocalypic hellfire if I ate a carb past 7 PM.

Moreover, as the months passed and I started gaining momentum, I made other changes.  I decreased my distance running drastically and opted for more sprinting type work; I started prepping my meals a head of time; hell, I even said hi to a girl once.

And yes, I’m still lean thank you very much.

So, what does all of this have to do with you?  Well, I recently finished reading a phenomenal book by Charles Duhigg titled The Power of Habit:  Why We Do What We Do In Life and Business.

Not to throw a spoiler in your face or anything, but the book is about habits – what they are, how they form, and what we can do to set new ones. 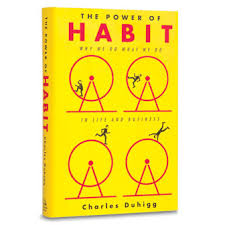 In one section, the author describes what he refers to has Small Wins that I felt carried a lot of weight in terms of one of the book’s main messages.

Small wins are exactly what they sound like, and are part of how keystone habits create widespread changes.  A huge body of research has shown that small wins have enormous power, and influence disproportionate to the accomplishments of the victories themselves.  “Small wins are a steady application of a small advantage,” one Cornell professor wrote in 1984. “Once a small win has been accomplished, forces are set in motion that favor another small win.”

Small wins fuel transformative changes by leveraging tiny advantages into patterns that convince people that bigger achievements are within reach.

Using a more universal example, lets say someone wants to lose weight.  They walk into their local bookstore and mozy over to the diet/nutriton section and choose from the cornucopia of diet books available.  In it the book suggest that they need to drink more water, eat more vegetables, and fruit, include more protein, take their fish oil supplement, exercise more, avoid carbs at all costs, except for post-training (or if it happens to be an even numbered day in a leap year), oh and by the way, you should only buy organic foods.

It’s A LOT to take in, and to say that it can feel pretty freaking overwhelming would be an understatement akin to saying the Grand Canyon is kinda big.

Many will reluctantly make an effort to change (I CAN do this, easy peezy), but while intentions are good, it’s only so long before said person feels lost and reverts back to old habits.

It’s just too much to take on so many things at once – and it’s a mistake that everyone (myself included) makes.

Instead, start small.  Start with ONE habit – say, eat one more serving of greens per day.

Once you master that, and it becomes a habit, you can move onto something else like getting a gym membership and starting with making an effort to go twice per week.

Once you know you can do that, you can up that number to three, maybe four times per week.

It’s all about those small wins – and this can be applied to anything, really.

Getting out of credit card debt.

Training for a marathon.

The key is to not fall into the trap that you have to tackle everything at once. It doesn’t matter how trivial or minute the small win is…..any win is a step in the right direction.

Fair warning: This will not be an all-encompassing post on how to train the shoulders or how to program around nagging shoulder injuries. Frankly, I don’t think anyone wants to read a Dostoyevsky length diatribe on shoulder impingement or how improving scapular upward rotation leaves me sexually aroused. Yep, I’m weird. Instead I want to give… END_OF_DOCUMENT_TOKEN_TO_BE_REPLACED