Stuff To Read While You’re Pretending To Work: Intervention, Foam Rolling, and a Return to Kipping Pull-Ups

I’m pretty excited today (and not because my birthday is in two days, hint hint hint). In actuality I have to head to the facility early this morning because one of the people from the Postural Restoration Institute (PRI) who lives in or near the Boston area is stopping by to do a short two and half hour staff in-service for us and it’s going to be awesomesauce.

Eric has been to a few of the modalities and Greg (Robins) recently attended one a few weeks ago, and within the past year or two we’ve implemented a fair amount of the PRI philosophy into the programming of our athletes and clients.

For those not in the know:  much of the dialogue revolves around breathing patterns and helping to engage the diaphragm more effectively.  Admittedly it’s much more involved than that, but at the expense of oversimplifying things, I’ll leave it at that.

Lets just say that there’s a huge likelihood that I’ll only be able to understand and compute 37% of what’s said.  God I hope they bring coloring books!

Note:  I’m not kidding.  If you were to go to one of their actual seminars, because there’s a heavy emphasis on anatomy, they have people use coloring books to help with the learning process.

Just to throw it out there, if they really wanted to take it to the next level they’d somehow incorporate glitter paint and a smoke machine.

Anyways, I’m excited and looking forward to making my brain feel like mush.

In the meantime, here’s some stuff to read to keep you occupied.

I don’t feel I have to go out of my way to state how much of a fan I am of Dan John. 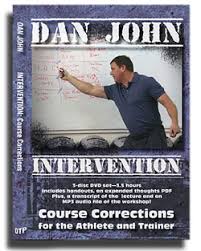 He’s undoubtedly been a huge influence on my career, and I’ve highlighted pretty much everything he’s ever written on this site.

In a sense, it’s an invaluable guide to anyone who coaches people or who’s interested in not sucking in the gym.

This was an excellent article which, surprisingly (I really didn’t know this), shows how there’s been very little research done with regards to the efficacy of foam rolling.  Much of what we know (and recommend) is based solely off anecdotal evidence (which isn’t a bad thing).

Basically at the end of the day, while there should be more research done on the topic (no one really knows how long, how often, and when to do it), I also feel that the “real world” evidence is clear.  I’ve seen with my own eyes people reap the benefits of foam rolling and feel it’s an invaluable tool in the tool box.

Still, I really liked this article in that it took an unbiased viewpoint and laid out what (little) research these is thus far.

Do Not Kip Your Pull-Ups Before Reading This – Dave Hedges

A few weeks ago I wrote a popular post (in the context of it making its rounds around Facebook) titled All the Hype Behind Kipping Pull-Ups, where I expressed my opinion on this controversial exercise.

I’m not going to get into it here (you can click on the link above), but needless to say I’m not a fan.

The impetus for the post was to note that I don’t feel that they’re a good fit for the vast majority of people who perform CrossFit.  It’s one thing if you’re already strong, have a solid training foundation, or have a fair amount of training experience.   There’s a reason why the top CF athletes don’t (generally) hurt themselves (as much).

As it happens, I’m not the only one who feels the same way.  Strength coach Dave Hedges offers his opinion on why kipping pull-ups probably aren’t the best choice for most (not all) people.

Also note the informative link he provides discussing the overwhelming amount of SLAP tears in the CrossFit community which can be directly linked to the kipping pull-up.

And remember, it my b-day on Friday!  I wear large t-shirts, 10.5 shoes, and I’m pretty sure Alicia Keys just came out with a new album.  Sooooo, yeah,  just sayin…….

I received a question recently via my Instagram DM’s and figured it prudent to take some time to write a more thorough response I could share with the masses here. 1. I hope it helps and makes sense. 2. Um, why aren’t you following me on IG? Here’s the question: “What is your response to… END_OF_DOCUMENT_TOKEN_TO_BE_REPLACED

Fitness professionals are notorious for myriad of things: Wearing sweatpants to work everyday. It’s definitely one of the perks of the job. Always forgetting about the protein shake shaker in their gym bag (or in their car) that invariably, three weeks later, ends up melting someone’s face off once it’s opened. Their affinity for smedium… END_OF_DOCUMENT_TOKEN_TO_BE_REPLACED