1. I’ve got some exciting news to report.  No, Matt Damon isn’t reprising his role as Jason Bourne. No, a group of Victoria Secret models haven’t moved into the vacant apartment upstairs.  And no, unfortunately, Justin Bieber hasn’t fallen into a live volcano.

While all of those things would be pretty awesome, what I have to share today could very well tear a hole into the space-time continuum and alter all of human existence.

Slight exaggerations aside, Dean Somerset and I are tentatively planning an East coast/kinda Northwesternish (like way up north, like where it’s only warm like twelve days out of the year north) coast two-day workshop later this summer and fall.

We’re shooting for a two-day workshop here in Boston later this summer (and again, up in Edmonton, Alberta in the fall) where we’ll target personal trainers, coaches, and fitness enthusiasts and open up Pandora’s Box to discussing everything from assessment to corrective exercise to program design. But more importantly our goal is to make this a very hands-on (non-creepy) workshop where we have minimal lecture and place more of a premium on coaching!

In Dean’s words:  “We want people who attend to leave knowing about what we discussed, not just intellectually, but how to put it into action immediately when they return, and with enough competence to not have to refer back to notes while doing so.”

Like I said, we’re still in the initial planning stages but we’re excited as shit.  Read:  pretty excited.  I mean, Dean can’t contain himself!

That said, I’d still love for people to sound 0ff on this and let us know if there’s enough interest?

Due to space we’re going to keep this pretty exclusive and limit it to like 30-35 people.  Some candles, a little Sade playing in the background, some Femoral Acetabular Impingement talk.  Who knows where it will go…..;o)

Seriously though, who’s in?

2.  Some other cool news.  For only the second time since its release, Eric Cressey is placing his flagship program, Show and Go: High Performance Training to Look, Feel, and Move Better on sale all this week until THIS Saturday (May 20th) at midnight.

Not that I need to sing its praises or anything, but the program is the bees knees.

I’ve seen with my own eyes countless people transform their bodies and make progress in the gym they never thought possible.  So if you’re still one of the few who have balked at trying it out for yourself, at 48% off the normal price you really have no excuse not give it a whirl. 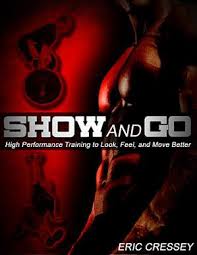 3. As someone who routinely trumpets the message that women should can the Zumba classes and lift heav(ier) things, I’m always trying to relay top-notch, informative, POSITIVE material to the masses to help convey that same tone.

HERE is a fantastic blog post by Dave Hedges on why there’s really no such thing as a “women specific program.”

4. And since I recognize that a fair share of women visit this site on a regular basis, here’s a litte Ryan Gosling for you.

I don’t know about you, but that video cracked me up!

5. And finally, keep your eyes peeled for a future TG original piece on BodyBuilding.com. The higher ups reached out to me last week asking if I’d be interested in contributing some content on a monthly basis, and I jumped at the opportunity.

Of course, my one prerequisite was that I’d be able to discuss the importance of getting stronger and that I wasn’t going to write about pec blasting, bicep pulverizing, or any other broscience shenanigans.

To that end, I just submitted my first article to them last night titled Top 3 Squat Mistakes.

Being human means being enamored by a litany of things in the health/wellness/physical preparation realm. Some people are easily swooned by fancy watches and elaborate looking exercises Others by cryochambers and Paleo recipes that taste like sawdust. I am not here to play judgement police. For the most part, everything has a time and place… END_OF_DOCUMENT_TOKEN_TO_BE_REPLACED

Back tweaks are an inevitability. They happen to people who lifts weights regularly, and those who just look at weights. They happen when doing something as inane as bending over to tie your shoes, as well as when you’re doing some less inane, like, fighting crime at night. They happen on a Wednesday. There’s no… END_OF_DOCUMENT_TOKEN_TO_BE_REPLACED